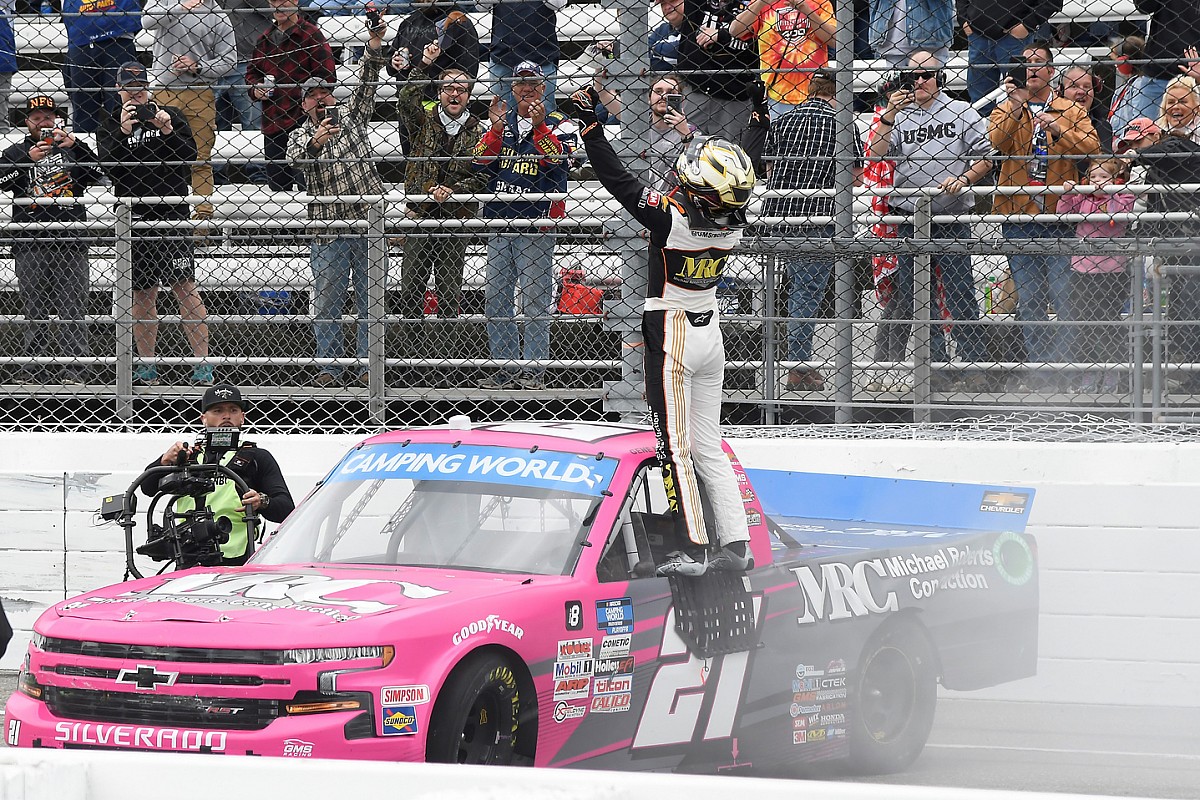 Todd Gilliland dominated most of the race at Martinsville (Va.) Speedway and led the way heading into overtime, but Smith and Stewart Friesen made it a three-wide battle for the lead coming to the white flag of overtime.

Friesen turned Gilliland and also hit Zane Smith, which gave Friesen a flat tire and knocked him out of contention. NASCAR threw the caution for the wreck and Smith was locked in as the leader and declared the winner.

The win is Smith’s first of the season and couldn’t come at a better time. The victory locked him into next weekend’s Championship 4 at Phoenix and a chance to win a Trucks title.

Joining Smith in the title fight will be John Hunter Nemechek, Matt Crafton and Ben Rhodes.

“Man, I did not want Todd in front of me. He’s a good buddy of mine,” Smith said. “Honestly, I got shoved from behind by (Austin Hill). I ticked him off earlier in the race. That’s hard racing.

“Speed-wise, I don’t think we had anything for (Gilliland). I was worried if the race stayed green. I wasn’t losing hope just because you never know what’s going to happen. On the last restart, I got shoved into the corner and I was lucky I came out three-wide on the bottom.”

Smith said he was especially grateful to make the Championship 4 considering he doesn’t have any ride secured for the 2022 season.

Austin Hill ended up finishing second in the race, Tanner Gray was third, Chandler Smith fourth and Crafton rounded out the top-five.

Following the break between Stages 2 and 3, several lead-lap trucks pit but Zane Smith remained on the track and inherited the lead. Nemechek was the first off pit road among those who pit.

On the restart on Lap 111, Zane Smith was followed by Hocevar, Friesen, Grant Enfinger and Corey Heim. Nemechek lined up 11th.

Hocevar briefly grabbed the lead on the restart only to see Zane Smith reclaim it on Lap 112.

Jennifer Jo Cobb spun off Turn 1 on Lap 115 to bring out another caution. The race returned to green on Lap 124 with Zane Smith still in command.

Austin Wayne Self turned Nemechek in Turn 3 and sent him into the wall, bringing an early end to his race.

The race returned to green on Lap 141 with Zane Smith out front, followed by Hocevar and Friesen.

Chris Hacker spun off Turn 4 on Lap 142 after contact from Derek Kraus to bring out the eighth caution of the race. The race resumed on Lap 147.

Sage Karam spun on Lap 149 after contact from Dawson Cram to bring out a caution. Hocevar was penalized for a restart violation and had to restart from the rear of the field following the caution as his penalty.

The race returned to green on Lap 155 with Zane Smith out front, followed by Friesen, Heim and Enfinger.

Parker Kligerman spun off Turn 4 on Lap 157, which brought out the 10th caution of the race. The race returned to green on Lap 164 with Zane Smith still out front.

On Lap 174, Gilliland caught Zane Smith and got around him to reclaim the lead of the race.

Kligerman got into the back of Sauter on Lap 177, which sent Johnny Sauter into the wall and brought out the 11th caution of the race.

The race returned to green on Lap 184 with Gilliland out front, followed by Zane Smith and Friesen.

A multi-truck wreck off Turn 4 on Lap 185 placed the race back under caution. Playoff contender Creed had to pit after suffering some damage in the incident.

The race returned to green with eight laps remaining.

Heim slammed into Cram on Lap 197 to bring out a caution and send the race into a two-lap overtime. On the restart, Gilliland was followed by Zane Smith, Friesen, Gray and Austin Hill.

Gilliland held off Nemechek on a restart with five laps remaining to take the Stage 2 win, completing a sweep of stage victories.

Creed with third, Sauter fourth and Crafton rounded out the top-five.

Following the break between Stages 1 and 2, the lead-lap trucks all pit with Gilliland the first off pit road. The race returned to green on Lap 57 with Gilliland followed by Nemechek, Creed and Rhodes.

Jack Wood spun off Turn 2 on Lap 65 after contact with Cory Roper to bring out a caution. The race resumed on Lap 72 with Gilliland still out front.

Nemechek powered into the lead on the restart only to see Gilliland reclaim the lead on Lap 74.

NASCAR was forced to put the race under caution on Lap 81 for a large piece of debris on the frontstretch.

Several trucks elected to pit but Gilliland remained on the track and in the lead. The race returned to green on Lap 87 with Gilliland followed by Nemechek and Creed.

Just after the restart, Ryan Truex, Josh Reaume and Bret Holmes got collected in a wreck on the frontstretch, which immediately placed the race back under caution.

The race resumed on Lap 96 with Gilliland still out front.

Gilliland took the Stage 1 win under caution due to wreck shortly before the conclusion of first 50-lap segment.

Creed was second, Nemechek third, Rhodes fourth and Crafton rounded out the top-five.

Nemechek started on the pole but Gilliland quickly moved into the lead and led the first lap as Creed moved into second.

With 25 laps remaining in the first stage, Gilliland had built a 2-second lead over Creed with Nemechek in third.

On Lap 29, Hailie Deegan was forced to pit under green with a flat tire after she had contact on the track with Kligerman.

With 10 laps to go, Gilliland’s lead over Creed had grown to over 3 seconds as Nemechek remained in third.

Roper wrecked off Turn 4 on Lap 46 to bring out a caution, which turned out to end the stage.