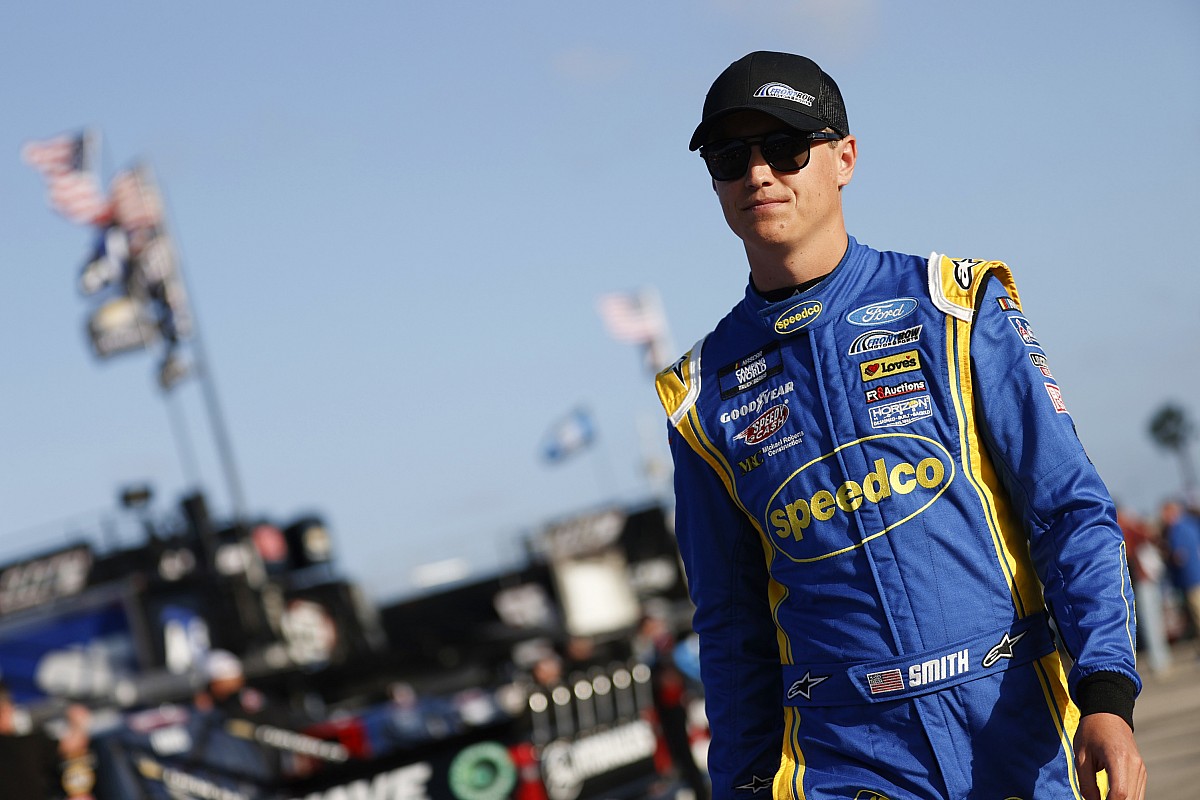 Smith, in his first season driving for Front Row Motorsports, was in position to the race but a 19-truck wreck erupted with one lap remaining and sending the race to overtime.

Smith lined up second on the restart to overtime and powered to the lead with a big push from Parker Kligerman. Another wreck erupted but this time, Smith had already taken the white flag and he was declared the winner under caution.

The win is the fourth of Smith’s Truck Series career and first at Daytona. He is now locked in to the 2022 playoffs. He has finished second in the series standings the past two seasons.

“This is something else,” Smith said. “This place is its own, I’ll tell you that. Man, literally my heart hurt during that late red flag. I thought we had (the win). Man, hats off to this whole group. They really put the work in and it’s so damn cool to see it when it pays off.

“Man, this is going to be a really fun year. I’m going to try to make it a record year for myself. How cool is this?”

Following the break between Stages 2 and 3, the lead-lap trucks all pit with Austin Hill the first off pit road. Brad Holmes spun on pit road during his stop while Majeski required an extended stay in his pit box.

The race resumed on Lap 47 with Colby Howard leading the way followed by Zane Smith and John Hunter Nemechek.

Nemechek was finally able to work his way around Howard on the outside on Lap 52 to reclaim the lead.

On Lap 62, Corey Heim was forced to pit under green for a flat right-front tire.

On Lap 64, Jack Wood spun and wrecked off Turn 2 to put the race under caution. All the lead-lap trucks pit with Nemechek the first off thanks to a fuel-only stop.

On the restart on Lap 68, Nemechek was followed by Howard, Zane Smith, Tyler Ankrum and Stewart Friesen. Howard powered back into the lead on the restart.

Nemechek made a move to the outside to reclaim the lead on Lap 72.

On Lap 80, Heim wrecked off Turn 2 to bring out a caution. A handful of trucks pit but Nemecheck stayed out and led the way on the restart on Lap 85.

As the field exited Turn 4 after the restart, Tate Fogleman spun and wrecked and collected White and Kris Wright to bring out the fifth caution of the race.

Nemechek continued to lead the way when the race returned to green on Lap 90.

Rhodes, with help from Eckes, powered to the lead shortly after the restart.

With five laps remaining, Eckes took the lead away from Rhodes as Ankrum moved into second.

As the field took the white flag to single one lap remaining, Nemechek got into the back of Ankrum, triggering a massive 19 truck wreck that sent the race into a two-lap overtime.

When the race returned to green in overtime, Eckes led the way followed by Zane Smith, Rhodes and Kligerman.

Nemechek grabbed the lead with two laps remaining and held on to complete a sweep of the first two stage victories.

Following the break between Stages 1 and 2, the lead-lap trucks all elected to pit with Nemechek the first off pit road thanks to a fuel-only pit stop.

On the restart on Lap 27, Nemechek was followed by Friesen, Chandler Smith, Majeski and Gray.

Derek Kraus gave Friesen a shove into the lead on Lap 30 as Majeski moved into second.

Majeski returned to the top spot on Lap 32 as Kraus moved into second and Friesen dropped to third.

Ankrum powered into the lead for the first time on Lap 36. Nemechek went to the high groove and reclaimed the lead on Lap 38.

Nemechek passed Majeski with one lap remaining and held on to take the Stage 1 victory.

Majeski started on the pole and led the first 18 laps until Nemechek made his way around to take the lead for the first time.