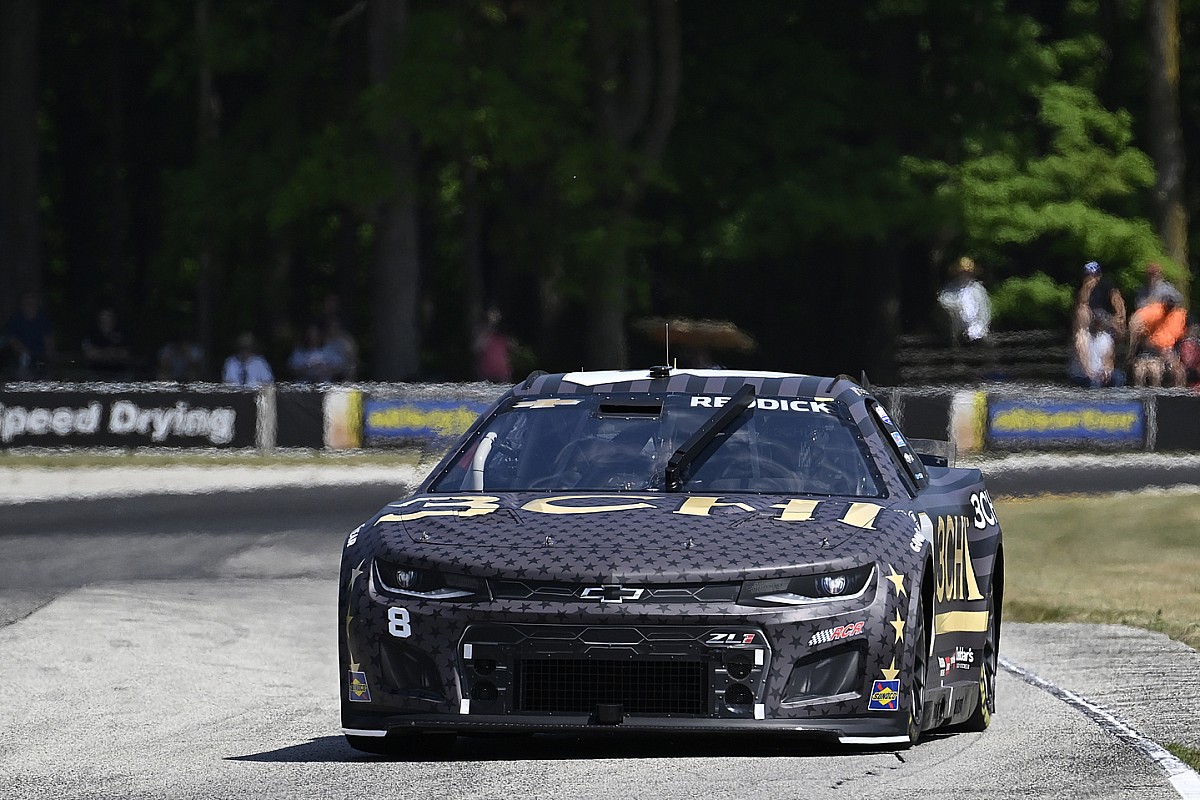 Following a final round of green-flag pit stops, Reddick passed Elliott for position on the track and inherited the lead for the first and only time on Lap 47 of 62.

He then spent the last 16 laps masterfully matching Elliott move for move, finally pulled away and took the victory by 3.304 seconds.

Reddick’s first career win comes in his 92nd start and after many close calls while at Richard Childress Racing.

Reddick becomes the fifth first-time winner this season and the third to do so on a road course (joining Ross Chastain and Daniel Suarez).

Reddick’s victory is also the first for the No. 8 car in the Cup Series since Dale Earnhardt Jr. won at Richmond, Va., for Dale Earnhardt Inc. in 2006.

“I definitely knew he was fast,” Reddick said of Elliott, who led the most laps in the race (36). “We could stay with him on the long run which told me if we cycled through that last pit sequence, it’d be close. If I could get around him, I’d have a great shot.

“We didn’t quite get around him (at first) but we were within reach. Thankfully, just waited for the right opportunity and waited to take advantage of it in Turn 6.

“I thought he was going to run me back down. I started to make some mistakes. I started to take care of the brakes, turns out I didn’t need to. We were in good shape there. Wow – what a day.”

Kyle Larson ended up third, Chastain was fourth and Suarez rounded out the top-five.

During the break between Stages 2 and 3, those drivers who did not pit prior to the break did so, with Kurt Busch first off pit road.

William Byron (pitting on closed pit road), Todd Gilliland (too fast on pit road), Brad Keselowski (drove through too many pit boxes) and Kyle Busch (crew member over the wall too soon) all had to restart from the rear of the field.

Once again, Elliott inherited the lead and led the way on the restart on Lap 33. He was followed by Reddick and Larson.

On Lap 35, Bubba Wallace went off-course and into the gravel in Turn 1 but returned to the track and was able to continue.

Larson nudged Chastain briefly off-track on Lap 37 but was able to get back on course after losing the position.

Keselowski was forced to pit under green on Lap 40 with a flat left-rear tire he picked up after hitting the wall in the area of Turn 5. He returned to the track in 33rd.

With 21 laps to go, Martin Truex Jr. and Kyle Busch became the first to make their final green-flag pit stops for new tires and fuel to make it to the finish. Busch, however, was penalized for speeding on pit road and had to serve a pass-through penalty.

Elliott, Reddick, Larson and several others pit on Lap 44. On Lap 46, Reddick got around Elliott in Turn 5 for what essentially would be the race lead once the green-flag stops finished.

Once the cycle of stops was completed on Lap 47, Reddick held a 1.3-second lead over Elliott as Larson ran third and Chastain fourth.

With 10 laps remaining, Reddick’s lead over Elliott had dropped to under a second.

Reddick was able to push his lead over Elliott back to 1.2 seconds with five laps to go in the race.

Austin Dillon got off-track and suffered a flat tire with two laps to go but pulled off the track which prevented a caution.

Electing not to pit before the break, Ryan Blaney held off Joey Hand to take the Stage 2 win.

During the break between Stages 1 and 2, those cars who had not pit prior to the end of Stage 1 did so, and Elliott inherited the lead. Denny Hamlin had to start from the rear after driving through too many pit boxes.

The race resumed on Lap 18 with Elliott out front followed by Larson and Reddick.

With 10 laps remaining in the stage, Elliott maintained about a 1-second lead over Larson as Reddick ran third.

On Lap 25, Joey Logano got into Wallace in Turn 5 which sent both cars spinning. Both were able to continue without need of a caution.

With six laps left in the stage, Reddick went to the inside of Larson and cleared him to move into the second position.

With three laps remaining, once again several lead-lap cars elected to pit prior to the end of the stage.

Another group – including Elliott – came down with two laps to go, which turned the lead over to Blaney.

Briscoe, who inherited the lead after Elliott was among those who pit, easily held off Cindric to take the Stage 1 win.

Elliott started on the pole and after a brief side-by-side battle with Briscoe, Elliott cleared him to lead Lap 1.

On Lap 5, Kyle Busch and Aric Almirola both spun in Turn 5 but both were able to continue on without issue.

“No grip. No turn. No drive. No stop. No nothing,” Busch said over his team radio.

With 10 laps remaining in the stage, Elliott had expanded his lead over Briscoe to 1.8 seconds as Larson ran third.

On Lap 11, Loris Hezemans took his No. 27 to the garage after complaining of a loss of fuel pressure.

With three laps to go in the stage, numerous lead-lap cars – including Elliott – elected to pit before the end of the stage, which turned the lead over to Briscoe.

Hamlin drove through too many pit boxes during his stop and had to restart from the rear of the field at the stage break.

Allmendinger had to pit a second time for a loose wheel.

Kyle Busch had to change engines after qualifying and had to start the race from the rear of the field. Hezemans also started from the rear for unapproved adjustments on his No. 27.