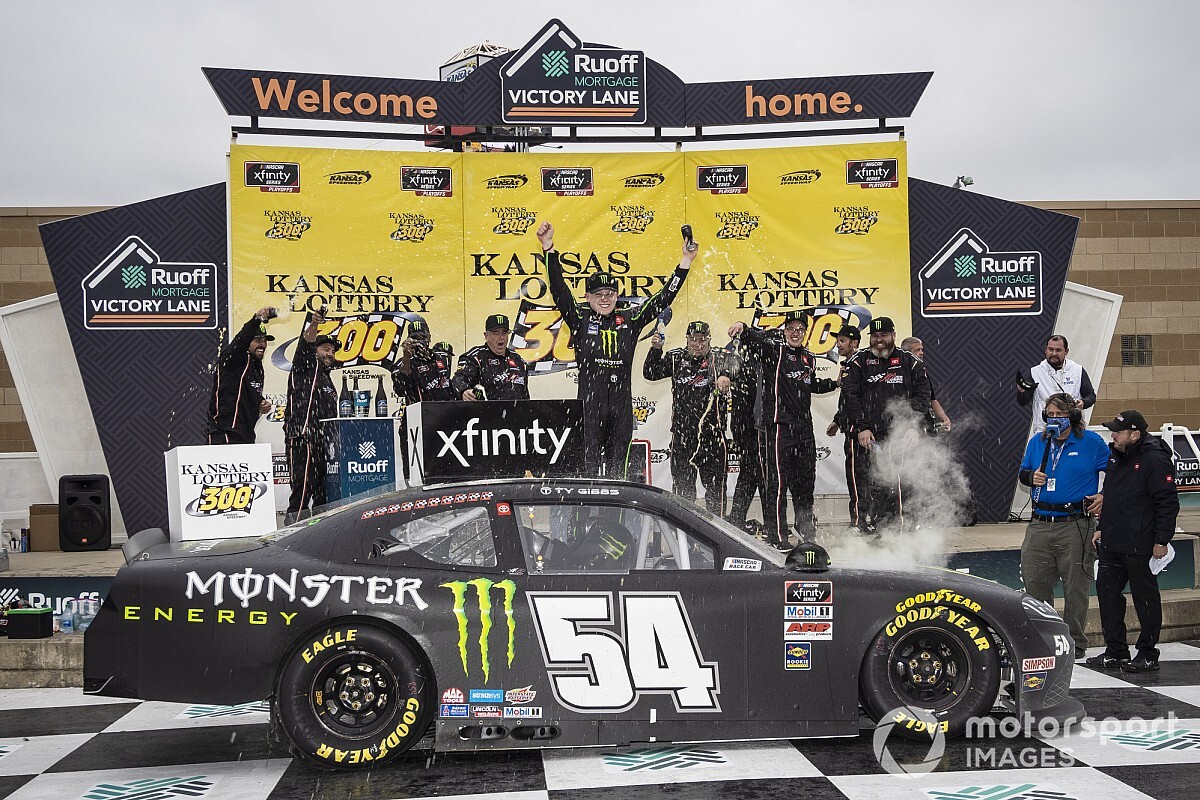 Gibbs, the 19-year-old grandson of NFL and NASCAR Hall of Famer Joe Gibbs, powered by reigning series champion Austin Cindric with 10 of 200 laps remaining and held on for his fourth win of the 2021 season.

Gibbs has been running a partial series schedule this season while competing fulltime in the ARCA Menards Series. He will clinch the 2021 ARCA championship by taking the green flag in Saturday night’s race.

“Man, what a day. This is awesome,” Gibbs said. “I just felt (Cindric) got a little bit free and slowed down in (Turns) 3 and 4, and I just tried to get to his left-rear, side-draft him and get away from him.

“Luckily, I pulled out with it. I got loose over there a couple times but I was just trying to give it my all. To have four wins in the Xfinity Series this year is just unbelievable.”

As has almost become commonplace in this year, several playoff drivers were involved in wrecks during the race, including Noah Gragson, Harrison Burton, Brandon Jones and Daniel Hemric.

With one race remaining in the semifinal round of the playoffs, no drivers are yet locked into the Championship 4 and with a non-playoff driver winning for the second consecutive week, at least three of the four drivers competing for the series title will be based on points.

The four drivers currently in danger of being eliminated from the title race heading into next weekend’s race at Martinsville, Va., are Haley, Gragson, Jones and Harrison Burton.

Following the break between Stages 2 and 3, the lead-lap cars all pit with Gibbs the first off pit road. Gibbs, however, was penalized for speeding on pit road and had to restart the race from the rear of the field.

When the race returned to green on Lap 97, Daniel Hemric led the way, followed by Cindric and Gragson.

Coming off Turn 2 on the restart, Hemric appeared to slide up in front of Gragson to trigger a wreck in which they both received damage and brought out a caution. Allmendinger was also forced to take evasive action.

The race resumed on Lap 103 with Hemric out front, followed by Harrison Burton and Myatt Snider.

Joe Graf Jr. spun off Turn 2 on Lap 104 to bring out the sixth caution of the race. Hemric pit again under this caution for additional repairs to his car.

The race returned to green on Lap 108 with Cindric still in the lead.

With 75 laps remaining in the race, Cindric held about a second lead over Harrison Burton as Gibbs had worked his way back up to third.

Mason Massey wrecked in Turn 2 on Lap 136 to bring out a caution as Cindric was trying desperately to hold off Harrison Burton.

The lead-lap cars all pit with Cindric the first off pit road. On the restart on Lap 141, Cindric was followed by Gibbs, Harrison Burton and Gragson.

Gibbs quickly grabbed the lead on the restart only to see Cindric get back around him to retake the top spot on Lap 143.

With 50 laps to go, Cindric had opened up a 1.1-second lead over Gibbs with Justin Allgaier in third.

On Lap 155, NASCAR put out a caution for a tire carcass that ended up on the frontstretch. Several lead-lap cars pit with Jones the first off pit road thanks to a two-tire stop while Cindric was first off with four new tires.

Gragson was among those who stayed out and inherited the lead. He led the way on the restart on Lap 160 and was followed by Allmendinger and Hemric. Jones lined up ninth and Cindric 10th.

Shortly after the restart, Jones spun off Turn 2 to bring out the ninth caution of the race. Gragson remained in the lead when the race returned to green on Lap 164. Cindric restarted seventh.

By Lap 165, Cindric had moved up to second. One lap later, he powered past Gragson on his four new tires to reclaim the lead.

On Lap 179, while racing three-wide, Mayer appeared to clip the rear of Harrison Burton’s No. 20 Toyota, which shot up the track and collected Gragson in a hard wreck and brought out the 10th caution of the race.

Several lead-lap cars that still had a set of new tires left elected to pit but Cindric remained on the track and in the lead when the race resumed on Lap 185. Allgaier, the first off pit road with new tires, lined up 10th.

Allmendinger, on new tires, worked his way to fourth with 14 laps to go. He moved into third one lap later.

With 10 laps to go, Gibbs powered around Cindric to retake the lead.

Cindric dominated, leading every green flag lap, on his way to the Stage 2 win over Gibbs.

Hemric was third, Gragson fourth and Snider rounded out the top-five.

Following the break between Stages 1 and 2, all the lead-lap cars pit with Cindric the first off pit road. Allmendinger had a slow stop and came off pit road eighth.

On the restart on Lap 52, Cindric led the way followed by Gibbs and Hemric.

With 25 laps remaining in the second stage, Cindric’s lead over Gibbs had grown to about a second with Gragson in third.

With 10 to go, Cindric maintained a small advantage over Gibbs as Hemric moved back into third.

Allmendinger held off a determined Hemric to take the Stage 1 win, his 11th of the 2021 season.

Cindric was third, Gibbs fourth and Allgaier rounded out the top-five.

Hemric started on the pole and led the first nine laps until Cindric went to the outside of Hemric off Turn 2 on Lap 10 to grab the top spot.

NASCAR issued a competition caution on Lap 21 to allow teams to check tire wear. None of the lead-lap cars pit and Cindric remained in the lead when race returned to green on Lap 26.

On Lap 29, Jade Buford crashed hard on the frontstretch after contact with Dylan Lupton to bring out the caution. Once again the leaders remained on the track with Cindric still out front on the restart on Lap 38.

Allmendinger used a three-wide move after the restart to move into the lead.

With five laps remaining in the stage, Allmendinger held a small advantage over Hemric with Cindric in third.