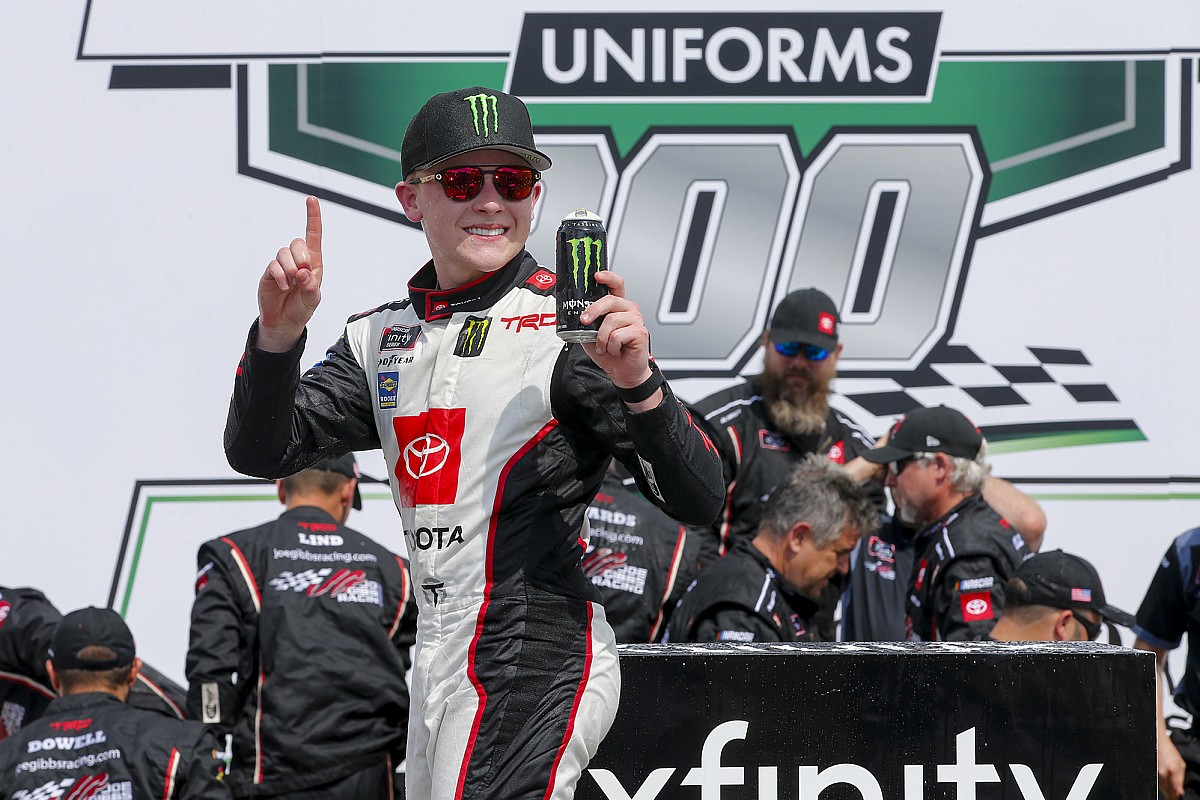 Gibbs spun off the exit of Turn 4 and slid through the frontstretch on the final lap of Stage 2 which relegated him to the rear of the field to start the final stage.

By Lap 151 of 200, Gibbs had moved up to third and following a tight battle with Chase Briscoe, Gibbs grabbed the lead on Lap 181. Briscoe spun out during the incident after getting aero-loose.

Gibbs then held off a furious challenge from reigning series champion Austin Cindric following a restart with seven laps to go to win the Alsco 300 at Charlotte Motor Speedway.

Gibbs, 18, has already won twice in the Xfinity Series this season and three times in the ARCA Menard Series.

“It feels really good. First off, I want to say sorry for the No. 99 team and Chase and his crew. I didn’t hit him but I definitely helped him out with him getting loose and that wasn’t my intention,” Gibbs said.

“I was definitely frustrated with myself, I wrecked myself and didn’t look good today. I’m still learning how the air works and I take full responsibility for the mistakes I made today.

About his season, Gibbs said, “It’s definitely been a lot. I’m learning how life goes at the same time. I really like this racing deal and I want to keep doing it.”

Following the break between Stages 2 and 3, the lead-lap cars all pit with Daniel Hemric again the first off pit road.

The race returned to green on Lap 98, Hemric was followed by Noah Gragson, Cindric, Harrison Burton and A.J. Allmendinger.

Cindric moved into the runner-up position shortly after the restart.

On Lap 99, Matt Mills spun on the backstretch and hit the wall to bring out a caution. The leaders remained on the track and Hemric led the way when the race returned to green on Lap 104.

On Lap 115, Briscoe went to the inside of Hemric off Turn 2 and came away in Turn 3 with the lead for the first time in the race.

Jeb Burton spun off Turn 4 and into the entrance of pit road on Lap 120 which brought out the sixth caution of the race.

All the lead-lap cars elected to pit and Briscoe was the first off pit road. Not only did Hemric have a slow stop, but he was also penalized by NASCAR for equipment interference during his pit stop and had to restart from the rear of the field.

On the restart on Lap 125, Briscoe led the way followed by Cindric and Harrison Burton. Hemric lined up 27th.

Allmendinger was forced to pit under green on Lap 128 for what he believed to be a brake issue. He eventually had to take his car to the garage.

By Lap 135, Hemric had broken back into the top-10 as Briscoe continued to lead the way.

Jeffrey Earnhardt hit the wall and debris from the incident landed on the frontstretch forcing a caution. All the lead-lap cars pit with Ryan Sieg the first off pit road thanks to a fuel-only stop.

When the race returned to green on Lap 151, Sieg was followed by Briscoe, Gibbs, Cindric and Harrison Burton. Hemric was back to seventh.

As the field entered Turn 2 after the restart, Sieg broke loose, appeared he was going to save it, but eventually drifted up the track and was T-boned by Josh Berry. Brett Moffitt also suffered extensive damage in the incident.

When the race returned to green on Lap 160, Briscoe was out front followed by Gibbs and Harrison Burton.

With 30 laps remaining, Briscoe maintained about a half-second lead over Gibbs and Harrison Burton ran third.

On Lap 181, Gibbs got around Briscoe to grab the lead and Briscoe got loose and spun on the backstretch to bring out a caution on Lap 182.

Most of the lead-lap cars remained on the track. On the restart on Lap 187, Gibbs led the way followed by Harrison Burton, Cindric and Justin Haley and Gragson.

The race returned to green on Lap 194 with Gibbs in command and followed by Cindric, Harrison Burton and Reddick.

Hemric cruised to victory in Stage 2, holding Allmendinger at bay and collecting his fifth stage win of the year.

Just after Hemric took the checkered flag, Gibbs spun off Turn 4 and spun through the frontstretch turf.

Following the break between Stages 1 and 2, all the lead-lap cars pit with Hemric the first off pit road. Tyler Reddick was penalized for speeding on pit road during his stop and had to restart the race from the rear of the field.

When the race returned to green on Lap 53, Hemric was followed by Gibbs and Allmendinger.

Hemric’s lead over Allmendinger remained at 1.3-seconds with 10 laps to go.

Hemric held off a spirited challenge from Allmendinger to take the Stage 1 win, his fourth stage win of the 2021 season.

Gibbs was third, Cindric fourth and Jeb Burton rounded out the top-five.

Herbst started on the pole and remained out front until Hemric went to his inside off Turn 4 and grabbed the lead on the start of Lap 8.

On Lap 21, NASCAR displayed a competition caution to allow teams to check for tire wear. Most of the lead-lap cars remained on the track.

On the restart on Lap 26, Hemric continued to lead the way followed by Herbst and Briscoe.

Grant Enfinger got hit by Chad Finchum which turned Enfinger’s No. 26 Toyota into the frontstretch wall and brought out a caution.

When the race returned to green on Lap 32, Hemric led the way followed by Cindric and Herbst.

With 10 laps remaining in the first stage, Hemric maintained a small but steady lead over Allmendinger with Gibbs in third.