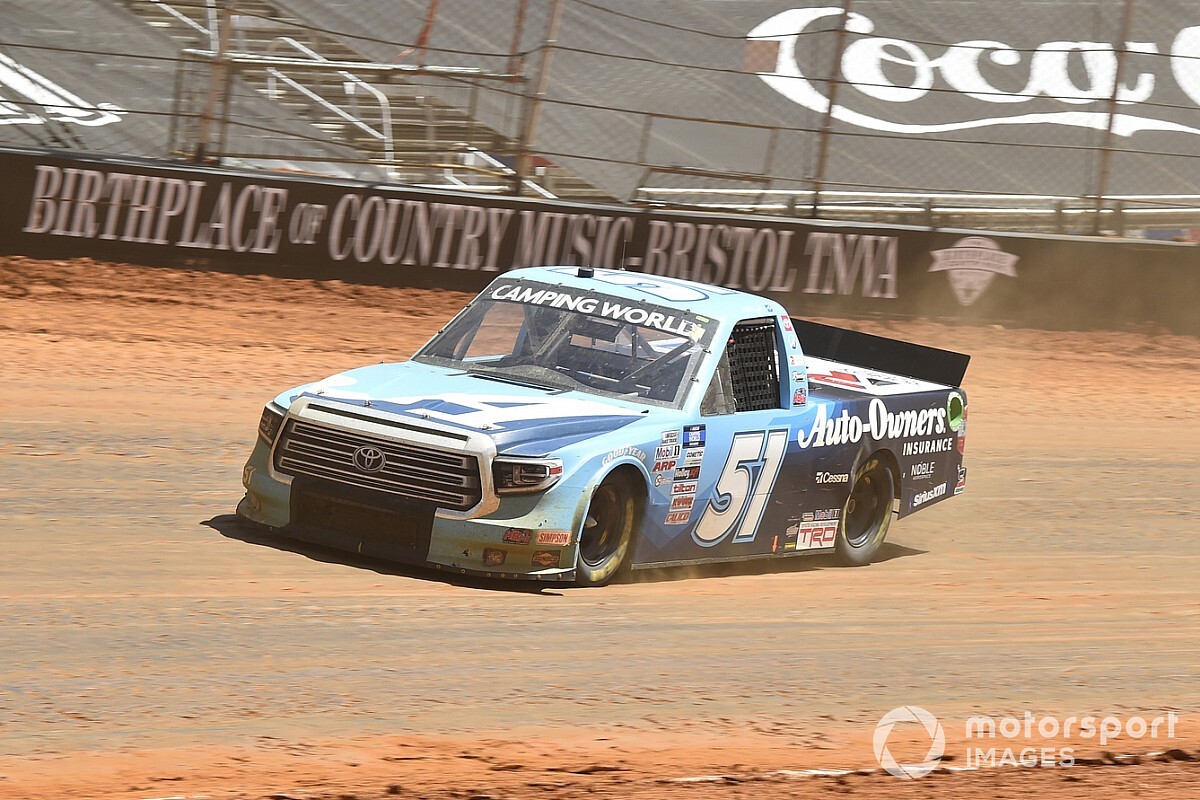 Truex easily got away from Ben Rhodes and Raphael Lessard on a restart with 11 of 150 laps remaining and cruised to a 1.149-second win over Rhodes on the reconfigured Bristol (Tenn.) Motor Speedway. He led a race-high 105 laps, including the final 57.

Truex was entered in the event, driving the No. 51 Toyota for Kyle Busch Motorsports to get experience for the Cup Series’ first race on dirt in more than 50 years.

The win is Truex’s first win in three Truck starts and he becomes the 36th driver to win at least one race in each of NASCAR’s three national series – Cup, Xfinity and Trucks.

“It’s unbelievable, really. I guess they had to put dirt on Bristol to get me back to Victory Lane here,” Truex said. “It’s been a long time. Man, that was a blast. I’m still really surprised.

“I wanted to run this race because I wanted to get more experience for the Cup car and we got out there in practice and it felt really good. I was having a lot of fun. So, I just kept trying to work with the guys and telling them what I needed.

“That was a blast. I kept thinking, ‘What’s going to happen next? Am I going to get a flat tire or something stupid?’ This No. 51 is pretty much used to being in Victory Lane, so a lot of pressure there.”

Following the break between Stages 2 and 3, Enfinger and Chase Purdy remained on the track while the rest of the field took advantage of the controlled pit stops.

The race returned to green on Lap 93 with Enfinger out front followed by Purdy, Truex and Rhodes.

On Lap 94, Truex battled through Enfinger and Rhodes to return to the race lead.

Mike Marlar fell off the pace on Lap 99 with a flat tire but remained high on the track. Kyle Larson plowed into the back of Marlar in an incident that also collected Brett Moffitt and Danny Bohn.

The race was red flagged for nearly six minutes to clean the track of debris. When the race resumed on Lap 108, Truex led the way.

Chandler Smith spun off Turn 2 on Lap 119, came down the track and piled into the No. 13 Toyota of Johnny Sauter to bring out the 11th caution of the race.

Truex continued to lead when the race returned to green on Lap 126.

Andrew Gordon spun off Turn 4 on Lap 132 and backed into the safety barrels covering the end of the wall near the entrance to pit road. Truex continued to pace the field when the race returned to green on Lap 139.

Truex held off Rhodes on a six-lap dash to the finish to earn the Stage 2 win and complete a sweep of both stage victories.

Hill was third, Briscoe was fourth and Sheldon Creed rounded out the top-five.

Following the break between Stages 1 and 2, most teams took part in the controlled pit stops but Stewart Friesen and John Hunter Nemechek remained on the track and led the way when the race returned to green on Lap 43.

Zane Smith had to restart from the rear of the field as his team took on fuel before changing tires. Sauter went to the rear for working beyond the 3-minute clock.

Truex got around Friesen to reclaim the lead on Lap 43.

On Lap 49, Nemechek went around in Turns 1 and 2 and several seconds later, Derek Kraus slammed into him and Timothy Peters got caught up in the incident as well.

“Matt (Crafton) just flat ran over me. That one will be in the memory bank,” Nemechek said. “The 19 (Kraus), I guess he and his spotter both need a pair of glasses. I’ll have them ready for them at Richmond.”

The race was placed under a red flag for just over seven minutes to clean fluid off the track surface. The race returned to green on Lap 58 with Truex still in command.

Jennifer Jo Cobb spun off Turn 2 on Lap 63 to bring out another caution and did some damage to her No. 10 Chevrolet. The race resumed on Lap 69 with Truex still out front.

Norm Benning stopped on the track in Turn 1 on Lap 70 and immediately continued on after the caution was displayed. NASCAR held Benning in his pit stall for intentionally causing a caution. The race returned to green on Lap 76.

Rhodes quickly powered to the lead as he, Truex and Creed raced for the lead. Truex got back around Rhodes to reclaim the lead on Lap 78.

Myatt Snider spun off Turn 4 on Lap 80 to bring out a caution. The race returned to green on Lap 85.

Truex got around the outside of Creed exiting Turn 4 and took the Stage 1 win in a one-lap dash to the finish.

Zane Smith finished third, Friesen was fourth and Nemechek rounded out the top-five.

Nemechek started on the pole but Creed quickly moved into the lead on Lap 2 and began pulling away.

On Lap 13, NASCAR displayed the first caution of the race after Tanner Gray spun around between Turns 3 and 4.

The race returned to green on Lap 18 with Creed out front followed by Friesen and Hill.

With 20 laps to go in the first stage, Creed remained out front but was having to fend off Friesen, Hill and Matt Crafton for the lead.

Carson Hocevar spun on the frontstretch on Lap 27 to bring out another caution. The race resumed on Lap 32.

Chandler Smith spun in Turns 1 and 2 and got hit by Tyler Ankrum on Lap 35 to bring out another caution. The race returned to green with one lap remaining in the stage.