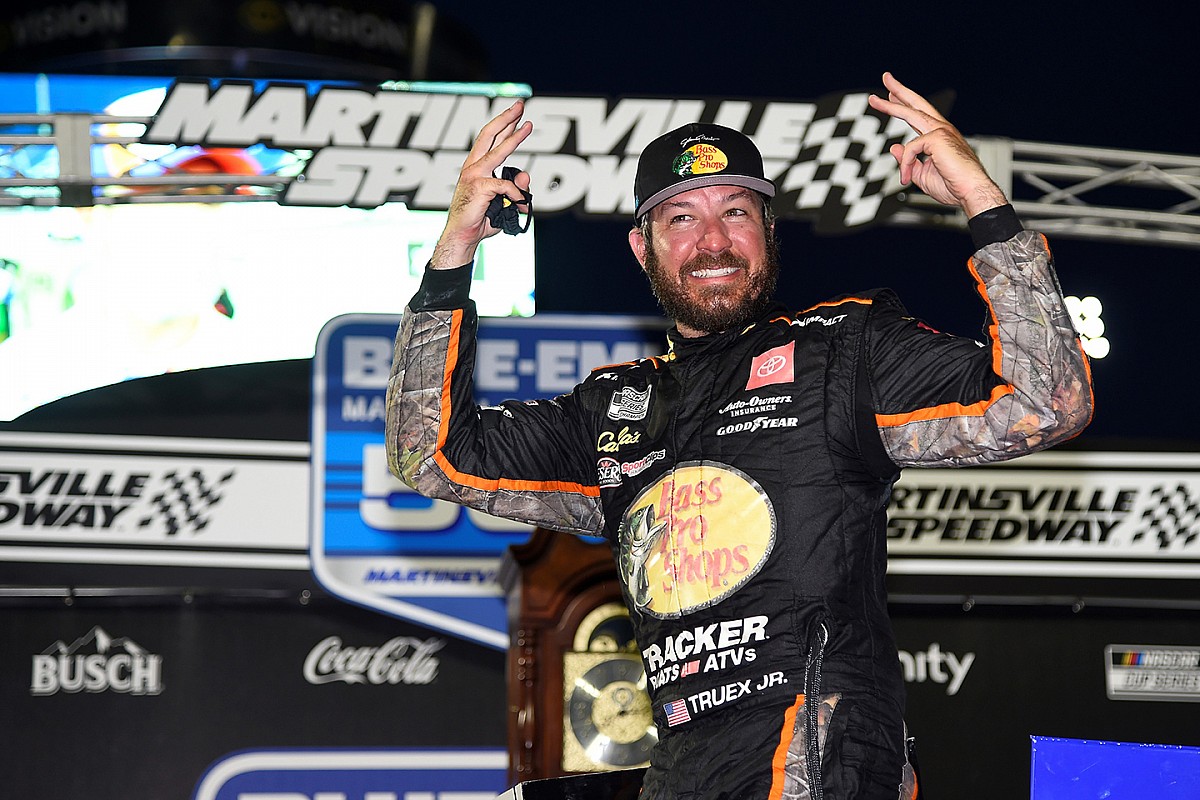 Only 42 of 500 laps were completed Saturday night before the remainder of the Cup race was postponed until Sunday afternoon.

But a late-race red-flag for a multi-car wreck pushed the race into the night and it was then that Truex’s No. 19 Toyota came to life.

Truex ran down his Joe Gibbs Racing teammate Denny Hamlin – who dominated much of the race – and passed him with 15 to go. He then held off late charge from Chase Elliott to secure his second win of the 2021 season.

“It was pretty incredible there at the end. James (Small, crew chief) and the guys really hung with me all day. We never could get quite where we wanted it,” Truex said. “It started getting dark and she came to life. I can’t believe we won here again after not having the dominate car here today for sure. That was a lot of fun there racing at the end with Denny. We raced clean and we were able to come out on top.

“We try to race hard, race clean. He was making it difficult on me. I was loose coming off of the corners and his car got tight, so we kind of had opposite things going on and it made it difficult to pass, but we played nice and Coach (Joe Gibbs, team owner) will be happy. It will be a cordial meeting tomorrow.”

Asked about a third victory at Martinsville now, Truex said: “This is unbelievable. This place has become a playground for us, I guess. We didn’t have the best car all day, but we just kept working on it and never quit on it. This (car) came on at the end and that’s when it counts.

“There’s something about when the lights come on here, we’re really good. So, that was cool.”

The win is the 29th of his career and three of his four most recent Cup wins have come at Martinsville.

Hamlin, who led 276 laps, ended up third, William Byron was fourth and Kyle Larson rounded out the top-five.

Following the break between Stages 2 and 3, several lead-lap cars pit but Hamlin stayed out and inherited the lead. Ryan Blaney was first off pit road among those who pit.

On the restart on Lap 270, Hamlin led the way followed by Brad Keselowski, Byron, Reddick and Kurt Busch.

On Lap 277, Justin Haley spun in Turn 3 and 4 after cutting a tire to produce the seventh caution of the race. Only a handful of cars elected to pit.

Hamlin remained in the lead when the race restarted on Lap 283.

Cody Ware spun in Turn 2 on Lap 289 to bring out another caution. Most of the lead-lap cars decided to pit but Wallace remained on the track and inherited the lead. Hamlin was the first off pit road among those who pit.

Austin Dillon had to serve a one-lap penalty for pitting outside his pit box during the stops.

On the restart on Lap 297, Bubba Wallace was followed by Ryan Newman, Daniel Suarez, Ricky Stenhouse Jr. and Chris Buescher.

Byron, on fresh tires, moved into second behind Wallace on Lap 311.

Byron finally was able to work his way around Wallace on Lap 315 to take the lead for the first time in the race.

Kyle Busch spun around in Turn 2 on Lap 321 to bring out a caution. The lead-lap cars all pit with Hamlin the first off pit road.

On the restart on Lap 328, Hamlin was followed by Byron, Newman, Alex Bowman and Logano.

Anthony Alfredo spun in Turn 2 on Lap 330 to cause the 10th caution of the race. Hamlin continued to lead the way on the restart on Lap 337.

Keselowski spun in Turn 2 after contact with Suarez to bring out another caution. Cole Custer also got a piece of that incident.

The leaders remained on the track and Hamlin led the way on the restart on Lap 348 followed by Bowman and Byron.

One lap later, Newman spun in Turn 2 after several cars made contact to bring out the 12th caution. The leaders stayed on the track and Hamlin remained the leader on the restart on Lap 356.

Bowman was forced to pit under green with 134 laps to go for what he believed to be a loose wheel. He had been running as high as second.

Erik Jones spun and wrecked in Turn 2 on Lap 371 after contact from Ross Chastain and Keselowski.

On the restart on Lap 378, Bell was followed by Chastain, Suarez, Hamlin and Logano.

Hamlin powered around Bell for the lead on Lap 383.

On Lap 386, Kyle Busch and Chris Buescher banged fenders off Turn 2 which triggered a multi-car crash that temporarily blocked the backstretch and brought out a red flag.

Following a nearly 22-minute red flag to clean the track of debris, the race returned to caution. A handful of cars elected to pit.

On the restart on Lap 397, Hamlin led the way followed by Blaney, Logano, Elliott and Truex.

With 50 laps to go in the race, Hamlin maintained a small but steady lead over Blaney. Truex ran third, Elliott fourth and Larson ran fifth.

On Lap 452, Chase Briscoe spun and wrecked in Turn 3 which brought out the 15th caution of the race. All the lead-lap cars pit with Truex the first off pit road. Blaney was penalized for taking equipment out of the pit box and had to restart from the rear of the field.

When the race returned to green on Lap 459, Truex was followed by Hamlin, Larson, Elliott and Bell.

Shortly after the restart, Hamlin went to the outside of Truex and reclaimed the lead.

With 30 laps remaining, Hamlin held a small advantage over Truex while Elliott had moved into third.

With 15 to go, Truex went to the inside and got around Hamlin to retake the lead. Elliott and Hamlin remained in the hunt, however.

Blaney held off Hamlin in a two-lap shootout to the finish and completed a sweep of the Stage 1 and 2 wins.

Truex was third, Bowman fourth and Elliott rounded out the top-five.

Following the break between Stages 1 and 2, all the lead-lap car pit with Blaney the first off pit road.

When the race returned to green on Lap 141, Blaney was followed by Hamlin, Truex and Larson.

Hamlin quickly got around Blaney on the restart to retake the lead.

On Lap 175, Blaney returned the favor and got back around Hamlin, using the inside lane to retake the lead.

With 60 laps remaining in the second stage, Blaney had built up a 1.5-second lead over Hamlin. Truex ran third, Bowman fourth and Larson fifth.

With 40 to go, Blaney had expanded his lead over Hamlin to more than 2 seconds.

On Lap 232, Bowman moved into third, behind Blaney and Hamlin as Truex dropped to fourth.

Ware appeared to blow a tire and wrecked in Turns 3 and 4 on Lap 241 to bring out a caution.

All the lead-lap cars elected to pit with Blaney once again the first off pit road. Logano was penalized for speeding on pit road during his stop and had to restart from the rear of the field.

The race returned to green on Lap 250 with Blaney out.

Newman and Matt DiBenedetto made contact on Lap 251 in Turns 1 and 2 to bring out another caution. The race returned to green on Lap 259 with Blaney still in command.

Blaney grabbed the lead shortly after the race restarted from its postponement and held off Hamlin to take the Stage 1 win, his second stage victory of the 2021 season.

Truex was third, Elliott was fourth and Larson rounded out the top-five.

Following a lengthy delay on Saturday night, NASCAR started the race although bad weather remained in the area.

Hamlin took an early lead from pole-sitter Logano and led the way until James Davison spun in Turn 4 on Lap 38, which brought out a caution. During the caution, the rain picked up and NASCAR ultimately postponed the remainder of the race following 42 completed laps.

The race returned to green on Lap 47 on Sunday afternoon with Hamlin out front followed by Blaney and Elliott.

On Lap 51, Kurt Busch spun off Turn 4 to bring out a caution after contact with Jones. The race returned to green on Lap 57 with Hamlin still out front.

On Lap 75, Blaney gave Hamlin a shove and got around him to take the lead for the first time in the race.

Suarez was forced to pit under green on Lap 84 after reporting a vibration and ended up having a loose right-front wheel.

With 30 laps remaining in the first stage, Blaney had built up a 1-second lead over Hamlin as Truex ran third and Elliott fourth.

Blaney’s lead over Hamlin ballooned to 1.8 seconds with 10 laps to go in the stage.