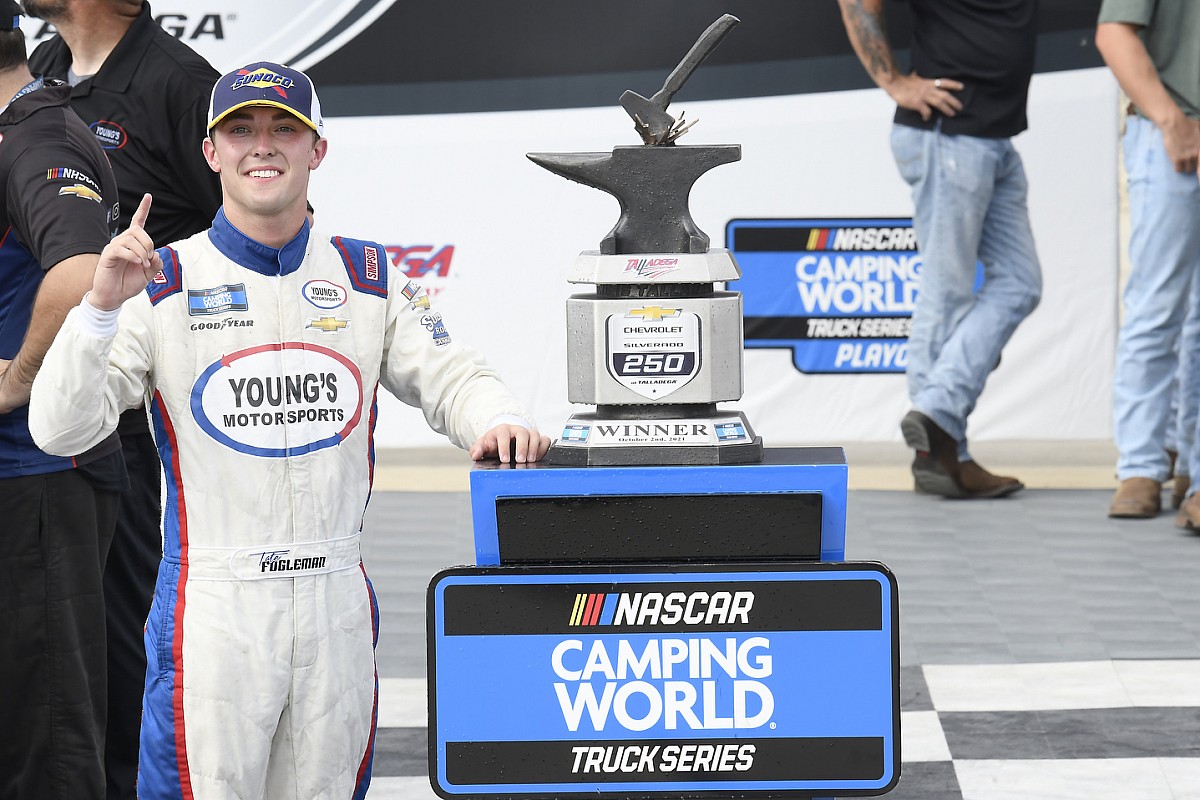 On the final lap of Saturday’s NASCAR Truck Series race at Talladega (Ala.) Superspeedway, Tate Fogleman spun then-leader John Hunter Nemechek and Tyler Hill plowed into Fogleman as both wrecked across the finish line.

Fogleman – who didn’t lead a lap the entire race – was declared the winner by a scant 0.052 seconds – his first career victory in 46 career starts.

Two weeks ago at Bristol, Tenn., A.J. Allmendinger and Austin Cindric wrecked across the finish line in the Xfinity Series race with Allmendinger coming out with the win.

“I knew I just had to push as hard as I could,” Fogleman said. “My truck had damage on the front-end so it wouldn’t really suck up. Without a push from behind I don’t think we would have got there.

“I got the push from behind and stayed aggressive. I knew nobody was going to give me any room. I did all I could pushing and luckily the seas parted and luckily we came away with the win.

“We’ve never finished a superspeedway race before so I really didn’t know what to do. I’ve tried laying back in other races and it never worked. So, we figured we’d stay aggressive, try to stay toward the front. When we missed the first two big wrecks I had a feeling things were going in the right direction.”

After two of three races in the semifinal round, Truck playoff drivers remain locked out of Victory Lane.

Heading to the last race to qualify for the Championship 4 on Oct. 30 at Martinsville, Va., Nemechek leads the playoff standings, followed by Ben Rhodes, Matt Crafton and Sheldon Creed.

Following the break between Stages 2 and 3, most of the lead-lap trucks pit with Austin Hill the first off pit road.

On the restart on Lap 48, Chase Purdy – who stayed out – led the way followed by Austin Hill, Gilliland and Tanner Gray.

Bret Holmes powered into the lead shortly after the restart.

Austin Hill got around Holmes on Lap 50 to take the lead for the first time in the race. Holmes returned to the lead on Lap 51.

On Lap 58, Gilliland gave Austin Hill a big shove which sent him for a spin and triggered a massive 21-truck accident that included numerous playoff contenders, including Zane Smith, Austin Hill and Chandler Smith.

NASCAR red-flagged the race for nearly 10 minutes to clean the track of debris. Several drivers topped off on fuel to try to make it to the end of the race.

The race returned to green on Lap 64 with Gilliland out front followed by Creed and Grant Enfinger.

With 30 laps to go, Gilliland led the way followed by Enfinger and Crafton.

Another massive wreck erupted on Lap 76 when Enfinger moved up the track and Creed hit him from behind. Also involved in the incident were Hailie Deegan, Clay Greenfield, Lawless Alan and Friesen.

On the restart on Lap 83, Gilliland led the way followed by Crafton, Rhodes, Creed and Nemechek.

With 10 laps to go, Gilliland remained out front as Rhodes moved to second and Purdy third.

Purdy powered into the lead on Lap 93 only to get turned by Gilliland to bring out a caution and send the race into a two-lap overtime.

To start overtime it was Gilliland, Rhodes, Nemechek and Holmes.

Creed outdueled Johnny Sauter on the final lap to take the Stage 2 win.

Zane Smith was third, Crafton was fourth and Austin Hill rounded out the top-five.

Following the break between Stages 1 and 2, all the lead-lap trucks pit with Nemechek the first off pit road.

On the restart on Lap 26, Nemechek was followed by Crafton, Rhodes and Creed.

Crafton moved into the lead on the restart only to see Nemechek grab it back on Lap 28.

On Lap 29, Bryan Dauzat wrecked off Turn 2 to bring out a caution. A handful of Trucks pit but Nemechek remained on the track and in the lead when the race resumed on Lap 34.

Crafton grabbed the lead on the restart only to lose it on Lap 36 to Creed following contact with Nemechek.

Nemechek crossed over Creed on Lap 38 to reclaim the lead but lost it to Sauter on Lap 39 as Nemechek got caught in the middle lane and dropped back.

Rhodes held off Austin Hill to take the Stage 1 win, his second stage victory of the 2021 season.

Crafton was third, Friesen fourth and Sauter rounded out the top-five.

Rhodes started on the pole and led the first two laps until Gilliland got around him to take the lead on Lap 3.

Rhodes reclaimed the lead on Lap 4.

With 10 laps remaining in the first stage, Rhodes remained barely ahead of Crafton with Austin hill in third.

Nemechek got a push into the lead on Lap 15 after he was nearly wrecked by contact from Sauter.

Rhodes snuck back in front on Lap 16.