Santino Ferrucci’s goal in NASCAR? “Take in every moment” 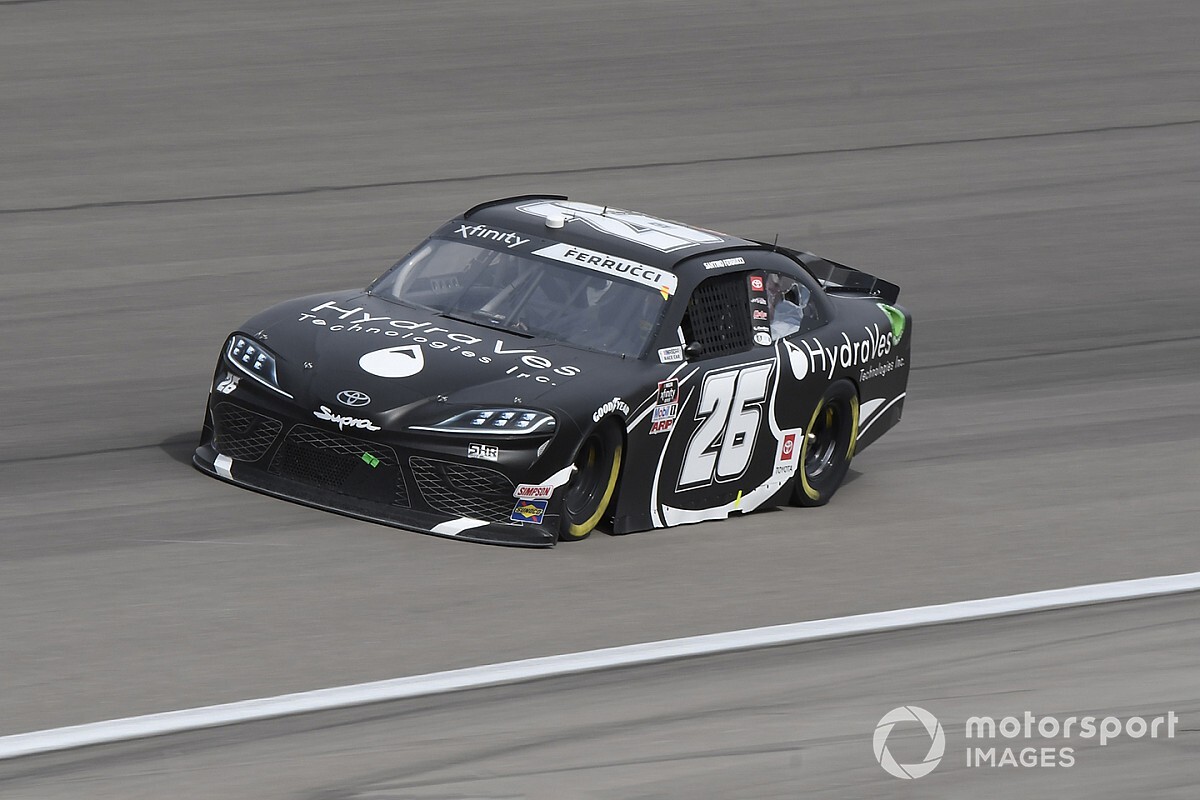 Ferrucci bounced back from a cut tire and wreck at Homestead-Miami Speedway last weekend in his Xfinity Series debut to charge to a 13th-place finish Saturday at Las Vegas Motor Speedway.

The finish is the second-best ever for Sam Hunt Racing since its debut in 2019. Saturday’s race is Ferrucci’s second of five consecutive scheduled in the No. 26 Toyota.

“Oh man, from when the green flag dropped, I felt really confident. We just got really free right off the get-go so I just tried to hang on to it in Stage 1,” he said. “In Stage 2, Andrew (Abbott, crew chief) took about six rounds of wedge out of our Supra and it lit it up.

“I was really happy with the balance the rest of the night. After that, I think it was one more turn of wedge and a small tire adjustment and dude we went racing. Just being able to race at the end there with Justin (Allgaier) – he’s a really good friend of mine – it was just so awesome.”

With no prior NASCAR experience, you might think Ferrucci would be frustrated trying to tackle a new form of racing without practice or qualifying sessions, but actually he relishes the challenge.

“I’m not going to lie – I kind of like it. It’s such an adrenaline rush to just show up and take the green flag,” he said. “I mean, it’s one of those things, it’s probably the first time ever and maybe the last time in my life that I’ll get to show up and do something completely new and go at it green.

“I am just trying to love and take in every moment. I think the crew is as well. It’s definitely not getting old.”

Although he’s only had two races from which to judge, Ferrucci said oval racing has just been “so much fun.”

“The fact you come through the field and you’re just racing everybody. It doesn’t matter if it’s a lead-lap car or 3-lap down car, it’s all just so close,” he said. “Even taking the air off people in the side-draft – that’s something I’m still trying to figure out how the heck that even works. That’s something that we just don’t have in (IndyCar).

“I’m just having so much fun. These cars are so much fun to drive. In IndyCar, you have to be so tense and so perfect every single lap, it’s so hard to take a breather and enjoy the moment. I can enjoy all 200 laps here. That’s a huge plus for me.”

Ferrucci’s team owner, Sam Hunt, said he’s trying to set realistic expectations for his driver but believes his passion and “wide-open” personality are hard to contain.

“He’s competitive. He’s a big personality but he really does care. He works for it and you know by the end of tonight, we’ll have a two-page brief on what he can do better, what the team can do better.

“I think he understands his opportunities are limited and he has to make the most of every race even if on paper he’s not ready. He’s wide-open. He’s wide-open behind the wheel and he’s a wide-open personality.”