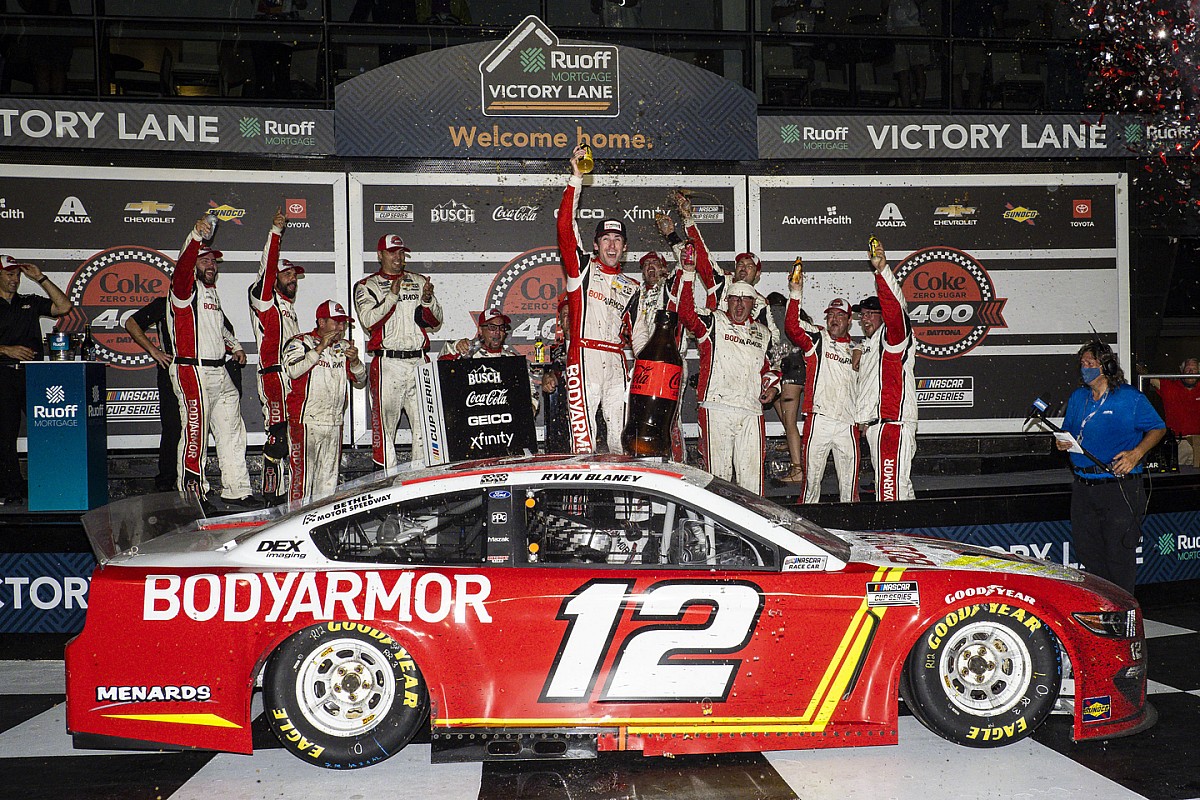 Chris Buescher led the way entering the two-lap overtime – one of six drivers in the top-10 running order still trying to make the playoffs in the regular season finale.

With one lap to go, Corey LaJoie gave Blaney a shove that allowed him to clear for the lead. A multi-car wreck erupted when Kurt Busch got into Daniel Suarez in Turn 3 to place the race under caution and secure Blaney’s victory.

“How about that? That was a lot of fun. Gosh, we just barely missed that wreck,” Blaney said. “Got to line up on the front row, got a good push by (LaJoie).

You never know how the end of these things is going to play out. Down the back (stretch), you don’t know what lane is getting a bigger run. I guess someone got tangled up over there. Hopefully everyone is okay.

“It’s so cool. Wwin at Daytona, everybody here. Thank you guys for coming. Really special. It’s been a fun two weeks.”

It’s the third win of the 2021 season for Blaney, who won last Sunday’s race at Michigan with a late-race push to the lead by Kyle Busch.

Tyler Reddick, with a damaged car, finished sixth and clinched the 16th and final spot in the playoff field.

Kyle Larson, who finished 21st after getting caught up in that last-lap wreck, still won the regular season title over Denny Hamlin by 18 points.

Buescher ended up second in the race, Bubba Wallace was third, Ryan Newman fourth and Ryan Preece completed the top-five.

The remainder of the top-10 were Reddick, Justin Haley, Alex Bowman, Chase Elliott and B.J. McLeod.

Following the break between Stages 2 and 3, all the lead-lap cars elected to pit with Byron the first off pit road.

When the race resumed on Lap 106, Byron was followed by Hamlin, Harvick and Wallace.

Hamlin quickly moved around Byron to take the lead after the restart.

Riding side-by-side with Logano, Ross Chastain led at the line on Laps 112 and 113 before Blaney got a shove to the front to lead Lap 114.

Chastain got a push past Blaney and into the lead on Lap 117.

A group of Ford drivers pit under green on Lap 123 to take on new tires and fuel to make it to the finish of the race.

With 30 laps to go, the Chevrolets and Toyotas still needed to make their final stops as Chastain led the way.

On Lap 140 before green-flag stops were completed, Garrett Smithley spun off Turn 4 with flat tire in an incident that also collected Joey Gase and Cody Ware to bring out a caution.

During the caution, the Toyotas and Chevrolets pit for their final stops and Dillon was penalized for speeding on pit road and had to restart from the rear of the field.

When the race returned to green on Lap 145, Logano led the way followed by Blaney, Almirola and Matt DiBenedetto. The first non-Ford driver in the lineup was Kyle Busch (ninth).

On Lap 146, Ricky Stenhouse Jr. appeared to get into the rear of Truex on the backstretch which triggered a large wreck which collected Reddick, Byron, Keselowski, Chase Briscoe, Landon Cassill, Anthony Alfredo and Suarez.

After a nearly 15-minute red flag to clean the track of debris, the race returned to yellow. Dillon pit to have the battery changed in his No. 3 Chevrolet.

When the race resumed on Lap 151, Logano still led the way followed by Blaney, Almirola, Buescher and Cole Custer.

On Lap 154, Buescher got a shove from Elliott which launched him to the lead. Elliott reclaimed the top spot on Lap 155.

Elliott got into DiBenedetto racing for the lead on Lap 157 which triggered a multi-car wreck which collected Hamlin, Bell, Custer, Kyle Busch and Keselowski.

The race went into a two-lap overtime with Buescher leading the way followed by Blaney, LaJoie, Dillon and Harvick.

Logano withstood a furious last-lap charge from Dillon and held on for the Stage 2 victory.

Byron was third, Reddick fourth and Larson completed the top-five.

Following the break between Stages 1 and 2, most of the lead-lap cars elected to pit with Kyle Busch the first off pit road. Logano had to start from the rear of the field for his pit crew throwing his fuel can during his pit stop.

On the restart on Lap 56, Kyle Busch was followed by Truex and Preece.

With a shove from LaJoie, Truex moved into the lead shortly after the restart.

On Lap 70, Truex got kicked out of the draft with debris on his grille and Bell moved up into the lead for the first time in the race.

With 25 laps remaining in the second stage, Bell maintained a small lead over Stenhouse followed by Kyle Busch and Dillon.

Just after Logano moved into the lead, Almirola and Bowman both spun off Turn 4 in an incident that also collected Alfredo to bring out a caution.

Several lead-lap cars pit during the caution but Logano remained on the track and in the lead as the race returned to green on Lap 82.

With 10 laps to go in the stage, Logano held a small advantage over Reddick with Stenhouse third and Kyle Busch fourth.

With six laps to go, Blaney led a group on the bottom lane up to the front and Logano moved down to block their advantage as he tried to cling to the lead.

Elliott held off Hamlin to hang on for the Stage 1 win at Daytona.

Kyle Busch finished third, Chastain was fourth and Truex rounded out the top-five.

Hamlin started on the pole but Byron cleared to the lead on Lap 1.

Harvick powered past Byron to grab the top spot on Lap 7. Byron quickly got it back on Lap 9.

Dillon powered to the lead for the first time on Lap 18 as Chastain was forced to make a green-flag pit stop to fix fender damage after a brush with the wall.

Shortly after Elliott made his way to the lead, NASCAR displayed a competition caution on Lap 22 to allow teams to check tire wear.

All the lead-lap cars pit for fuel with Elliott the first off pit road. On the restart on Lap 26, Elliott was followed by Custer, Logano and Kaz Grala.

With 10 laps remaining in the first stage, Elliott remained the leader but had a large piece of debris on his front grille, which could pose a problem. Logano ran second and Custer third.

On Lap 42, Logano moved into the lead as Elliott dropped back in a successful attempt to loosen the debris on his grille. Logano, however, also picked up some debris while in the lead.

Following a three-wide move, Elliott moved back to the lead on Lap 44.

McDowell, Alfredo, Larson, LaJoie, Joey Gase and Grala all had to start the race from the rear of the field.