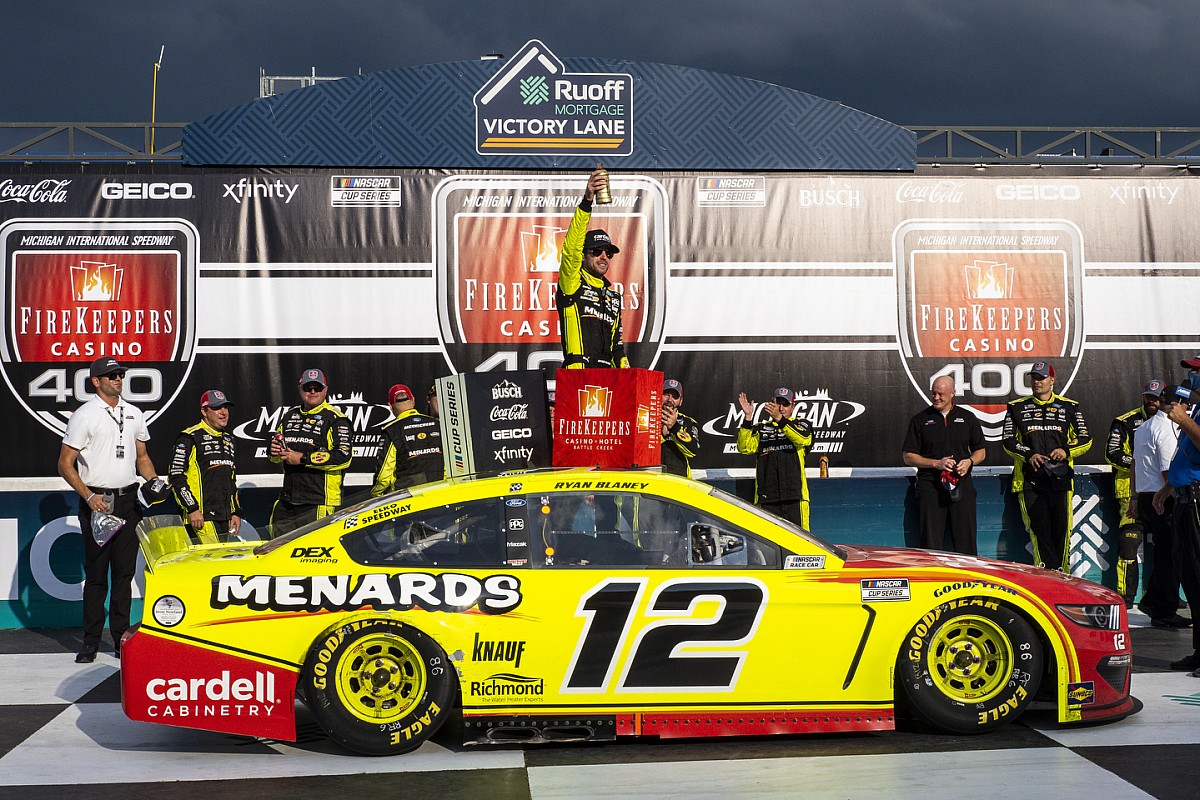 William Byron led the way on a restart with eight of 200 laps remaining of Sunday’s FireKeepers Casino 400 and Blaney was the first car to pick the inside lane on the restart.

When the race went green, Kyle Busch pulled up behind Blaney and gave him a huge push that shot up past Byron and into a big lead entering Turn 1.

Blaney then deftly held off repeated charges from Byron and Kyle Larson on the final two laps and claimed the victory Sunday by 0.077 seconds over Byron – the closest finish at the track since the advent of electronic scoring in NASCAR.

The win is Blaney’s second of the 2021 season and this is the first year Blaney has won more than one race since he joined the Cup series fulltime in 2016.

Blaney’s victory was the seventh-straight at the track by Ford Performance.

“We got a great push from (Kyle Busch) on the restart and were able to get clear there. Michigan, it’s a matter of running pretty much wide-open and playing the air game,” Blaney said. “I hate that we have to race that way but I got the run and it worked out for us.

“We weren’t great to start the day off but we kept working and working and got a lot better. This is so cool to get in Victory Lane for Ford. This is such a huge win for Ford and Penske. That was cool, man. I’m fired up.

“We had our problems early and we took our time to fix it and we got better and better. It really was push on the restart – that was the whole thing. I really appreciate Kyle for pushing me through there.”

Kevin Harvick’s 14th-place finish was good enough to lock him into the 16-driver playoff field. One spot in the field will be open entering next weekend’s regular season finale at Daytona International Speedway.

Following the break between Stages 2 and 3, Larson led the way when the final stage of the race returned to green on Lap 127.

With 50 laps to go, a threat of rain had developed in the area near the speedway as teams began contemplating their final round of green-flag pit stops.

Byron was among the first to make his final stop for new tires and fuel to make it to the finish on Lap 156.

On Lap 159, Hamlin reported that something hit his windshield and cracked and Larson appeared to run out fuel as he headed to pit road for his stop.

Hamlin gave up the lead to make his stop on Lap 165, which turned the lead over to Kyle Busch. Busch pit on Lap 167, handing the lead to Keselowski.

With 30 laps remaining, six cars – including Keselowski the leader – had yet to pit while Byron ran seventh, the first driver who had made his final stop of the race.

Byron finally cycled around to the lead on Lap 175. He was followed by Larson, Hamlin, Kurt Busch and Blaney.

On Lap 180, NASCAR displayed a caution as a light rain began falling on the track in Turn 1.

Several cars elected to pit but Byron remained on the track and in the lead when the race returned to green on Lap 187. He was followed by Larson, Hamlin, Kurt Busch and Blaney.

In Turns 3 and 4, cars went four-wide and Tyler Reddick made contact with Joey Logano which triggered a multi-car accident that brought out another caution.

Among the other cars collected were Christopher Bell, Truex, Ryan Newman and Michael McDowell.

The returned to green with eight laps to go and Byron still in the lead, followed by Hamlin and Larson.

Kyle Busch gave Blaney a huge shove on the restart to send him into the lead.

Just after Busch took the victory, Keselowski got into the right-rear of Austin Dillon and sent him up the track and into the wall, completing destroying the No. 3 Chevrolet.

Bell finished second in the stage, Larson was third, Elliott fourth and Hamlin rounded out the top-five.

Following the break between Stages 1 and 2, all lead-lap cars elected to pit with Larson the first off pit road. Logano was forced to make a second pit stop to check on loose lug nuts and had to restart the race from the rear of the field.

When the race returned to green on Lap 67, Larson was followed by Elliott, Daniel Suarez and Kyle Busch.

On Lap 80, Elliott got around Larson to reclaim the lead after patiently watching Larson and Dillon battle for the lead.

With 30 laps to go in the second stage, Elliott held a small lead over Larson with Dillon and Kyle Busch not far behind.

On Lap 102, Harvick was among the first of the lead-lap cars to pit under green for new tires and fuel to make it to the finish of the stage.

On Lap 111, Larson elected to pit and Elliott made the stop one lap later.

Once the cycle of green-flag stops was completed on Lap 116, Kyle Busch emerged as the leader thanks to a two-tire stop.

Elliott held on for the Stage 1 win as Larson nipped Dillon to claim the second spot.

Hamlin was fourth and Byron rounded out the top-five.

Larson started on the pole and led the first three laps until DiBenedetto got around him to lead Lap 3.

Larson quickly powered back around DiBenedetto to reclaim the lead on Lap 4.

On Lap 21, NASCAR displayed a competition caution to allow teams to check tire wear. All the lead-lap cars pit with Hamlin the first off pit road on a fuel-only stop.

When the race returned to green on Lap 26, Hamlin was followed by Larson, Kurt Busch and Elliott.

On Lap 27, Elliott got around Hamlin entering Turn 3 to grab the lead for the first time in the race.

On Lap 31, Joey Gase slammed into the Turn 2 wall to bring out a caution. A handful of cars pit but Elliott remained on the track and in the lead.

The race resumed on Lap 36 with Elliott out front followed by Hamlin, Larson and Kurt Busch.

With 10 laps remaining in the first stage, Elliott held just under a second lead over Austin Dillon as Hamlin ran third.