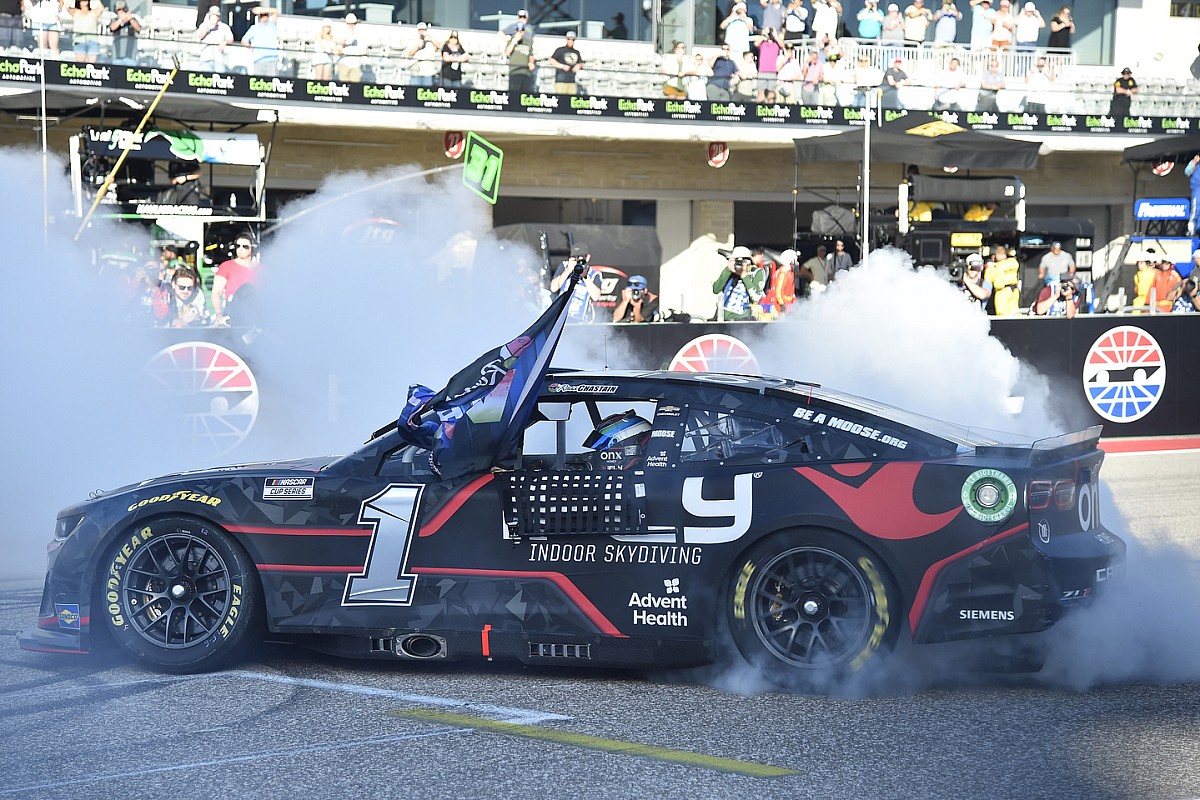 Tyler Reddick held the lead as a late caution sent Sunday’s race into a two-lap overtime and Chastain used a deft move in the essess to reclaim the lead.

Chastain took the white flag – signaling the last lap – as the leader but A.J. Allmendinger and Alex Bowman did not let him get away.

Coming to the final turn, Chastain swerved into Allmendinger, who hit Bowman, sending both cars off course and Chastain escaped with his first career Cup Series victory in 121 starts.

The win is the first for Trackhouse Racing, which is in just its second fulltime year of Cup series competition. The team is co-owned by Grammy Award-winning rapper Pitbull and former driver Justin Marks.

After coming to a stop on the frontstretch, Chastain exited his No. 1 Chevrolet was presented a watermelon, which smashed on the track. Chastain grew up as a watermelon farmer in Florida.

“It’s insane,” Chastain said. “To go up against some of the best with A.J., I mean, I know he is going to be upset with me, but we raced hard, both of us, and he owes me one.

“But when it comes to a Cup win, man, I can’t let that go down without a fight. … People don’t know how good this group is. I can’t believe Justin Marks hired me to drive this car.”

Asked how he managed to win after losing control of the race on the final restart, Chastain said, “I don’t know how we got back by. I was so worried about A.J. on the second-to-last restart that I let Tyler drive right by both of us.

“I was thinking about on those late restarts, my dad used to make me race on old tires, and back then I was not going to win. It was in my head before I even started. It crossed my mind, like, ‘We’re not going to win, we’re on old tires’, but I couldn’t think that way.

Following the break between Stages 2 and 3, most of those who did not pit late in Stage 2 elected to pit with Denny Hamlin the first off pit road.

Joey Logano was among those who stayed out and inherited the lead. On the restart on Lap 33, Logano was followed by Blaney, Chastain and Cindric.

Logano overshot Turn 1 on the restart which allowed Chastain to move into the lead.

Cindric spun on Lap 34 in Turn 10 and was nearly hit by Bell. NASCAR displayed a caution on Lap 35 for debris on the track in Turn 11.

A handful of teams, including Cindric and Logano, decided to pit. Chastain remained on the track and in the lead on the restart on Lap 37. He was followed by Allmendinger and Reddick.

On Lap 38, Bell was forced to pit under green with a steering issue.

With 30 laps remaining, Chastain maintained a small lead over Allmendinger as Chase Briscoe had worked his way to third.

NASCAR was forced to throw a caution on Lap 41 when Jones’ No. 43 stalled on the track with no power.

All the lead-lap cars elected to pit with Chastain the first off pit road. On the restart on Lap 44, Chastain was followed by Briscoe and Reddick. Elliott had a slow stop and came out 11th.

On Lap 45, NASCAR displayed another caution for debris on the race track, this time for a loose left-rear wheel that came off Bubba Wallace’s No. 23 Toyota.

A handful of cars pit but Briscoe remained on the track and in the lead when the race resumed on Lap 47. He was followed by Chastain, Reddick and Allmendinger.

Entering Turn 11 after the restart, Chastain powered around Briscoe to reclaim the lead.

With 20 laps to go, Chastain led the way but Briscoe remained in close striking distance with Allmendinger in third and Kyle Busch moved to fourth.

On Lap 54, NASCAR displayed the sixth caution of the race as Ricky Stenhouse Jr.’s No. 47 stalled on the track.

Several cars elected to pit. A handful of cars pit just prior to the caution coming out, including Kevin Harvick, Cole Custer and Aric Almirola.

When the race resumed on Lap 57, Chastain – who stayed out – led the way followed by Allmendinger, Briscoe, Bowman and Elliott.

On the restart, Briscoe was penalized for short cutting the course in Turn 5 and had to serve a pass-through penalty on pit road. NASCAR later rescinded the penalty because it determined Allmendinger had forced him off the course.

Fluid on the track brought out the seventh caution of the race on Lap 59. Most of the lead-lap cars remained on the track and Chastain still led on the restart with nine laps remaining.

Hamlin and Almirola both spun shortly after the restart but were able to continue.

Loris Hezemans’ No. 27 came to a stop on the track near Turn 3, which brought out a caution on Lap 64.

When the race resumed with three laps remaining, Chastain led the way followed by Allmendinger, Reddick, Bowman and Elliott.

Several cars went off course entering Turn 1 and ended up in the gravel – including Logano, Kurt Busch and Kyle Busch – just as Reddick powered into the lead. NASCAR was forced to throw a caution for debris, which sent the race into a two-lap overtime.

Lining up for the start of overtime were Reddick, Chastain, Allmendinger, Bowman and Blaney.

Hamlin was among those who did not make a green-flag stop and cruised to the Stage 2 win over Kyle Busch. It’s Hamlin’s first stage victory of the 2022 season.

Logano was third, Blaney fourth and Almirola rounded out the top-five.

Following the break between Stages 1 and 2, those drivers who did not pit prior to the stage break did so and Suarez was first off pit road.

On the restart on Lap 18, Cindric – among those who stayed out – was followed by Reddick and Chastain.

Shortly after the restart, Daniel Suarez, who restarted 20th, spun after contact from Corey LaJoie and suffered a left-rear flat tire and had to limp more than 3 miles back to pit road.

With 10 laps to go in the stage, Michael McDowell was penalized for short-cutting the course in the esses as Cindric continued to lead.

On Lap 24, both Cody Ware and Hezemans were penalized for short-cutting the course as well.

With five laps to go, Cindric’s advantage over Chastain remained at about half-a-second as Allmendinger made his way to third.

With three laps remaining, several teams again elected to pit before the stage break, including both Cindric and Chastain.

Both LaJoie and William Byron were penalized for speeding during their stops and had restart the final stage from the rear of the field.

Hamlin stayed out and inherited the lead on Lap 28.

Suarez led every lap and held off Blaney to take the Stage 1 win, only the second stage victory of his career.

Bowman was third, Logano fourth and Kyle Larson rounded out the top-five.

Blaney started on the pole but Suarez got around him in Turn 11 to lead Lap 1.

On Lap 2, Hezemans was penalized for cutting the course through the esses and had to serve a pass-through penalty on pit road.

With 10 laps remaining in the stage, Suarez had built a 1.2-second lead over Blaney with Reddick in third.

On Lap 10, Kyle Busch spun in Turn 12 after contact from Elliott but was able to continue on without a caution.

Several teams elected to make green-flag pit stops on Lap 13 prior to the stage break, including Kyle Busch, Hamlin, Wallace and Allmendinger.

Andy Lally’s No 78 car failed pre-race inspection three times and had to perform a pass-through after taking the green flag on Sunday.