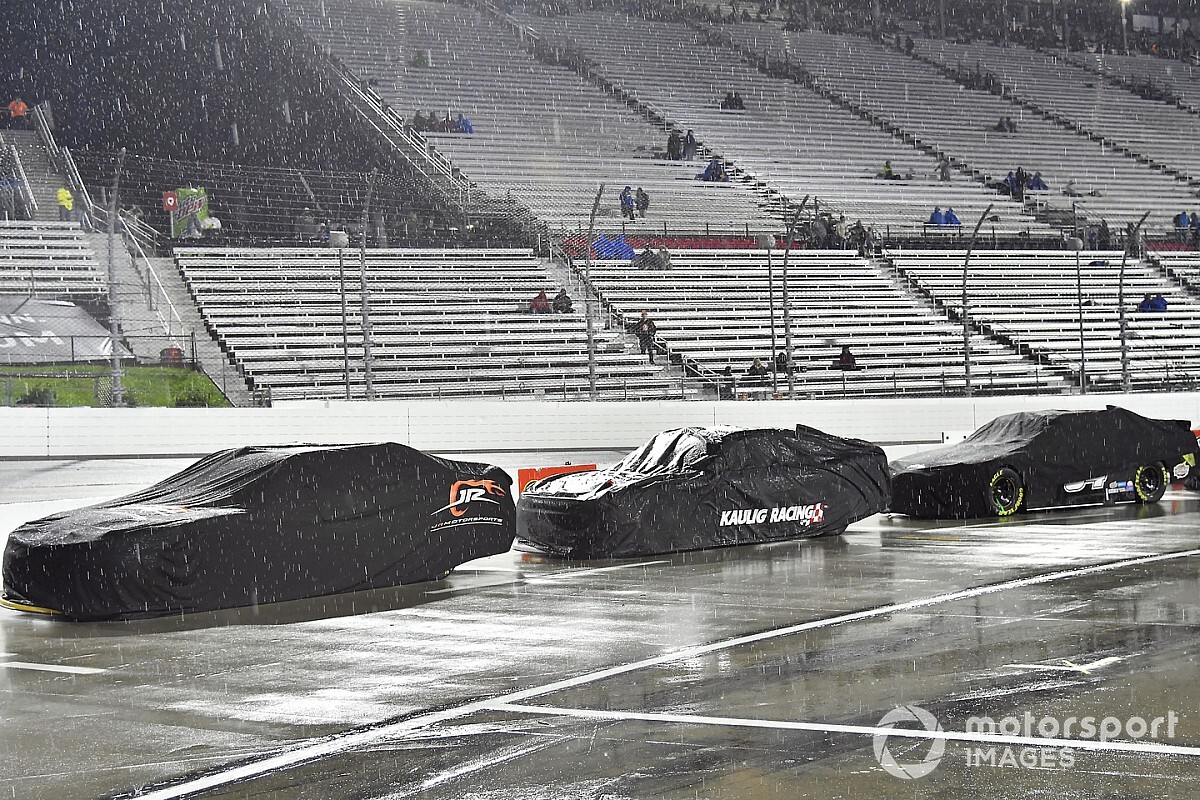 Friday night’s race was halted by rain with 29 of 60 laps remaining in Stage 2 and following nearly a 3-hour delay it was finally called.

The remainder of the race has been postponed until 12:25 p.m. ET Sunday and will be broadcast live on Fox Sports 1.

Had Stage 2 been completed, the race would have been considered official.

Following the break between Stages 1 and 2, several lead-lap cars elected to pit with Austin Cindric the first off pit road.

Moffitt was among those who stayed out and inherited the lead. The race returned to green on Lap 68.

On Lap 71, Jones went inside of Moffitt and claimed the lead for the first time in the race.

Berry went to the inside of Jones off Turn 4 and grabbed the lead on Lap 78.

Jones got back around Berry on Lap 88 for the lead and two laps later a caution was displayed again for rain. The race was quickly placed under the red flag and cars brought down pit road.

Noah Gragson took the Stage 1 win under caution when Riley Herbst spun in Turn 1 with one lap remaining in the stage, which triggered a multi-car incident.

Harrison Burton started on the pole and led the first five laps until Jade Buford spun in Turn 1 spun and placed the race under caution.

The race returned to green on Lap 11 with Harrison Burton leading the way and A.J. Allmendinger running second.

Allmendinger developed a flat tire after the start and was forced to make a green-flag stop for new tires.

On Lap 26, NASCAR displayed a competition caution to allow teams to check tire wear. Only a handful of cars elected to pit but Moffitt was penalized for speeding on pit road and had to restart from the rear of the field.

The race returned to green on Lap 33 with Harrison Burton still out front.

On Lap 39, Gragson worked his way around Cindric to move into the second spot behind Harrison Burton who had built a 1.4-second lead.

Stefan Parsons spun off Turn 4 on Lap 42 to bring out another caution. The lead-lap cars remained on the track and the race returned to green on Lap 48.

Jeb Burton and David Starr both had to restart from the rear of the field for failing to choose their restart lane in a timely fashion.

Michael Annett and George Gorham Jr. both spun in Turn 1 on Lap 50 to produce another caution. A handful of lead-lap cars, including Harrison Burton, elected to pit under the caution.

The race returned to green on Lap 56 with Gragson in command.