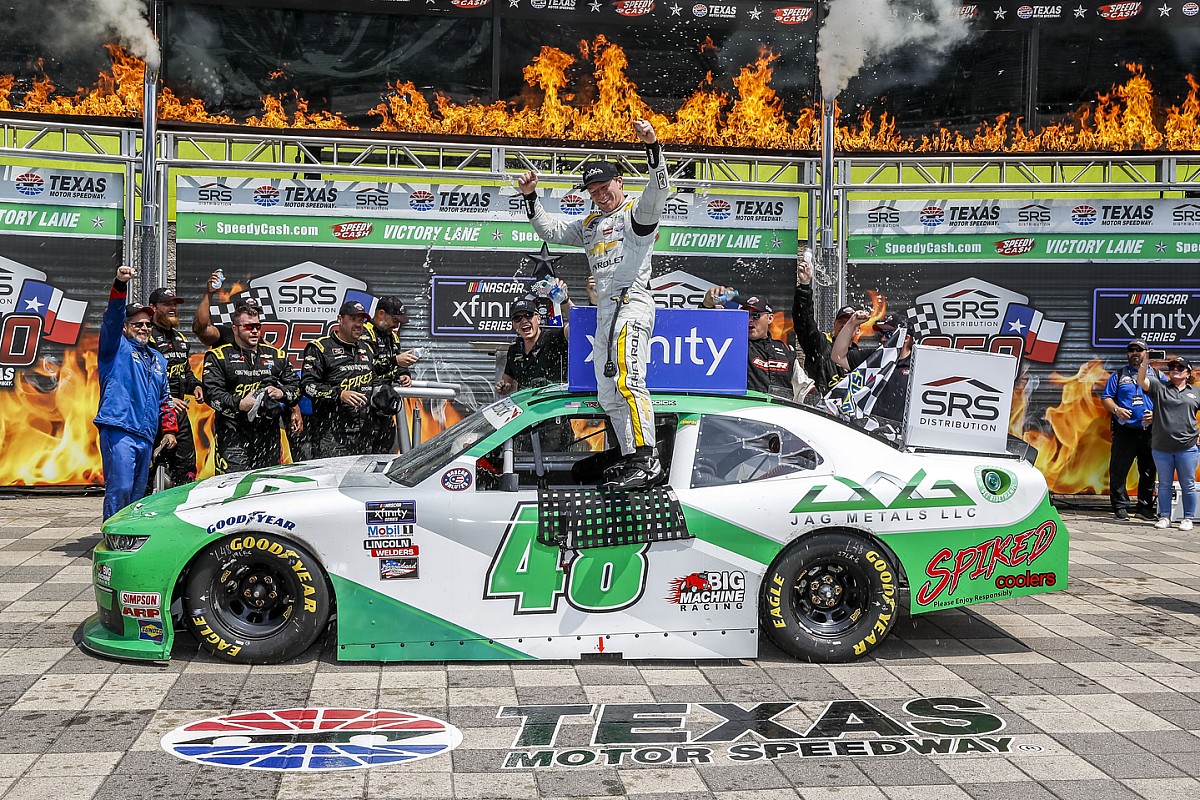 Reddick, a regular in the Cup Series, was making just his second start of the year driving Big Machine Racing’s No. 48 Chevrolet.

The win is the first for the organization – owned by Scott Borchetta – which only began fielding a team last season.

Just before the final caution of the race, Reddick passed Brandon Jones on Lap 137 of 167 laps to take the lead for the first time in the race. He got a great jump on the restart with 21 laps to go and held off William Byron by 1.825 seconds for his 10th career win.

“Just a big thank you to Big Machine Racing for this opportunity,” Reddick said. “We had a good car at Darlington and I threw that away. It feels good to come back and redeem myself.

“These guys have been working really hard and they want to run up front. We’re going to come in here and try to help them be up front where they want to be. It’s really cool that we were able to get it done in our second time out.”

Asked about his emotions after the race, the team’s crew chief Patrick Donahue said, “Crying a little bit. We just started this thing last year.

“Man, oh man, we’ve worked so hard and tore so much stuff up. Everybody on this team that believed in what I wanted to do. I can’t even tell you.”

Following the break between Stages 2 and 3, all the lead-lap cars pit with Berry the first off pit road. Cassill was penalized for an uncontrolled tire and Herbst was penalized for equipment interference and both had to restart from the rear of the field.

Berry led the way when the race returned to green on Lap 88.

Berry spun off Turn 2 on the restart, which sent other drivers for spins as well including Noah Gragson, Ty Gibbs, Brandon Jones and Matt Mills. Allgaier inherited the lead after the incident.

When the race returned to green on Lap 95, Allgaier was followed by Byron, Truex, Mayer and Reddick.

Gragson’s battered No. 9 spun and wrecked in Turn 1 on Lap 98 to bring out another caution. The accident brought an end to Gragson’s race.

The race returned to green on Lap 104 with Allgaier followed by Byron, Mayer and Truex.

Byron finally got around Allgaier to take the lead for the first time in the race on Lap 112.

On Lap 118, Allgaier spun in Turn 2 with what appeared to be a flat left-rear tire to bring out the eighth caution of the race.

Most of the lead-lap cars pit with Cassill the first off pit road thanks to a two-tire pit stop. Austin Hill was among those who stayed out and inherited the lead.

On the restart on Lap 123, Hill was followed by Jones, Ryan Ellis, Cassill and Byron.

Ryan Sieg and David Starr wrecked on Lap 124 to almost immediately place the race back under caution.

Austin Hill remained in the lead when the race returned to green on Lap 129.

Sieg had a tire go down and wrecked in Turn 1 on Lap 130 which brought out the 10th caution of the race.

The race resumed on Lap 135 with Austin Hill still in the lead. Jones quickly got around Hill on the restart to take the lead for the first time in the race.

Reddick got past Jones to grab the lead on Lap 137 just before Alex Labbe spun off Turn 4 on Lap 138, which triggered a seven-car wreck on the frontstretch. The incident also required some repair to the SAFER barrier.

A handful of cars pit and Jones was penalized for speeding on pit road and had to restart from the rear of the field.

The race resumed on Lap 146 with Reddick out front followed by Austin Hill, Byron and Allmendinger.

Berry held off a tough challenge from teammate Allgaier to claim the Stage 2 win, his third stage victory of the 2022 season.

Byron was third, Reddick fourth and Gragson rounded out the top-five.

Following the break between Stages 1 and 2, most of the lead-lap cars pit with Jones the first off pit road.

Berry was among the drivers who stayed out and inherited the lead. On the restart on Lap 47, Berry was followed by Cassill and Reddick. Jones lined up 17th.

On Lap 57, Sheldon Creed wrecked off Turn 4 to bring out the fourth caution of the race. Myatt Snider and Austin Hill made contact on the track after the caution was displayed.

The race resumed on Lap 63 with Berry out front followed by Reddick and Byron.

With five laps remaining in the stage, Berry held a slight advantage over Allgaier with Byron in third.

Gragson claimed the Stage 1 win under caution as C.J. McLaughlin and Gibbs both spun with two of 40 laps remaining.

Gragson started on the pole and took command early, running out to a 1.4-second lead over Allgaier after 15 laps.

With 20 laps remaining, Allgaier had cut Gragson’s lead down to less than half-a-second while Jones ran third.

Just after Allgaier moved into the lead on Lap 22, the No. 6 of Ryan Vargas appeared to lose its engine and dropped fluid on the track to bring out a caution.

Most of the lead-lap cars stayed on and track and Allgaier led the way when the race returned to green on Lap 31. He was followed by Gragson and Jones.

Gragson powered to the lead shortly after the restart.

On Lap 32, McLaughlin spun off Turn 2 to put the race back under caution. Daniel Hemric had also tagged the wall and pit for repairs.

A number of cars elected to pit under the caution. The race returned to green on Lap 37 with Gragson out front.

Among the drivers who had to start the race from the rear of the field were Gibbs and Anthony Alfredo (unapproved adjustments) and Cassill (backup car).