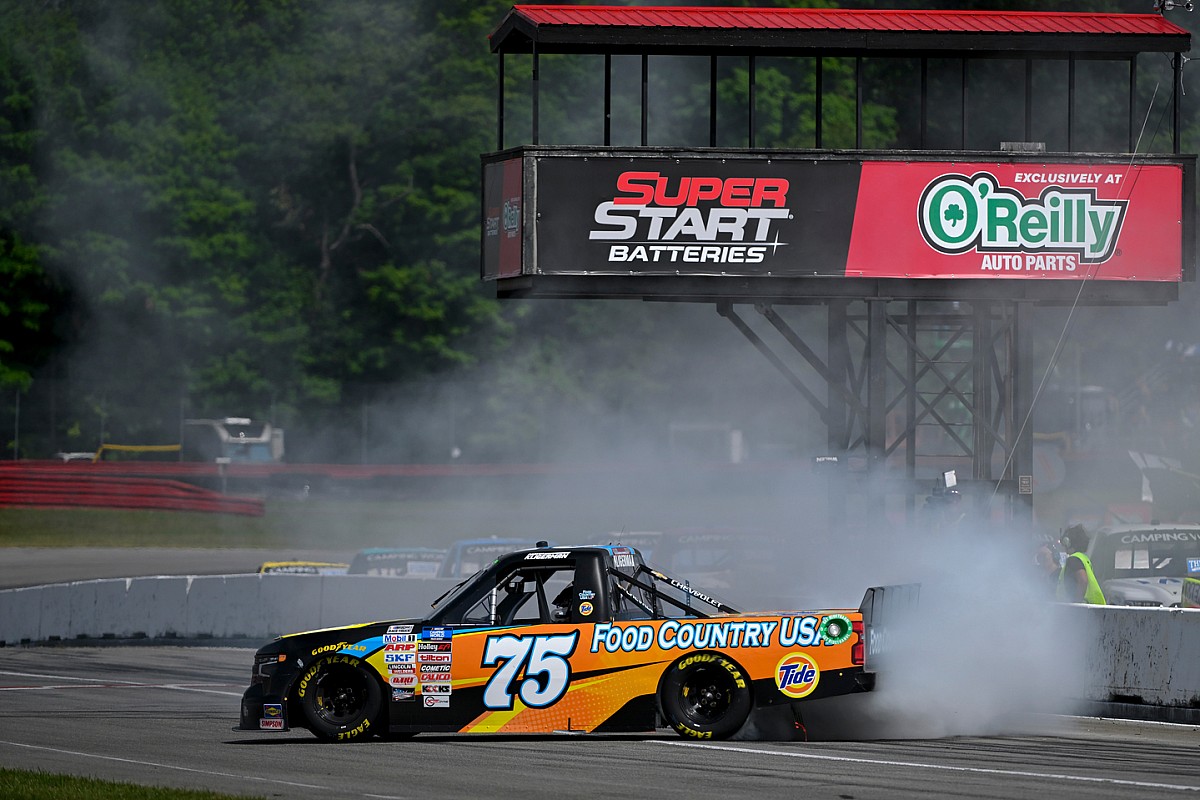 Kligerman, who drives a part-time schedule for Henderson Motorsports, dominated much of Saturday’s race but found himself in the final stage consistently hounded by Smith for the lead.

Smith cleared Kligerman on a restart with eight of 67 laps remaining for the lead but late caution for a stalled truck on the track set up a final restart with three laps to go. This time, it was Kligerman who out-dueled Smith and edged him by 0.119 seconds for the victory.

The win is the third of Kligerman’s career but first since 2017. He previous two Truck Series wins both came at Talladega (Ala.) Superspeedway.

After taking the checkered flag, Kligerman’s crew chief told him over the team radio to “burn it down” and that’s exactly what Kligerman did, surrounding his No. 75 Chevrolet with a large cloud of smoke.

Kligerman, 31, also collected a $50,000 bonus for the win as part of the three-race Triple Truck Challenge.

“It’s hard to put into words,” Kligerman said. “I was real emotional on the cool-down lap because this whole team is a team of second chances. Two years ago, I thought my driving days were done. This team gave me call, wanted to get back racing and it’s been steady improvement up until now.

“It’s unbelievable when you put a talented group of humans together what you can achieve and we are doing this on an absolute fraction of what the trucks were up against.

“And – finally – a road course win. I started in road courses and I came into NASCAR thinking, ‘Oh that will be easy’ and it’s taken me more than a decade to get a win. This is the small team that could, but we’re not a small team that doesn’t win. We win.”

Smith, who all-but clinched the Truck Series regular season title with his runner-up finish, said he was not going to wreck Kligerman for the win.

“It was so hard to pass and those final last set of corners are so awkward to try and do something. It was going to be hard for me to wreck the guy who pushed me to my Daytona win, so I just tried to move him out of the way and cross him over but like I said it just an awkward set of corners to do that,” he said.

Following the 3-minute break between Stages 2 and 3, the field made a round of controlled pit stops. Dylan Lupton sped on pit road during the stop and had to restart from the rear of the field.

The race returned to green on Lap 43 with Zane Smith out front, followed by Kligerman, Corey Heim, Eckes and Hocevar.

In Turn 4 on the restart, Kligerman was able to get back around Zane Smith and reclaim the lead.

On Lap 50, Tyler Ankrum was forced to pit under green with a flat right-rear tire.

Justin Marks, co-owner of Trackhouse Racing in the Cup Series, slid into the gravel trap near Turn 11 on Lap 51 and wrecked hard into the tire barrier to bring out the fifth caution of the race.

The race resumed on Lap 54 with Kligerman out front, followed by Zane Smith, Heim, Hocevar and Eckes.

On Lap 55, Jack Wood and Austin Wayne Self wrecked in Turn 1 which also collected the trucks of Blaine Perkins and Timmy Hill.

The race resumed with eight laps remaining and Kligerman still leading with Zane Smith lined up alongside him.

Zane Smith powered around Kligerman shortly after the restart to reclaim the lead.

NASCAR was forced to throw a caution on Lap 62 when Heim’s No. 51 fell off the pace and then stalled on the track.

The race returned to green with three laps to go with Zane Smith out front, followed by Kligerman, Hocevar, Friesen and Chandler Smith.

Zane Smith passed Kligerman in Turn 4 on the final lap to take the Stage 2 win, his seventh stage victory of the 2022 season.

Heim ended up third, Eckes fourth and Hocevar rounded out the top-five.

Following the 3-minute break between Stages 1 and 2, the field made controlled pit stops. When the race resumed on Lap 22, Kligerman led the way followed by Zane Smith and Nemechek.

Ben Rhodes was forced to pit under green on Lap 24 to address engine issues. Rhodes was also penalized for speeding on pit road and had to serve a pass-through penalty.

With 10 laps remaining in the stage, Kligerman maintained a small advantage over Zane Smith as Heim moved into third.

On Lap 35, NASCAR ordered the No. 4 Toyota of John Hunter Nemechek to pit road after it began trailing a lot of smoke. When Nemechek arrived on pit road, he drove the truck straight into the garage.

With three laps to go, Friesen got knocked out of the way by Hocevar, who moved into the top-five.

Kligerman held off a fast-approaching Zane Smith in a one-lap shootout to take the Stage 1 win.

Nemechek was third, Heim fourth and Grant Enfinger rounded out the top-five.

Heim started on the pole but Kligerman caught him and went around on the outside in Turn 4 to move out front on Lap 4.

On Lap 8, Mason Flippi’s No. 46 stalled on the track and NASCAR was forced to display a caution. As soon as the caution came out, Flippi was able to restart his truck and return to the course.

The race returned to green on Lap 11 with Kligerman out front followed by Heim and Nemechek.

On Lap 13, Matt DiBenedetto lost power in his No. 25 Chevrolet. He was able to regain it but had dropped to 30th in the running order.

With five laps remaining in the stage, Kligerman had built a 2.1-second lead over Heim with Nemechek third and Zane Smith fourth.

NASCAR displayed a caution on Lap 17 when Trey Burke III’s No. 20 Chevrolet stalled on the track. The race resumed on Lap 20 with Kligerman still out front.

Self, Kraus and Kris Wright all started from the rear of the field due to unapproved adjustments.