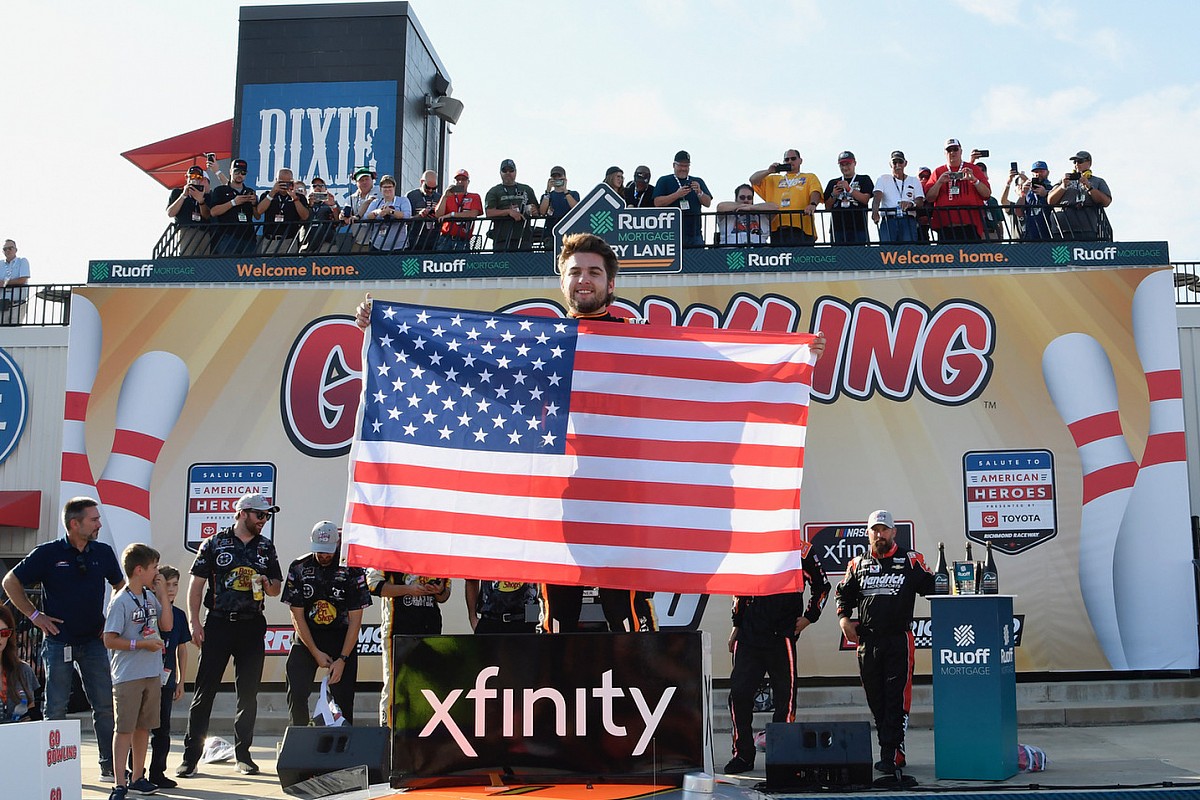 Gragson got a great jump on a restart with seven of 250 laps remaining and held off a fast-approaching Justin Haley who was on fresher tires to earn his second consecutive win of the 2021 season.

Gragson, 23, snapped a 49-race winless streak with his victory a week ago at Darlington (S.C.) Raceway.

“You guys are the best,” Gragson said over his team radio after taking the checkered flag. “This is for everyone who lost their lives on this special day. Not for us.”

Saturday was the 20th anniversary of the Sept. 11, 2001, terrorist attacks in the United States.

Once again, Gragson did a massive burnout on the frontstretch and climbed the fence to the delight of the fans following his TV interview.

“I knew they had (better) tires but the thing that really kept us alive were those two cautions at the end,” Gragson said. “Today’s not about this team or this win. It’s about everybody who lost their lives 20 years ago.

“I appreciate all your race fans for coming out. It’s really special to win here at Richmond. Beating Dale Jr. was pretty cool – I never thought I’d say that. We’re starting to get momentum at the right time.”

The win is the fourth of Gragson’s career. Next weekend’s race at Bristol (Tenn.) Motor Speedway is the final race of the regular season in the Xfinity Series. The playoffs begin in two weeks at Las Vegas, Gragson’s hometown.

Dale Earnhardt Jr. finished 14th in his lone NASCAR start of the season.

Following the break between Stages 2 and 3, the lead-lap cars all pit with Hemric the first off pit road. On the restart on Lap 159, Hemric was followed by Gragson, Gibbs, Harrison Burton and A.J. Allmendinger.

Gragson powered around Hemric on the inside to take the lead after the restart.

On Lap 166, Gibbs went to the outside of Gragson and returned to the lead.

Bayley Currey wrecked in Turns 3 and 4 on Lap 170 after contact with Matt Mills to bring out another caution. Ryan Sieg elected to pit but the remainder of the lead-lap cars stayed on the track. Sieg had an uncontrolled tire penalty and had to restart from the rear of the field.

Gibbs continued to lead when the race returned to green on Lap 176.

Harrison Burton got a strong restart on the inside line and moved quickly into the lead.

The caution came back out on Lap 182 when the Landon Cassill stalled on the track after making contact with the wall.

Most lead-lap cars pit but Sam Mayer, Haley, Earnhardt and a few others remained on the track. Harrison Burton was the first off pit road among those who pit.

On the restart on Lap 188, Mayer, Haley and Earnhardt were followed by Herbst and Brown. Harrison Burton lined up sixth.

By Lap 192, Harrison Burton drove into the lead on new tires as Mayer dropped to second. Gibbs moved into second on Lap 195.

With 50 laps remaining, Harrison Burton maintained about a 1-second lead over Gibbs while Allmendinger ran third.

Josh Williams spun around on Lap 223 after contact with Akinori Ogata to bring out a caution. Most of the lead-lap cars pit for new or slightly-used tires but Allmendinger remained on the track and inherited the lead.

Earnhardt was penalized for speeding on pit road and had to restart from the rear of the field.

On the restart on Lap 231, Allmendinger was followed by Austin Cindric and Jones – all of whom stayed out. Harrison Burton lined up fourth on slightly used tires. Haley was the first on new tires and lined up 13th.

Tommy Joe Martins wrecked on the restart to immediately bring the caution back out.

The race returned to green with 14 laps remaining and Allmendinger still in the lead.

Gragson quickly powered to the front and around Allmendinger to retake the lead right before Jeremy Clements spun on Lap 238 causing the ninth caution of the race.

When the race returned to green on Lap 244, Gragson led the way followed Nemechek, Allmendinger, Allgaier and Jones. Cindric pit for new tires under the caution.

Gibbs led the final 53 laps and took the Stage 2 win under caution due to a late-stage wreck involving C.J. McLaughlin and Jade Buford.

Following the break between Stages 1 and 2, the lead-lap cars all pit with Cindric the first off pit road. Michael Annett was penalized for speeding on pit road and had to restart the race from the rear of the field.

On the restart on Lap 85, Cindric was followed by Hemric, Harrison Burton and Gragson.

Hemric powered to the lead on the outside on the restart just before Martins spun off Turn 2 on Lap 86 to bring the caution back out.

The race returned to green on Lap 92 with Hemric out front followed by Cindric and Gragson.

Gibbs made his way around Hemric on Lap 98 to take the lead.

With 50 laps remaining in the second stage, Earnhardt moved into the top-10 for the first time in the race. He had started the race in 30th.

With 30 laps to go, Gibbs held a 1.8-second lead over Allmendinger while Cindric was third and Harrison Burton ran fourth.

Allmendinger cut Gibbs’ lead to under a second with 20 laps remaining in the stage as Harrison Burton moved into third.

McLaughlin fell off the pace and was hit by Buford entering Turn 3 to bring out a caution on Lap 147.

Allmendinger lost the lead with five to go and ran Martins back down at the checkered flag to claim the Stage 1 win, his ninth stage victory of the 2021 season.

Cindric was third, Gibbs fourth and J.J. Yeley rounded out the top-five.

Cindric started on the pole and led every lap until NASCAR displayed a competition caution on Lap 36 to allow teams to check tire wear.

During the caution, Jeb Burton turned his ignition switch on and off to conserve fuel but his No. 10 Chevrolet failed to re-fire.

Most of the lead-lap cars remained on the track and Cindric led the way on the restart on Lap 43.

On Lap 46, Allmendinger got around Cindric to take the lead for the first time in the race while Allgaier moved into second.

Martins made his way up to second on new tires on Lap 57 as Allmendinger continued to lead and Cindric third.

With 10 laps remaining in the stage, Allmendinger maintained a small lead over Martins, who was on much fresher tires. Cindric was third and Gibbs fourth.

Martins drove around Allmendinger to take the lead for the first time with five laps remaining.