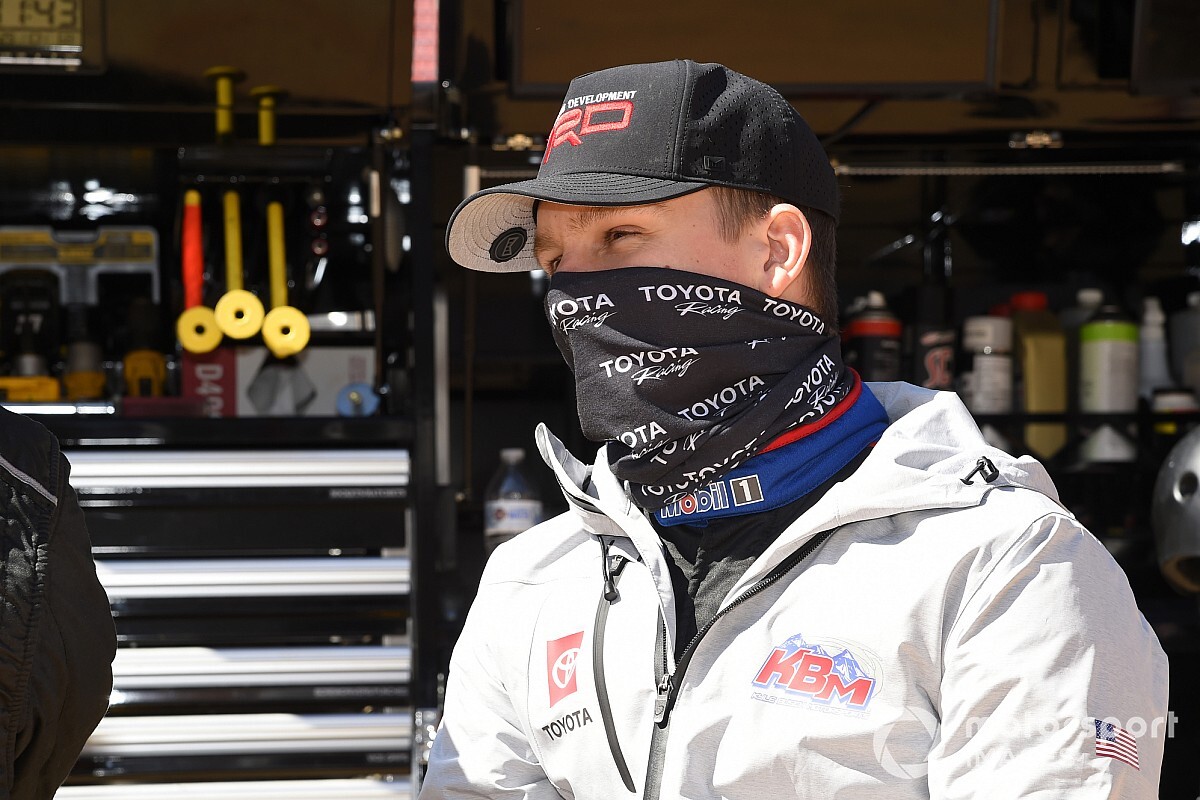 Nemechek dominated a caution-marred race Saturday at Richmond (Va.) Raceway, leading 114 of 250 laps, and held Busch at bay over the closing laps to win the ToyotaCare 250.

The win is Nemechek’s second of the 2021 NASCAR Truck season and he’s quickly established himself as a championship favorite in his first full season with Kyle Busch Motorsports.

“It’s pretty cool to be able to come out here and do what we were able to do. We had a really fast truck. I’m super proud of all of my guys and thankful for them,” Nemechek said.

“This puts a lot of different things in perspective, but I just can’t thank all of my guys, all of our partners, everyone enough for believing in me and giving me this opportunity. It’s two wins. #HereForWins. Let’s go get more.

“I know (Busch) tried getting me there at the end and this is the third time we’ve raced against each other this year and I’m one up on him so far in his own equipment, so that’s nice. Just super thankful, super-blessed.”

Following the break between Stages 2 and 3, all the lead-lap trucks pit with Nemechek the first off pit road.

Austin Hill was penalized for speeding on pit road during his stop and had to restart from the rear of the field.

The race returned to green on Lap 151, with Nemechek followed by Rhodes, Enfinger and Zane Smith.

On Lap 153, Derek Kraus spun and wrecked off Turn 2 which brought out another caution. The race returned to green on Lap 159 with Nemechek still out front.

Chase Purdy spun in Turn 1 on Lap 160 after trucks around him went four-wide and he got knocked around.

The race returned to green on Lap 166 with Nemechek still out front followed by Enfinger, Zane Smith and Raphael Lessard.

Jennifer Jo Cobb spun and wrecked on the backstretch on Lap 167 which brought out the seventh caution of the race. The race went back green on Lap 172 with Nemechek still in command.

On Lap 177, Cobb appeared to intentionally wreck Norm Benning as he came around the frontstretch, which brought out a caution.

NASCAR immediately parked Cobb for the rest of the race and she, her crew chief and spotter were told to report to the NASCAR hauler after the race.

The race returned to green on Lap 182 with Nemechek still in command.

Codie Rohrbaugh wrecked in Turn 1 on Lap 196 after contact with Austin Wayne Self to bring out another caution.

Most of the lead-lap trucks pit but Crafton stayed out and inherited the lead. Nemechek was the first off pit road among those who pit.

On the restart on Lap 210, Crafton was followed by Sauter, Chandler Smith, Danny Bohn and Ankrum. Nemechek lined up ninth.

Chandler Smith took Crafton and Sauter three-wide on the restart and came away with the lead for the first time in the race.

Kris Wright wrecked off Turn 2 on Lap 213 to once again put the race under caution. Chandler Smith continued to lead when the race returned to green on Lap 222.

Nemechek ran down Chandler Smith and finally was able to pass him for the lead on Lap 234, taking control of the race with 15 laps to go.

With 10 to go, Busch had moved back into second and tried to run down leader Nemechek before the finish.

Nemechek cruised to victory over Enfinger in Stage 2.

Rhodes was third, Austin Hill fourth and Busch rounded out the top-five.

Following the break between Stages 1 and 2, all lead-lap trucks elected to pit with Busch the first off pit road.

Stewart Friesen was penalized for speeding on pit road during his stop and had to restart the race from the rear of the field. Ankrum and Spencer Boyd were both penalized for having an uncontrolled tire during their respective stops.

When the race returned to green on Lap 80, Busch was followed by Enfinger, Nemechek and Rhodes.

On Lap 84, Tate Fogleman spun and wrecked in Turn 3 to bring out a caution. Hailee Deegan also appeared to collect some damage in the incident.

The race returned to green on Lap 99 with Busch out front followed by Enfinger and Nemechek.

On Lap 100, Nemechek was able to clear Busch to take the lead for the first time in the race. On lap later, Cobb spun in Turn 3 after contact with Howie DiSivino III to bring out a caution.

The race returned to green on Lap 105 with Nemechek in the lead followed by Busch and Rhodes.

With 15 laps to go in the stage, Nemechek maintained a more than 2-second lead over Enfinger while Rhodes ran third.

Enfinger held off a fast-approaching Nemechek to take the Stage 1 victory.

Busch was third, Rhodes fourth and Austin Hill rounded out the top-five.

Rhodes started on the pole and led the first two laps until Enfinger got around him and grabbed the lead on Lap 3.

After 20 laps. Enfinger had built a 1.7-second lead over Rhodes while Lessard had moved up to third. Busch, who started 12th, had made his way to sixth.

With 35 laps remaining, Enfinger maintained a 1.1-second lead over Rhodes while Lessard remained third and Busch had moved up to fourth.

On Lap 47, Busch made his way to second and set his sights on Enfinger to challenge for the lead.

With 10 laps to go in the stage, Nemechek made his way around Busch to take over the runner-up position behind Enfinger.