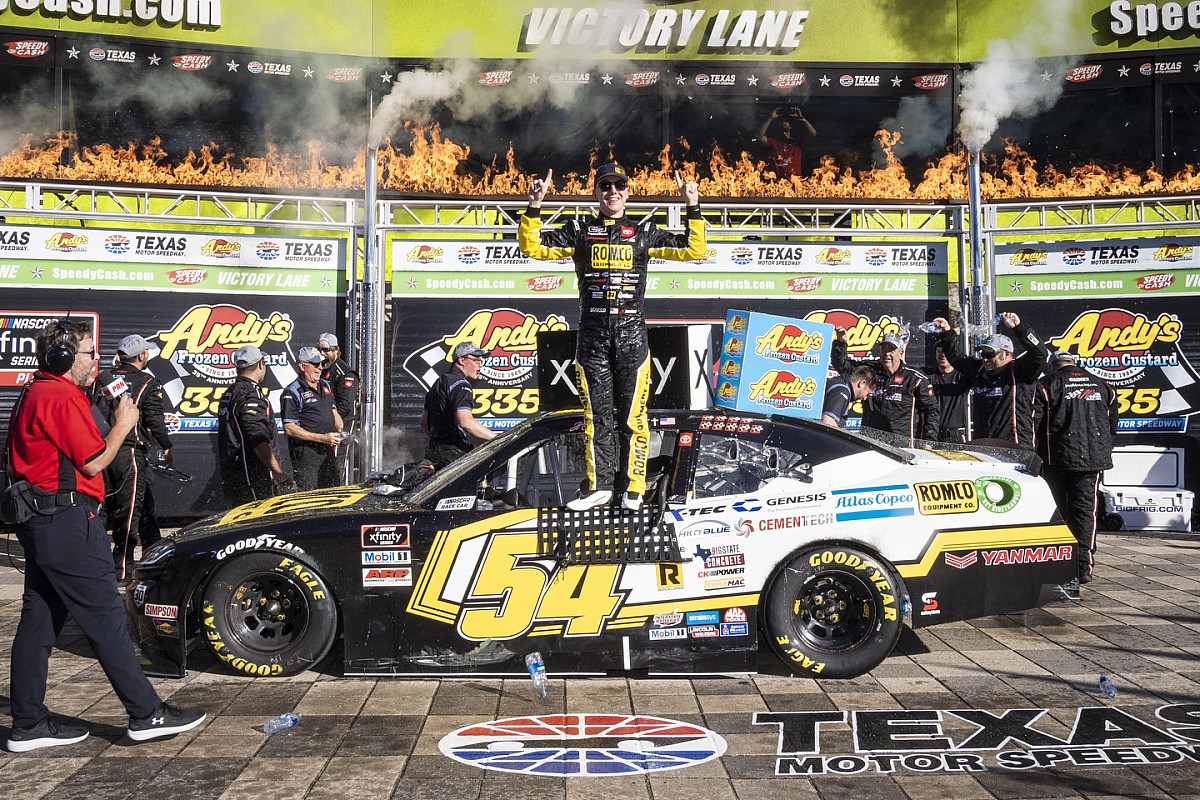 Nemechek, driving Joe Gibbs Racing’s No. 54 Toyota this weekend, had one of the fastest cars in Saturday’s race but his run to his second career series win was nearly derailed on Lap 144 of 200 when he was penalized for having a crew member over the wall too soon during his pit stop and had to restart from the rear of the field.

The 24-year-old Truck Series regular didn’t waste time any coming back through the field. A late-race caution on Lap 174 sent most of the lead-lap cars to pit road and Nemechek’s crew chief, Chris Gayle, elected to take just two new tires.

Nemechek lined up second on the restart behind Harrison Burton, who stayed out, and moved into the lead with 19 laps remaining. He easily held off Daniel Hemric by 1.316 seconds to score the victory at Texas Motor Speedway.

The first series victory for Nemechek came in 2018 when he drove for Chip Ganassi Racing.

“I think I’ve grown a lot as a driver. I’ve been put in positions like that in the Truck Series as well,” Nemechek said. “I can’t say enough about this whole team. The No. 54 has been fast every single week and my goal coming in was to win.

“I had to win to prove to myself that I can do this. It was just like taking a step back to the Truck Series – I wanted to get back to Victory Lane. It was an amazing accomplishment to get this one done and beating a teammate as well.”

With the win, the No. 54 is now eligible to compete for the 2021 owner’s championship and Nemechek will drive the car in the season finale at Phoenix.

Hemric’s runner-up finish was the 10th of his career. Noah Gragson was third, Justin Allgaier fourth and Austin Cindric rounded out the top-five.

With two races remaining in the semifinal round of the playoffs, the four drivers in danger of elimination are Hemric, Justin Haley, Harrison Burton and Brandon Jones.

Following the break between Stages 2 and 3, all the lead-lap cars pit with Nemechek the first off pit road. A.J. Allmendinger and Gragson both had long pit stops. Both also pit a second time.

Haley was penalized for two uncontrolled tires and had to restart from the rear of the field.

The race returned to green on Lap 98 with Nemechek out front, followed by Hemric and Sam Mayer. Allmendinger restarted 28th and Gragson 29th.

On Lap 100, Tanner Berryhill spun in Turn 2 and ended up collecting the cars of Dylan Lupton and Jade Buford in a wreck. All three cars were knocked out of the race.

Allmendinger pit during the caution to top off on fuel but did not take on new tires. The race resumed on Lap 109.

With 80 laps to go, Nemechek continued to lead the way by 1.5 seconds over Hemric while Allgaier move into third.

On Lap 142, C.J. McLaughlin spun off Turn 4 and landed in the frontstretch grass to bring out the ninth caution of the race.

All the lead-lap car pit with Nemechek the first off pit road but was penalized for having a crew member over the wall too soon. Brown was also penalized for speeding on pit road. Both had to restart from the rear of the field.

Nemechek’s penalty handed the lead over to Hemric. The race returned to green on Lap 150 with Hemric out front, followed by Allgaier and Cindric.

With 40 laps remaining, Nemechek had powered his way back to ninth, but still trailed leader Hemric by nearly seven seconds.

Brandon Brown spun off Turn 2 and wrecked on the backstretch on Lap 173, which produced the 10th caution of the race.

Several lead-lap cars, including Hemric, decided to pit for new tires. Nemechek was the first off pit road after taking two new tires.

Harrison Burton remained on the track and inherited the lead. On the restart on Lap 180, Harrison Burton was followed by Nemechek, Hemric, Allgaier and Gragson.

Harrison Burton initially cleared for the lead on the restart but Nemechek was able to run him down and pass him to retake the lead on Lap 181.

With 10 laps to go, Nemechek held about a 1-second lead over Hemric as Gragson moved into third.

Nemechek easily held of Hemric to take the Stage 2 win.

Mayer was third, Jeb Burton fourth and Haley rounded out the top-five.

Following the break between Stages 1 and 2, several lead-lap pit but Hemric stayed out and inherited the lead.

On the restart on Lap 52, Hemric was followed by Nemechek and Mayer. Cindric, who pit, lined up 19th.

Debris in Turn 1 brought out the fifth caution of the race on Lap 56. The race returned to green on Lap 62 with Hemric out front.

Ryan Sieg wrecked on Lap 64 to bring out another caution. The lead-lap cars stayed on the track and the race returned to green on Lap 69.

Nemechek got around Hemric on Lap 72 to take the lead for the first time in the race. Hemric reclaimed the lead on Lap 73, only to see Nemechek returned to the top spot on Lap 74.

With 10 laps remaining in the stage, Nemechek maintained about a 1-second lead over Hemric as Mayer ran third.

Cindric held off Gragson in a one-lap shootout to take the Stage 1 win.

Allmendinger was third, Allgaier fourth and Michael Annett rounded out the top-five.

Allmendinger started on the pole and led the first 13 laps until Cindric went to the high side in Turns 1 and 2 and got around him to grab the lead on Lap 14.

On Lap 21, NASCAR displayed a competition caution to allow teams to check tire wear. Most of the lead-lap cars remained on the track and Cindric continued to lead the way on the restart on Lap 26.

Shortly after the restart, NASCAR was forced to throw another caution, this time for the stalled car of Landon Cassill in the area of Turn 4. Sam Mayer also picked up a tire rub from contact on the restart.

The race returned to green on Lap 31.

With 10 laps remaining in the first stage, Cindric held a small lead over Hemric as Nemechek moved into third.

A caution was displayed on Lap 41 for the stalled car on J.J. Yeley. Several lead-lap cars elected to pit, including Hemric, Jones and Nemechek. The race resumed with two laps remaining and Cindric still in the lead.