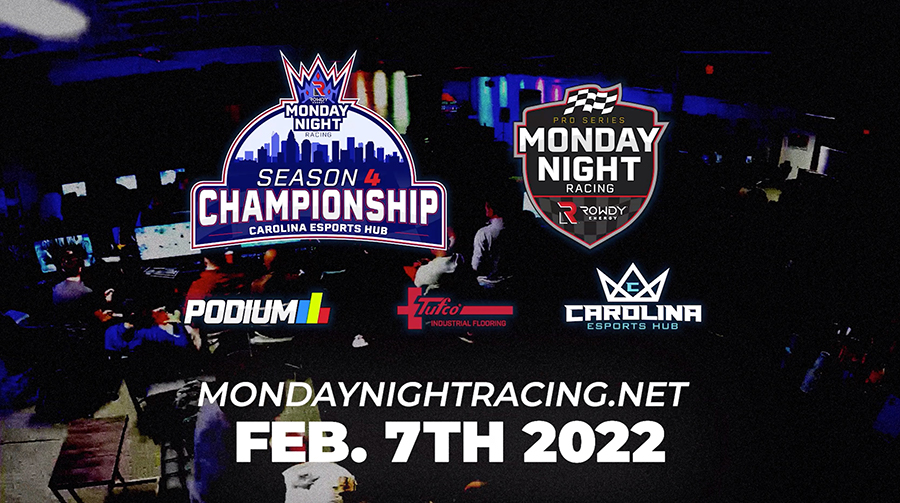 “We at MNR are proud and excited to announce a first of its kind premiere event where the drivers and fans can interact for the first time in-person,” said Ford Martin, Founder & Co- Owner of Monday Night Racing. “Over the last four seasons, MNR has reached new heights, and this event is the next step in our mission of helping grow the sport of simulated auto racing. We can’t thank all of our sponsors enough for helping us pull off this event.”

MNR has partnered with the Carolina Esports Hub, which is home to professional esports organization, the Charlotte Phoenix, to host this local area network (LAN) event at their facility in Charlotte, North Carolina.

“We are incredibly excited to be hosting the Monday Night Racing team for their Championship on February 7,” said Rick Suarez, Managing Director of the Carolina Esports Hub. “Racing is woven into the fabric of Charlotte and to give fans the ability to come and enjoy this in person is exactly how it should be. Having MNR, which is one of the very best iRacing leagues, come in with some of the top drivers and members throughout motorsports to put on this event is thrilling. I suspect this will be an incredibly entertaining evening.”

The “Rowdy Energy Monday Night Racing Pro Series Championship” will showcase MNR’s championship drivers that will battle to become the league’s fourth series champion. Each driver will be competing on stage in front of a live audience racing on equal sim racing setups, provided by Sim Seats.

The event will broadcast live on official iRacing channels, which include Twitch, YouTube, and iRacing.com. The broadcast will feature: a live pre-race show on stage presented by Tufco Flooring, followed by driver introductions, the championship race, the post-race show, a Victory Lane celebration presented by Rowdy Energy, and will conclude with the presentation of the MNR championship trophy.

Tickets for the “Rowdy Energy Monday Night Racing Pro Series Championship” are now on sale to the public. Doors open for the event at 6pm ET. Fans can purchase tickets here.

About Carolina Esports Hub: The Carolina Esports Hub is a multi-vertical organization founded with a mission to build a dynamic portfolio in esports and the gaming industry through strategic partnerships, investments, and acquisitions. We are dedicated to enriching the diverse population of the Carolina’s through esports education, competitive gaming and by providing inclusive opportunities for all.