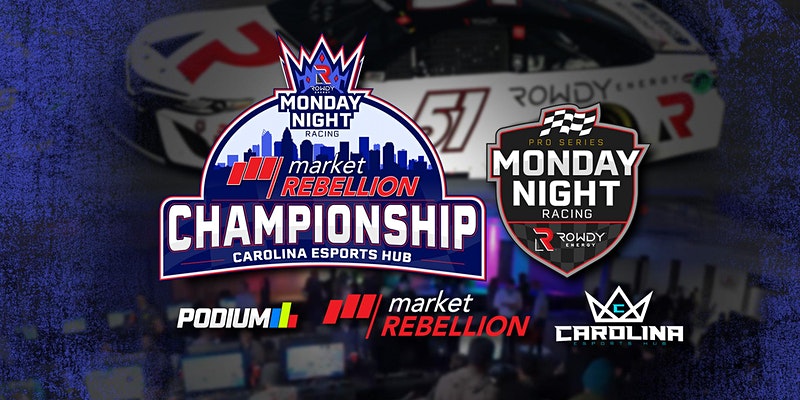 One of the motorsport industry’s defining iRacing leagues has taken its championship race to the next level tonight. Monday Night Racing will send more than a dozen of its top drivers, ranging from real-world NASCAR stars to some of the most prominent names in sim racing, to Carolina Esports Hub for the Rowdy Energy Monday Night Racing Pro Series Championship presented by Market Rebellion. Tickets for the event are available here, with doors opening at 6PM ET; for those who can’t attend, the race will stream live at 8PM ET across iRacing social channels.

Founded by FOX Sports’ Ford Martin, son of veteran NASCAR crew chief and Richard Childress Racing competition director Gil Martin, Monday Night Racing was started in 2020 as a league primarily for those working in the world of motorsport. The series rotates different types of cars and tracks throughout each of its seasons, running through the entire NASCAR ladder and various road racing vehicles and venues to create a diverse schedule. Drivers compete for the newly christened Bob Jenkins Memorial Cup, named after the 2021 NASCAR Hall of Fame Squier-Hall Award recipient and legendary voice of NASCAR and IndyCar racing who also called many of MNR’s early races.

Monday night’s event marks one of the largest stock car-focused sim racing gatherings in the history of professional sim racing. MNR has partnered with Carolina Esports Hub, home of professional esports squad and eNASCAR Coca-Cola iRacing Series team Charlotte Phoenix, to host the event, and will welcome hundreds of fans and industry professionals for the event. The run of show includes multiple sponsor panels, a driver question and answer session, and awards ceremonies, with race festivities set to start at 8PM ET and a green flag at 8:35.