McDowell, 37, earned his first career NASCAR Cup Series victory with his shocking win in the 2021 Daytona 500, which propelled him to the playoffs and a career-best 16th-place finish in the series standings.

“The last few weeks with getting ready for the 500 and all the media and all the preseason stuff, it is fun. It is fun being the Daytona 500 champion coming to Daytona,” McDowell said. “It has been a cool experience.

“I feel like there are times in the season last year where, not like you forget, but you just get back into the grind and things aren’t going all that great and you are kind of riding that season wave. Then in the off-season, and getting ready for this, it was a lot of fun because everyone wants to talk about winning the Daytona 500.

“It brings back a lot of great memories.”

It didn’t take long for McDowell to again grab the spotlight at Daytona once Tuesday night’s first practices of the 2022 season got underway.

While running in a draft with fellow Ford drivers, McDowell posted what turned out to be the fastest average lap speed (192.736 mph) of the two 50-minute sessions in his No. 34 Front Row Motorsports Ford.

McDowell appears to again have a car capable of contending in this Sunday’s Daytona 500.

“We sort of had a gameplan going into practice of trying to work with our Ford teammates and in particular with the Roush Fenway Keselowski cars,” he said. “We wanted to get out in that group and just kind of play around with the draft and not put ourselves in a bad situation where you’re two or three-wide, but just kind of line up so it worked out well.

“We were lined up four or five of the Fords and then we were catching the Toyota pack, so lap time here is very situational on where you get the draft and where you get the runs, but I feel really good about our Ford Mustang. We had good speed and it drove pretty well.” 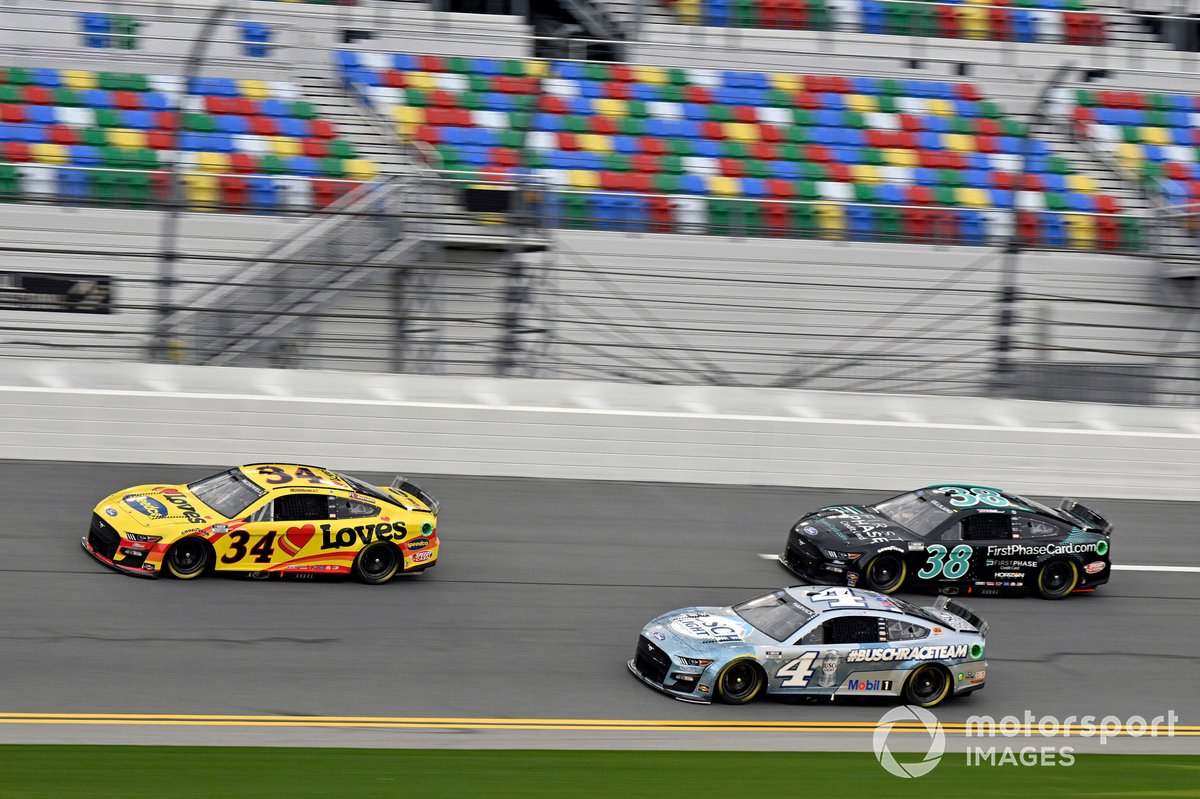 McDowell had been all over the map in his Cup career, driving for start-and-park rides and low budget teams but slowly worked his way onto teams which provided opportunities for good finishes – and if everything went perfect – maybe a win.

His record remained 0-for-357 entering last year’s Daytona 500 and while he had shown himself to be an accomplished superspeedway driver, he wasn’t exactly a popular pick to end his drought.

But the 500 has the penchant to produce unexpected results – and new winners.

“The significance of this race and the history of it – it just has more meaning than just your average NASCAR race,” McDowell said. “They are all important and they all have significance, but if there is one you are going to win, this is the one.

Leveling the playing field with a new car

Superspeedway races have typically provided a more level playing field for smaller or low-budget teams to contend for wins, something Front Row has used to its advantage.

However, the introduction of the NASCAR’s Next Generation race car this season is expected to have the same effect, at least initially.

All Cup teams must now purchase their chassis and most parts from NASCAR-approved suppliers. In recent years, NASCAR’s biggest organizations produced many of them in-house, which generally gave them a leg-up when it came on on-track performance.

“I grew up an open-wheel guy and I love watching IndyCar and get a lot of satisfaction from seeing a guy like Dale Coyne win races because he hired a good engineer and a really good driver. When they hit it right and they get the strategy right they can win an IndyCar race and beat Penske and Ganassi and Andretti and those big teams.

“I think the Next Gen car gives us and other teams the opportunity to do that in the Cup Series. When you get it right and hit everything right, you will see guys win races that you don’t typically see because a lot of the parts and pieces are pretty close.”