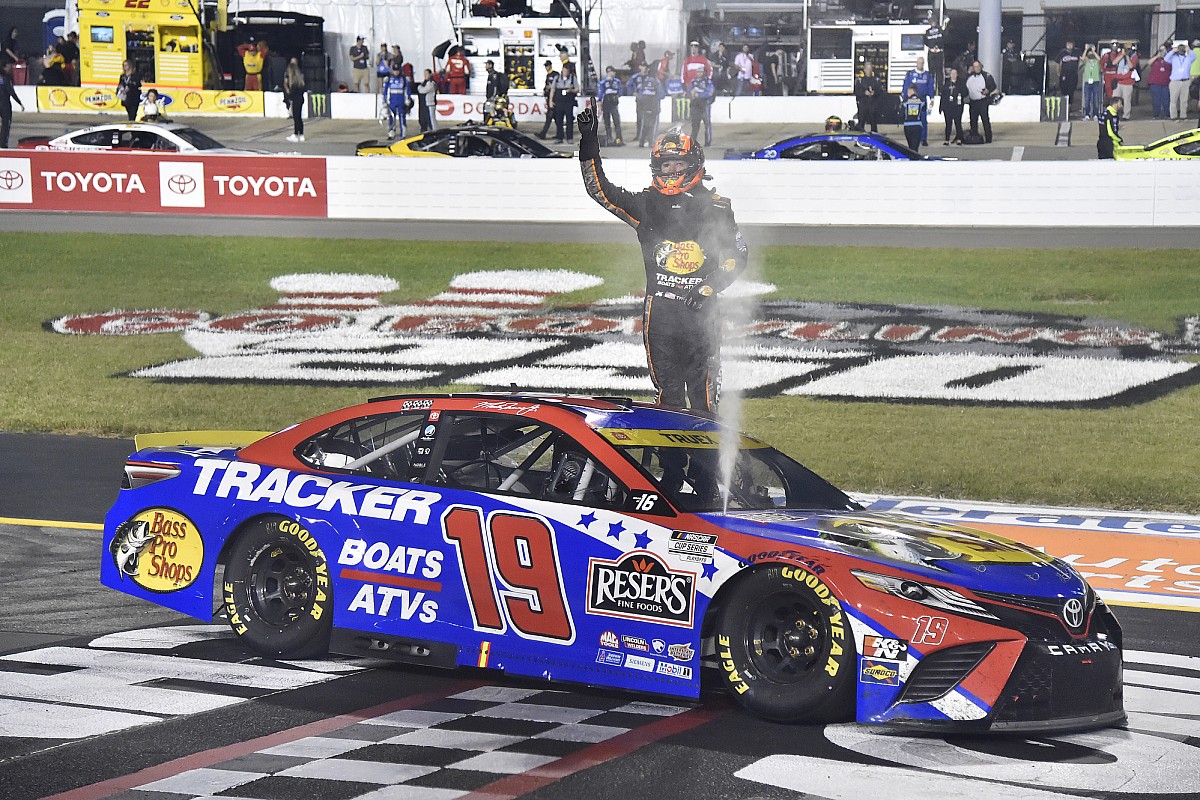 Truex, who was penalized by NASCAR for jumping the start of the race and ended up last in the running order, grabbed control of the race in the stage and never looked back.

Truex emerged as the leader following a round of green-flag pit stops on Lap 350 of 400 at Richmond (Va.) Raceway and held off his Joe Gibbs Racing Denny Hamlin by 1.417 seconds to earn his fourth win of the 2021 season.

The win sends Truex into the Round of 12 of the playoffs regardless of his performance in next weekend’s race at Bristol (Tenn.) Motor Speedway. It’s also the 31st win of his career.

“It’s a big day. It’s an important day in our history,” Truex said of his victory coming on the 20th anniversary of the Sept. 11, 2001 terrorist attacks in the United States. “I think all of us here – yeah, we’re proud to win, and this car is amazing and there’s so many people to thank.

“But what a day to win on. It reminds you of the honor and the privilege it is to get to come out here and do this. All these great fans that come out here, we couldn’t do any of these kind of things without the men and women that take care of us and all the first responders, police officers, firefighters, the military, you name it.”

Asked about the effect his penalty to start the race, Truex said, “That was frustrating; I’m not going to lie. But I knew we’d have a good enough car to overcome it. It felt pretty good the first couple laps.

“Just one of those things; you’ve got to put it out of your mind and you’ve got to go race, and we knew there was a lot on the line tonight. Very happy to get to do this and go to Bristol without any worries next week is always fun.”

Christopher Bell finished third to complete a 1-2-3 sweep by JGR, Chase Elliott was fourth and Joey Logano rounded out the top-five.

Following the break between Stages 2 and 3, the lead-lap cars all pit with Hamlin the first off pit road. Chastain was penalized for speeding during his stop and had to restart from the rear of the field.

On the restart on Lap 245, Hamlin was followed by Truex, Kyle Busch and Larson, who clinched a spot in the Round of 12 of the playoffs based on his stage points earned already in the race.

Bubba Wallace wrecked in Turn 1 on Lap 250 to bring out the caution. The lead-lap cars remained on the track and Hamlin continued to lead the way when the race returned to green on Lap 255.

Truex finally got around Hamlin on Lap 269 to take the lead for just the second time in the race. Hamlin dropped to second while Bell ran third.

On Lap 293, another round of green-flag pit stops got underway with Harvick among the first to hit pit road.

Michael McDowell was penalized for speeding on pit road and had to serve a pass-through penalty and received another speeding penalty while serving his penalty.

Once the cycle of stops was complete, Chastain emerged as the leader on Lap 302 while Kyle Busch ran second and Truex third.

On Lap 306, Kyle Busch got around Chastain to take the lead for the first time in the race.

With 75 to go, Kyle Busch held a 2-second advantage over Truex as Hamlin ran third and Elliott moved into fourth.

On Lap 345, Chastain kicked off a final round of green-flag pit stops to take fresh tires and make up speed on the track.

Kyle Busch was penalized during his stop for speeding on pit road and had to serve a pass-through penalty.

Once the cycle of stops was completed, Truex moved into the lead on Lap 350.

Following the break between Stages 1 and 2, all lead-lap cars pit with Hamlin the first off pit road.

On the restart on Lap 89, Hamlin was followed by Elliott, Logano and Larson.

Elliott got around Hamlin on Lap 91 to take the lead for the first time in the race.

On Lap 131, a round of green-flag pit stops began as teams got new tires and fuel to make it to the finish of the stage.

Once the cycle of stops was completed on Lap 138, Hamlin had returned to the lead with Elliott in second, Chastain third and Logano fourth.

Elliott went three-wide with Hamlin and Suarez on Lap 162 and came out with the lead.

On Lap 178, Hamlin ran down Elliott and passed him back for the lead, only to drop to pit road two laps later as a second round of green-flag pit stops was underway.

When Elliott made his stop, he came in long in his pit stop but did not go over the line. Elliott, however, backed up, which tore up the jack that had already been placed in his car. The long stop put Elliott far back in the field when he returned to the track.

Hamlin cycled back to the lead on Lap 187 with Kyle Busch in second and Truex third. Elliott ran 15th.

With 30 laps remaining in the stage, Hamlin had built up a 2.5-second lead over Kyle Busch as Truex ran third, 3.6 seconds behind the leader.

On Lap 216, Hamlin put Elliott one lap down and leaving 14 cars on the lead lap.

With 10 laps to go, Kyle Busch had closed to within 1.3 seconds of Hamlin as Truex remained third.

With four laps remaining, Hamlin put Byron a lap down, leaving 12 cars on the lead lap.

Hamlin led 76 of 80 laps on his way to a dominating Stage 1 victory over Elliott, who edged Logano for second on the final lap.

Larson was fourth and Blaney rounded out the top-five.

Truex started in the pole position and appeared to lead the first lap but was penalized for jumping the start, which handed the lead over to Hamlin.

Truex had to serve a pass-through penalty and came out in 37th.

NASCAR displayed a competition caution on Lap 31 to allow teams to check tire wear. All lead-lap cars elected to pit with Kurt Busch the first off pit road. Kyle Busch was penalized for equipment interference and had to restart from the rear of the field.

On the restart on Lap 37, Kurt Busch was followed by Hamlin, Logano, Harvick and Blaney.

Hamlin quickly regained the lead on the restart.

On Lap 41, Kurt Busch’s left-rear tire went down, which sent him around and hard into the wall to bring out a caution and caused an early-end to his race.

Most of the lead-lap cars remained on the track and Hamlin led the way on the restart on Lap 48.

With 25 laps remaining in the first stage, Hamlin had built up a 1.2-second lead over Blaney while Logano ran third.

With 10 laps to go, Hamlin remained out front but Logano had moved to second and Elliott was closing fast in third.

Larson and Cole Custer both had to restart the race from the rear of the field after their respective cars failed pre-race inspection multiple times.