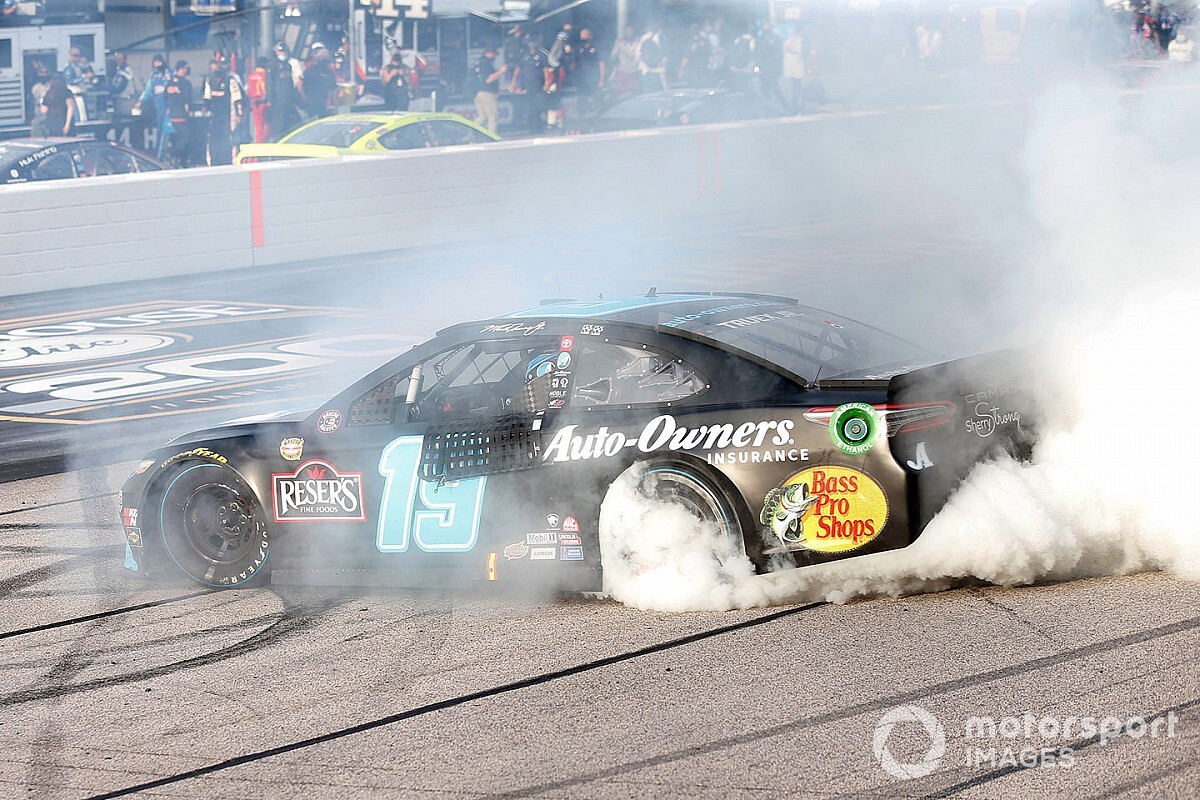 Truex completed dominated Sunday’s Goodyear 400 at Darlington (S.C.) Raceway, leading a race-high 248 of 293 laps and cruised to a 2.571-second lead over Kyle Larson to secure his third series victory of the season.

No other driver has won more than once through 12 races.

The biggest challenge to Truex came following the final round of green-flag pit stops as Larson was able to close the gap on the leader to under several times in the final 20 laps.

At one point, Larson went three-wide and split two cars to continue his chase of Truex but in the final laps, Larson’s tires began to wear out and he lost ground.

The win is the 30th of Truex’s career and second at Darlington, the previous victory coming in the 2016 season.

“We’ve won a bunch of stages here in the past couple of years, lady luck just had us here,” Truex said. “Really proud of everybody at Joe Gibbs Racing, a throwback (paint scheme) to Furniture Row … this one’s for Furniture Row, pretty cool.

“We just had good balance, the car would do what I wanted it to do. It was really loose that last run and I was nervous with (Larson) catching us and we got mired in traffic. That’s always tough.”

Larson said he was surprised that he was able to close in on Truex late in the race.

“I caught him, I closed on pit road, was riding and actually had an opportunity to get by and thought I’d stay patient and he was better on the long run,” Larson said.

Following the break between Stages 2 and 3, the lead-lap cars all pit with Truex once again the first car off pit road. Austin Dillon was penalized during his stop for speeding on pit road and had to restart from the rear of the field.

The race returned to green on Lap 194 with Truex out front and followed by Kyle Busch, Hamlin, Byron and Larson.

On Lap 202, Erik Jones, who had just returned to the lead lap, slapped the wall and was forced to pit under green for repairs.

Another round of green-flag pit stops got underway on Lap 224 as Joey Logano and several others dropped down on pit road to take on new tires and fuel to make it to the finish of the race.

Anthony Alfredo was penalized by NASCAR for speeding on pit road during his stop and had to serve a pass-through penalty.

Once the cycle of stops was completed on Lap 233, Truex remained the lead with a 2.5-second advantage over Kyle Busch. Larson was third, Logano fourth and Hamlin fifth.

On Lap 241, Larson got around Kyle Busch to take over the second spot, 3.5 seconds behind Truex.

A final round of green-flag stops began on Lap 257 with teams wanting new tires to make it to the end of the race.

Logano was penalized by NASCAR for speeding on pit road and had to serve a pass-through penalty.

Once the cycle of stops was completed on Lap 259, Truex again remained in the lead, but his advantage over Larson had dropped to 1.9 seconds.

With 30 laps to go, Larson cut his deficit to under a second as Kyle Busch ran third.

Larson remained in the hunt for the win with 20 laps remaining, trailing Truex by just under a second as Kyle Busch ran third.

Truex absolutely dominated the second stage of the race, rolling to the Stage 2 win by nearly 15 seconds over Kyle Busch.

Byron was third, Hamlin fourth and Larson rounded out the top-five.

Following the break between Stages 1 and 2, the lead-lap cars all pit with Truex the first off pit road. Larson was penalized for speeding on pit road and was forced to restart from the rear of the field.

On the restart on Lap 98, Truex was followed by Hamlin, Tyler Reddick, Harvick and Logano.

On Lap 99, Cole Custer got hit by Anthony Alfredo coming off Turn 2 and slammed into the wall, damaging his No. 41 Ford beyond repair. Custer quickly became the second Stewart-Haas Racing car to wreck out of the race.

The race returned to green on Lap 105 with Truex still in command.

Following contact with Bubba Wallace, Kurt Busch slammed the frontstretch inside wall on Lap 107 and an oil fire briefly erupted underneath his No. 1 Chevrolet.

Several cars, including Truex, decided to pit and Christopher Bell was penalized during his stop for speeding on pit road and had to restart from the rear of the field. Hamlin remained on the track and led the way on the restart on Lap 115.

Truex, on the fresher tires, took only two turns following the restart to reclaim the lead.

On Lap 140, Alex Bowman was forced to pit under green for a flat tire.

With just over 40 laps remaining in the first stage, drivers again started a round of green-flag pit stops to take on new tires and fuel to make it to the finish.

Once the cycle of stops was completed on Lap 150, Truex was back out front and held a nearly 4-second lead over Byron with Kyle Busch in third.

With 30 laps to go in the second stage, Truex had pushed his lead over Byron to 5.3 seconds. Kyle Busch was third, Logano fourth and Hamlin rounded out the top-five.

After a difficult time navigating lapped traffic, Truex held off a fast-approaching Hamlin to take the Stage 1 win.

Reddick was third, Larson fourth and Harvick rounded out the top-five.

Brad Keselowski, who started on the pole, led the first four laps until Harvick dived below him to take the top spot on Lap 5.

Aric Almirola spun coming off Turn 2 after contact from Ricky Stenhouse Jr. on Lap 6 and pounded the backstretch wall to bring out the first caution. His No. 10 Ford was damaged beyond repair.

A handful of lead-lap cars pit but Harvick remained on the track and in the lead when the race returned to green on Lap 12.

Kyle Busch got around Harvick in Turn 3 on Lap 14 to take the lead for the first time.

On Lap 22, Kyle Busch appeared to tag the wall and spun as Truex got around him to take the lead. Busch took his No. 18 Toyota directly to pit road. NASCAR indicated this would serve as the competition caution.

All the lead-lap cars pit with Truex the first off pit road. On the restart on Lap 29, Truex was followed by Reddick and Harvick.

Halfway through the first stage, Truex had opened up a 2-second lead over Reddick with Hamlin in third and Harvick having dropped back to fourth.

On Lap 56, Hamlin moved into the second spot, more than 3.5 seconds behind Truex. Reddick dropped to third.

Harvick dropped to pit road on Lap 60, the first among the leaders to make a green-flag stop to get new tires.

Once the cycle of green-flag stops was completed on Lap 72, Truex remained the leader followed by Hamlin and Harvick.

With 10 laps to go in the first stage, Truex opened up a 2-second lead over Hamlin followed by Harvick and Reddick.

Both Almirola (multiple inspection failures) and Elliott (unapproved adjustments) had to start the race from the rear of the field.