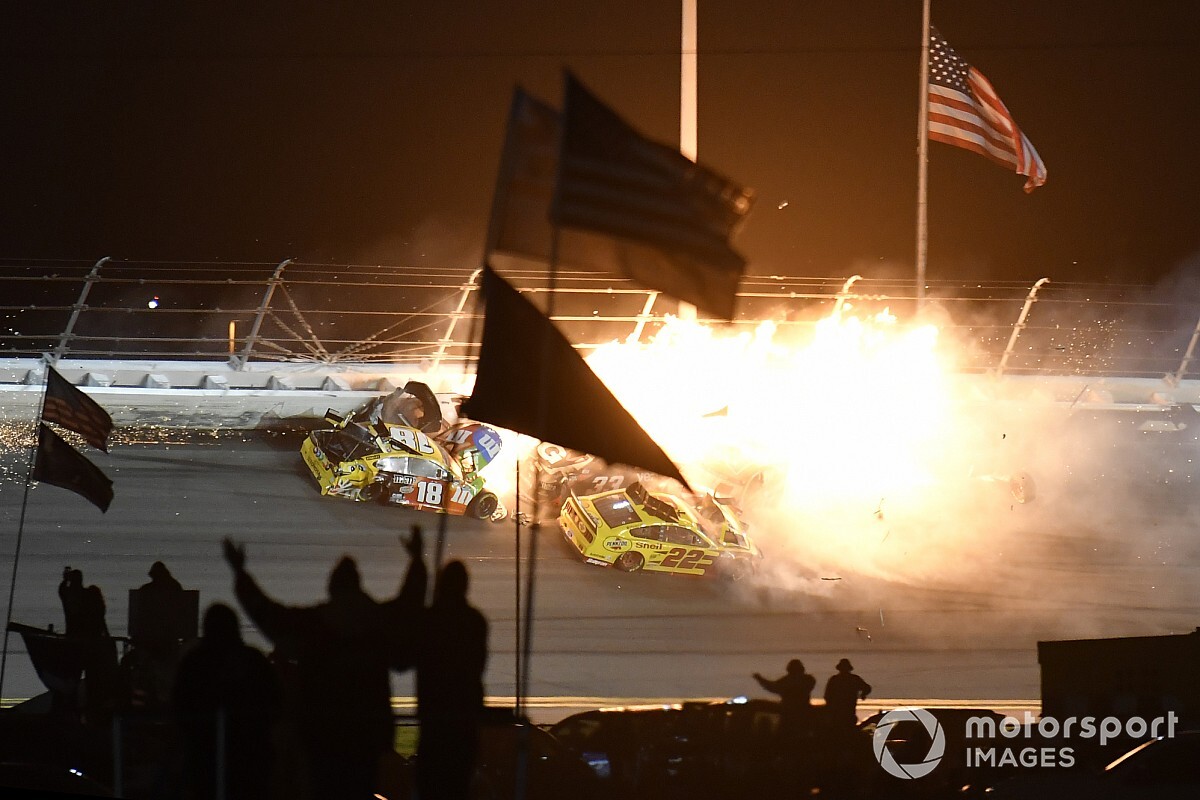 Instead, after dropping back to start a run and with a shove from behind by Michael McDowell, Brad Keselowski got into the left-rear of leader Joey Logano’s No. 22 Ford, which sent Logano spinning down the track and Keselowski racing up it and into the wall.

McDowell split the middle to inherit the lead and held off Chase Elliott before the caution was thrown, which secured McDowell’s first career win in the Cup Series’ biggest race.

Even reigning Xfinity Series champion and fellow Penkse driver Austin Cindric, running a partial Cup schedule this season and few positions behind Logano and Keselowski, couldn’t capitalize on the incident. He ended up collected in Keselowski’s wreck, as well.

With fellow teammate Ryan Blaney already out of the race from a previous incident, none of the four Penske cars completed all 200 laps.

“To me, the biggest heartbreak of this whole thing is that there are 400 people at Team Penske asking where their Daytona 500 bonus is and it’s up in a ball of flames up in Turn 3 right now,” Logano said Friday.

“That, to me, is probably the hardest part to deal with because those families put just as much into it as I do, and I learned this the most when we won the championship in 2018. That’s probably to me the most frustrating part and they should be frustrated too about it.

“I’m angry about it, so that part is probably what stings the most is that we had a really good shot at having a Penske 1-2 and, instead, we finished 12th and 13th.”

Logano said he had yet to talk to Keselowski about the last-lap incident but planned to before this Sunday’s race on the Daytona Road Course.

Logano compared his teammate relationship to that of a marriage and it wouldn’t be healthy to “just roll it up under a rug.”

“We may not have to agree on everything, but we at least have to find a way to move forward. And that is going to be the approach for me to do because going back to the 400 men and women that work at Team Penske, we owe to them to figure this out.

Nothing wrong with last-lap block

Logano insists he doesn’t believe anyone did anything wrong, but everyone has “a different perspective.”

He said McDowell even texted him this past week asking if Logano thought he did anything wrong at the end of the race.

Logano’s response? “Yeah, going for the win, I get it. He had three other cars bumper to bumper behind him because of the situation that was happening, so you can’t blame him for pushing.

“He was going to get pushed if he didn’t push, so it’s just part of the race.”