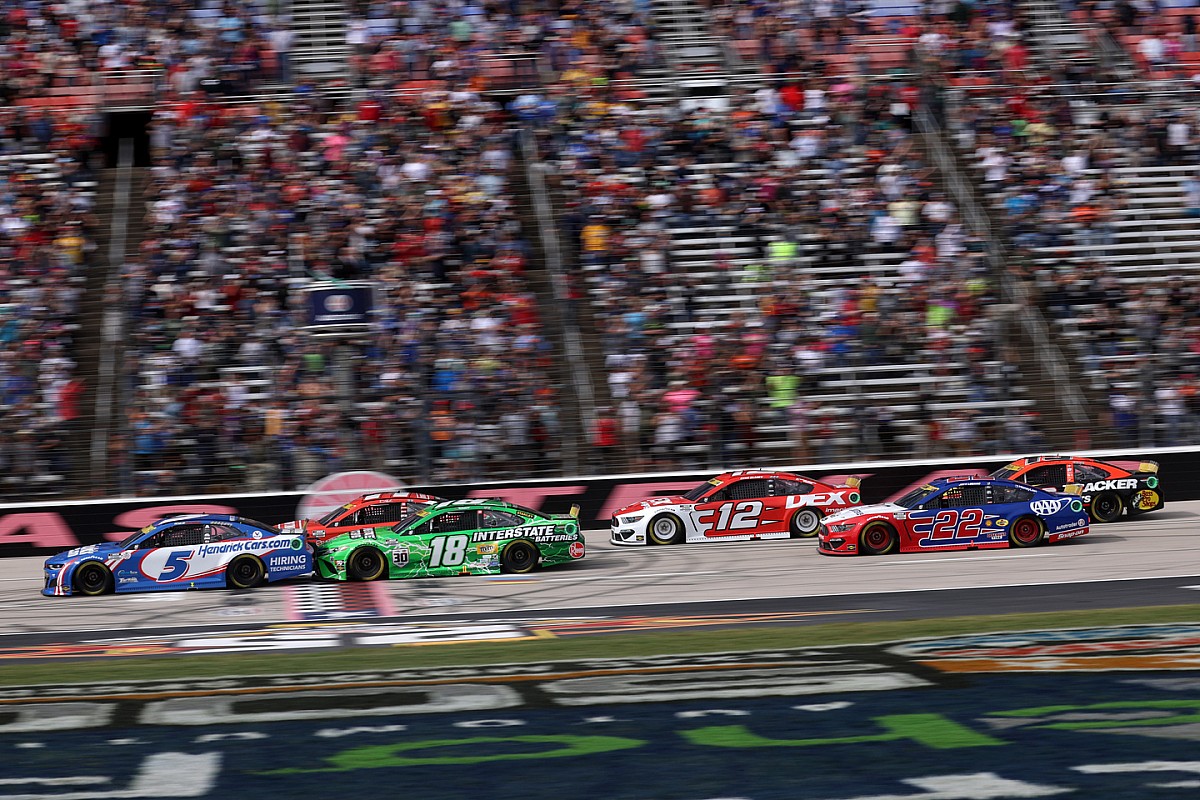 It started on Lap 300 of 334 when Joey Logano’s engine blew, immediately putting the No. 22 Team Penske Ford out of the race.

Logano finished 30th, now a distant 43 points back of the cut line.

“I thought it was starting to maybe give up a little bit of power in that run,” explained Logano. “We were just getting passed. Not really though. It just kind of let go. It is one of those days when nothing went right. The strategy didn’t go the way we wanted it to early in the race. Cautions didn’t fall the way we hoped they would and every time we started fighting our way back something happened and we ended up like this. Now we know what we have to do these next two weeks. We better go find a way to win.

“It was a grind. We had a good start of the race and rode it up there to second and then we put two tires on and the car got real loose and we lost track position that run. We started making gains and we had a caution that fell right after we pitted and put us down a lap at the wave around. That happened a couple of times. We came back from the rear three times throughout the race. I’d like to know how we would be if we just picked it up and put it in a top-three spot. Maybe we would be okay. We have to move on. It is what it is now. We can’t change it. Not many points today, so that is a bummer. We will be fighting from here.”

Just 15 laps later, trouble would find Denny Hamlin. The Joe Gibbs Racing driver was battling a tire rub after contact with Ryan Blaney as they battled three-wide for position. Not long after it started smoking, the tire let go and he went spinning down the backstretch, touching the inside wall.

Hamlin remained on the lead lap and was still in a position to grab a respectable finish. On the ensuing restart, his teammate Martin Truex Jr. was the next playoff driver to face misfortune. He lost control after contact from behind, slamming the outside wall and ending his day.

Truex finished 25th and is now 22 points below the cut line.

“I’m not sure,” said Truex when asked what happened. “I’ll have to see it. I was definitely running tight trying to get all we could and maybe I squeezed him (Daniel Suarez), maybe he came up, I’m not sure. I don’t even know if we touched. I got loose and when I gathered it up (shown replay). Yeah, we touched for sure. It’s really fast right there and yeah, hit the splitter and went straight to the fence. Tough spot to have contact like that. I don’t know. It is what it is.”

While Logano and Truex fell from the race, Hamlin soldiered on. However, trouble found him yet again in the final incident of the race as Chase Briscoe and Chris Buescher collided exiting Turn 2.

With front-end damage, Hamlin would somehow salvage an 11th-place finish. The effort kept him just above the elimination zone, nine points clear of the cut line.

“I think we went a different direction with our car and we weren’t just as fast as we were in previous mile-and-a-half races,” Hamlin said post-race. “I thought we were kind of a third-to-fourth place car on the long run, seventh-to-eighth on the short run. Just weren’t ourselves today in that case and then obviously getting in two wrecks at the end didn’t help, but the fact that there was a lot of attrition and the fact that the team did a phenomenal job fixing the car got us back up to P-11.”

Hamlin believes the Texas ‘insanity’ will follow the playoffs to Kansas, and they will have to be ready for chaotic restarts and more late-race carnage as the battle for the championship comes down to the wire.

“Hopefully we bring a fast piece there and we can go there and compete for a win,” he concluded.

Chase Elliott (-8pts) and Brad Keselowski (-15pts) also find themselves just below the cut line after the first of three races in the Round of 8.