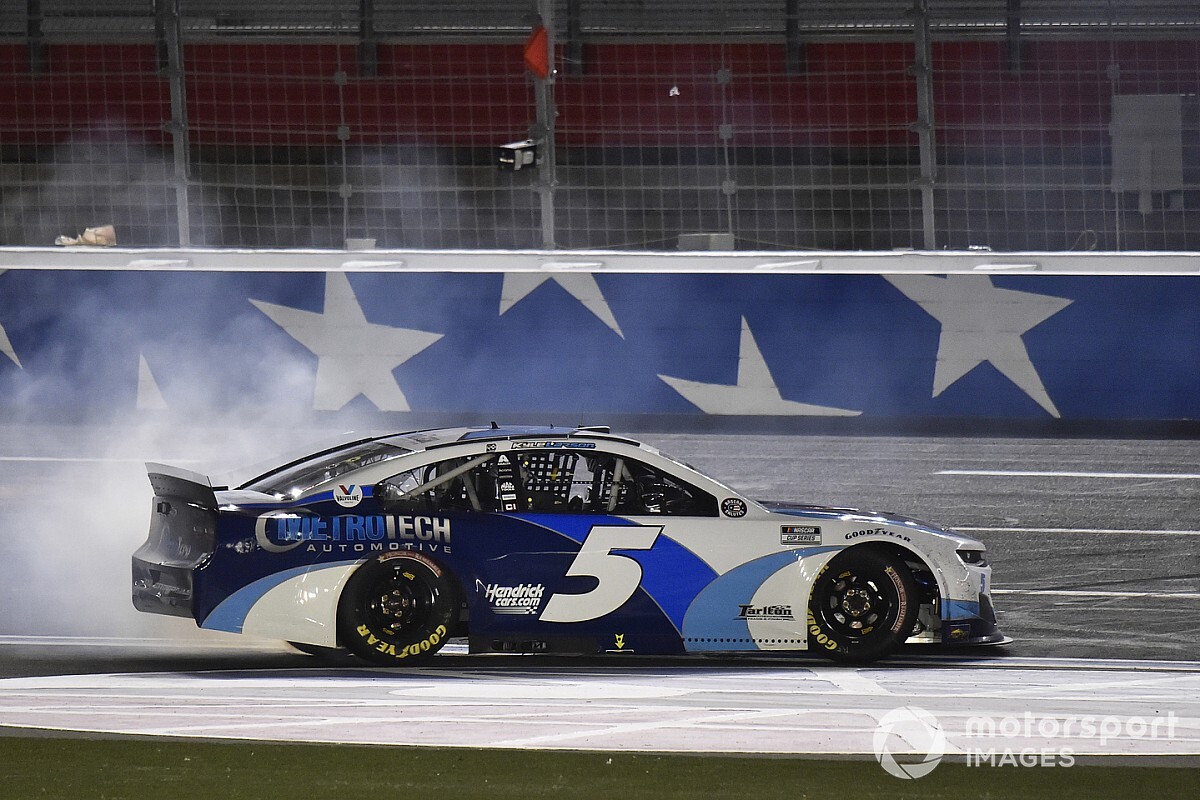 Larson started the weekend by winning the pole then quickly established the dominance of his No. 5 Chevrolet in Sunday night’s 600, taking three stage wins and cruising to a 10-second victory over his HMS teammate, Chase Elliott, at Charlotte Motor Speedway.

Larson’s only serious competition in the event were from his HMS teammates. Both Elliott and William Byron took brief turns in the lead, only to see Larson fight his way back to the front with this help of a fast and efficient pit crew.

“It feels so good. It wasn’t easy – I felt like I had to fight off William and Chase a lot,” Larson said. “It kind of worked out the last run as (Erik Jones) had to pit and pulled out in front of me and I just towed with him for a while and stretched my lead out.

“It’s awesome. It feels great to help Mr. H (team owner Rick Hendrick) break that record finally. This is so awesome. We haven’t seen this many fans in forever. Thank all you guys for coming out.

“Thanks to everybody who allows me to drive this No. 5 car. And thanks to my No. 5 team, too. They were great tonight. We had awesome pit stops that really allowed us to get the win tonight.”

With the win, HMS now owns 269 victories in the Cup Series – breaking the record of 268 previously held by Petty Enterprises. Petty has been the organization with the most Cup wins since 1960.

Elliott’s win last weekend at Circuit of the Americas allowed HMS to tie the record. Hendrick’s first Cup win came with Geoff Bodine, also driving the No. 5 in 1984.

“I am proud to congratulate Rick Hendrick and all of Hendrick Motorsports on breaking the all-time wins record for a NASCAR Cup Series race team, long held by the legendary Petty Enterprises team. With nearly 40 years of excellence, Hendrick Motorsports has set the gold standard for race team success. Rick Hendrick has already cemented his legacy as a NASCAR Hall of Famer, and now adds another incredible accomplishment to an exemplary NASCAR career.”

Asked to describe his experience with HMS so far this season, Larson said, “When I was talking to Ricky Stenhouse Jr. last year and told him I thought I was going to end up in one of the Hendrick cars, he said, ‘You’re going to do really, really good in that thing.’

“I didn’t know but it’s been better than I ever imagined.”

Kyle Busch ended up in third, Byron was fourth and his HMS teammate, Alex Bowman, rounded out the top-five.

Following the break between Stages 3 and 4, all the lead-lap cars pit with Larson again the first off pit road. Ryan Blaney was penalized by NASCAR for speeding on pit road and Bubba Wallace was penalized for equipment interference. Both had to restart the race from the rear of the field.

The race returned to green on Lap 307 with Larson out front followed by Kyle Busch, Byron and Elliott.

On Lap 321, Joey Logano was forced to pit under green for a flat tire. It was outside his pit window which meant he would need to pit again during the stage to make it to the finish on fuel.

With 60 laps to go, Larson had moved out to a 2.8-second lead over Elliott as Kyle Busch ran third, Byron fourth and Bowman fifth.

On Lap 340, Martin Truex Jr., who was running 12th, had a left-front tire go flat and immediately dove down to pit road and the race remained green. His crew had difficult time extracting the tire, which sent him several laps down and out of contention.

Numerous lead-lap cars hit pit road on Lap 345 to begin a final round of green-flag stops for new tires and fuel to make it to the finish of the race.

Larson cycled back to the lead on Lap 352. He was followed by Elliott, Byron, Kyle Busch and Bowman.

With 40 laps to go, Larson’s lead over Elliott remained steady at 2.1-seconds with Byron in third, 3.7 seconds behind the leader.

Larson’s lead had grown to 3.7 seconds over Elliott with 25 laps remaining in the race.

Kyle Busch powered around Byron and into the third spot with 10 laps to go. Larson’s lead over Elliott had expanded to more than a 9-second lead.

Larson claimed the Stage 3 win under caution after a late-stage wreck involving Ryan Newman on Lap 296.

Byron ended up second, Kyle Busch was third, Elliott fourth and Bowman rounded out the top-five.

Following the break between Stages 2 and 3, all the lead-lap cars pit with Larson the first off pit road. When the race returned to green on Lap 208, Larson was followed by Elliott, Byron and Kyle Busch.

On Lap 213, Christopher Bell hit the wall on the backstretch and did significant damage to his No. 20 Toyota. The race remained green, but Bell eventually had to pit for repairs.

After hounding him for several laps, Byron finally ran down and passed Larson on Lap 231 to take the lead for the second time in the race.

Harvick was the first to pit under green on Lap 238, partially to do with what he thought was a loose wheel. He was told he was “in his window” to make the stop.

By Lap 245, many of the rest of the lead-lap cars began making their green-flag stops, including Kyle Busch, who locked up his wheels entering pit road.

Once the cycle of stops was completed on Lap 253, Larson came out the leader followed by Byron, Kyle Busch, Elliott and Bowman.

With 20 laps to go in the stage, Larson maintained a 1.2-second lead over Byron as Kyle Busch ran third.

Byron closed to Larson’s rear bumper with 10 laps to go looking for an opportunity to reclaim the lead.

Newman got loose and hit the Turn 3 wall to bring out a caution on Lap 297. There wasn’t enough time to restart the race before the stage’s conclusion.

Larson passed Elliott with 15 laps to go and held on for the Stage 2 victory, his eighth stage win of the season.

Following the break between Stages 1 and 2, all the lead-lap cars pit with Larson the first off pit road. On the restart on Lap 108, Larson was followed by Elliott, Harvick and Byron.

With 75 laps remaining in the stage, Larson had closed to the rear bumper of Larson’s car, looking for an opportunity to take the lead.

On Lap 132, Elliott used a bold move and got around Larson on the outside to take the lead for the first time in the race.

On Lap 140, Kurt Busch dramatically slowed on the track, pulled down pit road and drove right to the garage with a likely engine issue.

Brad Keselowski was the first to hit pit road to start a round of green-flag stop to take on tires and fuel to make it to the finish of the stage.

Once the cycle of stops was completed on Lap 153, Larson had returned to the lead followed by Byron, Elliott and Harvick.

Just after returning from the garage after completing repairs, the engine let go on Kurt Busch’s No. 1 Chevrolet just as he got back up to speed, which brought out a caution.

All the lead-lap cars pit with Bowman the first off pit road thanks to a two-tire pit stop. On the restart on Lap 178, Bowman was followed by Hamlin and Logano (both of whom also took two tires) and Larson, the first car to take four new tires.

On Lap 180, Hamlin got around Bowman to take the lead for the first time as Elliott moved into third.

On Lap 183, Elliott worked his way around Hamlin to retake the lead as Larson moved into second.

Two laps later, Larson got side-by-side and then went around Elliott to reclaim the lead for himself.

Larson dominated the first stage, leading 89 of 100 laps, on his way to his seventh stage win of the 2021 season.

Larson started on the pole and led the way through the first 25 laps, building a 1.2-second lead over Elliott with Byron third.

On Lap 40, Elliott had closed to less than a half-second behind leader Larson.

Chastain was the first to hit pit road for a round of green-flag pit stop on Lap 46 to take on new tires and fuel to make it to the finish of the stage.

Blaney was forced to pit a second time on Lap 56 with a loose wheel on his No. 12 Ford.

Once the cycle of stops was completed on Lap 59, Larson continued to lead followed by Elliott, Byron, Harvick and Austin Dillon.

With 35 laps to go in the stage, Larson’s lead over Elliot had jumped to 1.529 seconds with Byron in third.

On Lap 95, Daniel Suarez suddenly slowed on the backstretch and was forced to pit under green for a right-front flat tire. Suarez returned to the track two laps down and in 29th.

Both Kurt Busch and B.J. McLeod both had to start the race from the rear of the field due to unapproved adjustments to their cars following qualifying.