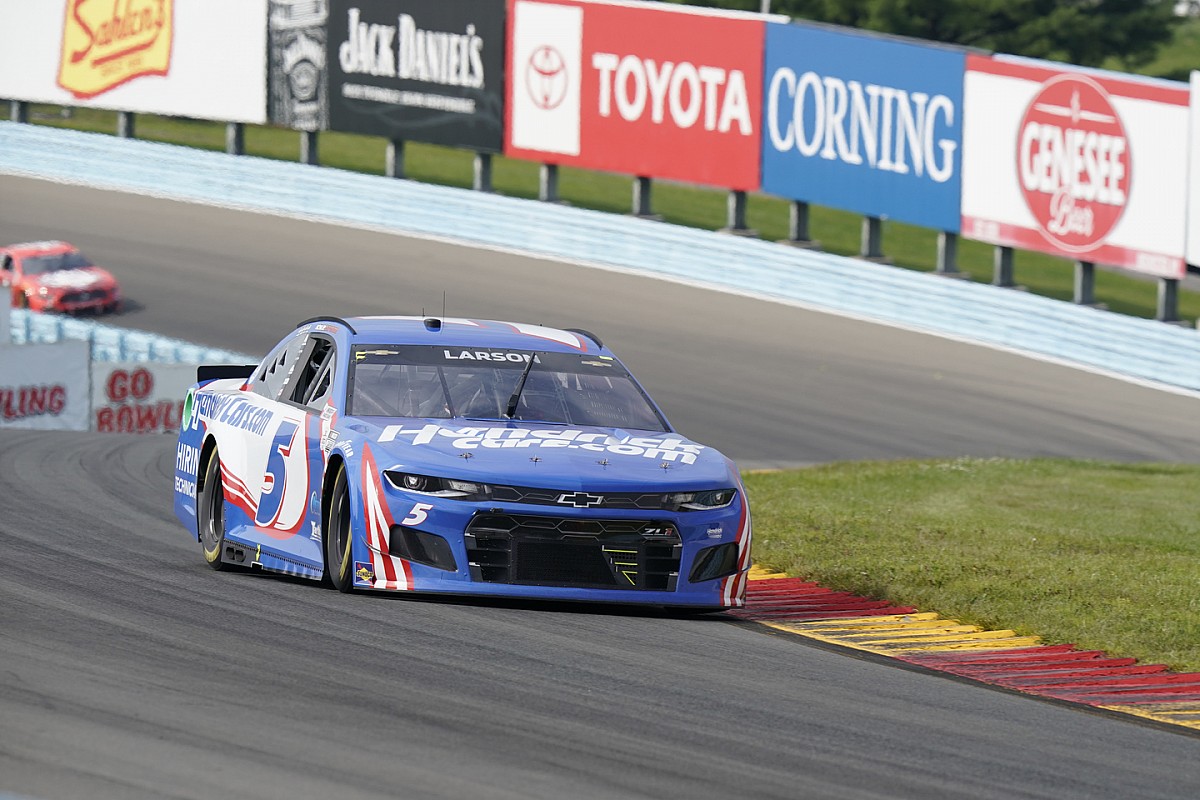 Larson got ahead of Martin Truex Jr. after the two made their final green-flag pit stop of Sunday’s race at Watkins Glen (N.Y.) International and moved out to a big lead.

But over the final 15 laps Larson’s Hendrick Motorsports teammate, Chase Elliott, began running down the leader. He passed Truex for second on Lap 82 of 90.

In the last three laps, Larson had to navigate a lot of lapped traffic in front him while keeping an eye on the approaching Elliott behind him. He took the white flag 2.8 seconds ahead of Elliott and took the checkered flag with a 2.4-second advantage.

The win left Larson in a tie with Denny Hamlin in the series points lead, but he would claim the regular season title – and the 15 playoff points that come with it – by tiebreaker (which is number of wins).

“Chase was already catching me pretty quick. When I caught those four (lapped) cars and got in to (Anthony Alfredo), I looked in my mirror and thought (Elliott) would be right on me but thankfully I had a comfortable-enough gap where I could make a mistake like that,” Larson said.

“I want to say big apology to Christopher Bell. I was inside but I wasn’t inside enough and I needed to have my nose a few feet further ahead and I ended up turning him. I race with him a lot. He’s probably the one guy I race with the most in all my racing. I hate I turned him like that – we’ve had incredible races together.

“Another amazing car. I knew from about Lap 3 after I stopped making a bunch of mistakes that we had a car that could win today.”

The win is the fifth this year for Larson – a career-best in a season – and the 11th win of his career.

“I hope we can keep racking these wins up,” Larson said.

Following the break between Stages 2 and 3, most of the lead-lap cars remained on the track and Truex led the way on the restart on Lap 44.

On Lap 54, Erik Jones spun around in Turn 5 but was able to restart and continue on without a caution.

Entering Turn 1 on Lap 55, Bell got side-by-side with Larson, the two made brief contact and Bell went spinning around. He was also able to continue without a caution.

On Lap 57, both Truex and Larson elected to pit under green to take new tires and fuel to make it to the end of the race. That handed the lead over to Hamlin. Larson beat Truex off pit road for position.

With 30 laps remaining in the race, Hamlin led Kurt Busch by over 8 seconds but both drivers still needed to make a final pit stop for fuel. Larson was the first car good to go until the end and was in seventh.

Hamlin pit on Lap 63, turning the lead over to Kurt Busch as Larson moved up to second and Truex third.

Kurt Busch pit on Lap 65, moving Larson into the lead for the second time in the race.

With 25 laps to go, Larson held a 1-second lead over Truex with Corey LaJoie third (who still needed to pit), Kyle Busch fourth and Elliott in fifth.

With 15 laps remaining, Larson remained 3 seconds ahead of Truex but Elliott had cut his deficit to 6.5 seconds behind the leader.

On Lap 82, Elliott easily powered around Truex entering the inner loop to move into the runner-up spot, 4.9 seconds behind leader Larson.

With three laps remaining, Larson encountered a bunch of lapped traffic, which allowed Elliott to close even more.

Larson’s lead was 2.8 seconds when he took the white flag to signal the final lap.

Truex led every green flag lap on his way to the Stage 2 win, topping Bell by 3.6 seconds.

Harvick was third, Larson fourth and Briscoe rounded out the top-five.

Following the break between Stages 1 and 2, several of the lead lap cars pit but Ricky Stenhouse Jr. stayed out and inherited the lead. Kurt Busch was first off pit road among those who pit.

On the restart on Lap 23, Stenhouse was followed by Truex and Briscoe.

Truex, Stenhouse and Briscoe went three-wide with Truex coming away with the lead on the exit of Turn 1 on the restart.

NASCAR displayed a caution on Lap 25 when James Davison’s car ended up stopped on the track. A handful of cars pit but Truex stayed out and remained in the lead when the race returned to green on Lap 28.

Harvick moved into second behind Truex as the field made its way through Turn 1 on the restart.

Elliott was forced to pit under green on Lap 30 after locking up his brakes and flat-spotting his tires.

With five laps remaining in the second stage, Truex opened up a 2-second lead over Bell as Harvick ran third, Briscoe fourth and Matt DiBenedetto fifth.

Joey Logano held off a furious charge from Larson to take the Stage 1 victory.

Hamlin was third, Reddick fourth and Byron rounded out the top-five.

Brad Keselowski started on the pole and the led the first nine laps until he spun out while leading in Turn 6.

Logano inherited the lead and NASCAR displayed a planned competition caution on Lap 11 to allow teams to check tire wear.

Several teams elected to pit but Logano remained on the track and in the lead when the race returned to green on Lap 13.

With five laps remaining in the first stage, Logano was desperately trying to fend off a challenge for the lead from Larson as Truex ran in third.

Both Elliott and Bell had to start from the rear of the field after their respective cars failed pre-race inspection multiple times. Both teams were assessed L1 penalties and their crew chiefs were ejected from the track.