Kyle Larson: “I gave everything I had” to catch Hamlin 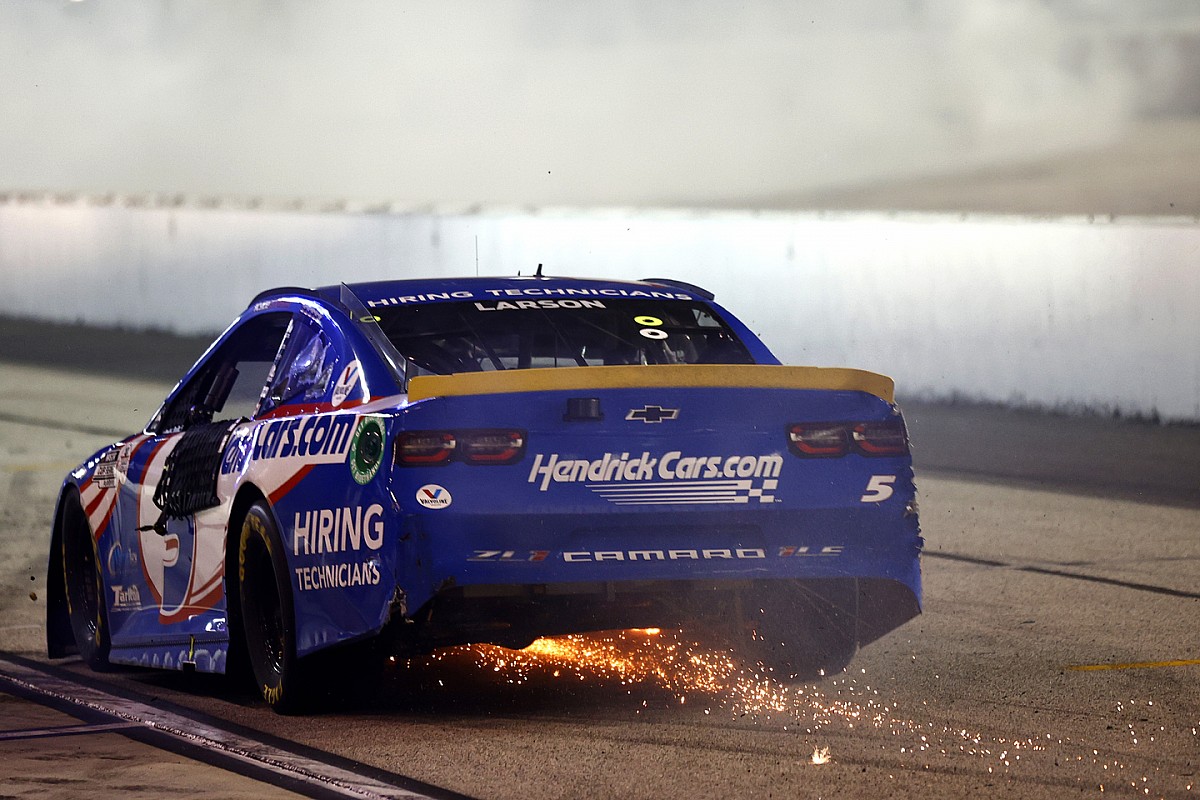 It was daring and desperate and it nearly worked.

Larson had been unable to gain much ground on leader Denny Hamlin in the final laps of the Southern 500 but he decided to make a bold move.

Larson drove his No. 5 Chevrolet deep into the Turn 3 corner and into the wall in an effort to get to Hamlin’s rear bumper. He got there by Turn 4 but the damage to his car was too much and his momentum slipped coming to the checkered flag and he still finished second.

“We got to the white (flag), and I was like, well, I haven’t been able to gain on him now, I’m going to try something. Honestly got to his bumper too quick,” Larson said. “I was hoping he was going to run that diamond to kind of be safe and I could skirt to his outside but (I) gave everything I had.

“I didn’t want to wreck him, I just wanted to try to get to his outside there, but he did a great job not really making any mistakes during the last run, and I was having to push really hard in second to try and just stay with him.”

The Cup Series playoff opener had been a back-and-forth battle between Hamlin and Larson most of the night up front. Larson led 156 of the 367 laps, while Hamlin led 146, including the final 69.

Numerous playoff contenders ran into problems during the race but both Hamlin and Larson had remained mistake-free.

A late-race caution for an accident involving Chase Elliott gave Larson an opportunity on a restart on Lap 332 but Hamlin quickly pulled away.

“I was hoping we’d catch some sort of traffic, but we never really did,” Larson said. “Our Chevy was really good out front, just in traffic I would get stuck. Like in traffic I just got stuck really bad.

“Then there at the end losing control of the race really hurt us, but all-in-all a great day, good points day. Pit crew did great. Cliff (Daniels, crew chief) made some good changes in the car, so try again next week.”

The win sends Hamlin into the Round of 12 but Larson retains the series points lead by 34 over Hamlin.

“It’s good to get a good start. I think everybody’s, you know, nervous getting ready for the final 10 (races) and just the anticipation of how it’s going to go,” Larson said. “So good to get a good first week in and build some momentum and some confidence within the team.”