Kyle Larson and Hendrick continue to dominate with Sonoma win 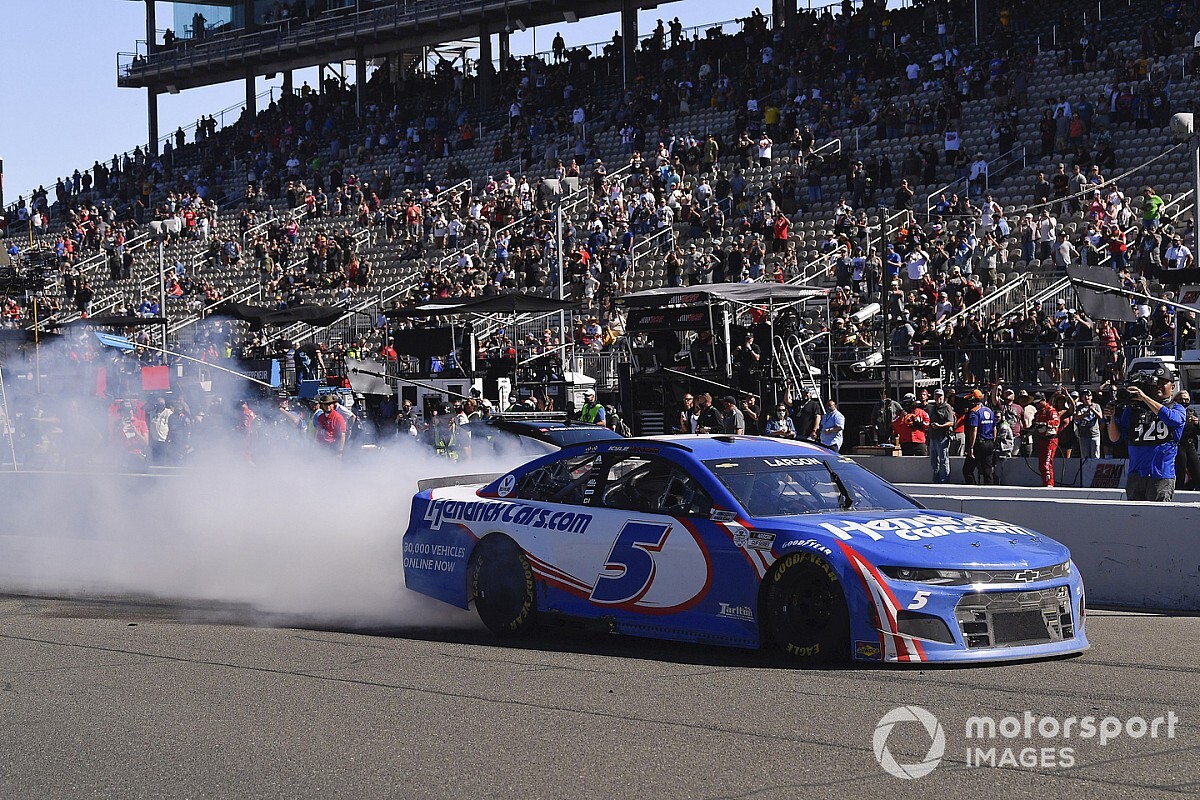 While Larson needed to hold off his Hendrick Motorsports teammate, Chase Elliott, in a two-lap overtime to secure the win in the Toyota/SaveMart 350 at Sonoma (Calif.) Raceway, his victory never seemed seriously challenged.

Larson started on the pole, won both stages and led 57 of the 92 laps. A late-race three-car wreck set up an overtime, but after Elliott got close in the first three turns, Larson was able to pull away and stay comfortably out front.

The win is Larson’s third of the 2021 season and second consecutive – he won all three stages and the race last weekend at Charlotte Motor Speedway.

“Our car was awesome all day, made my job a lot easier than it has some days in the past,” Larson said. “The tires, when they’d get hot and cycle cool under yellow, I lost some front grip. I kind of missed my apexes in a few corners so Chase stayed on me longer than I wanted him to but I was able to get away for the last lap.

“It’s just a lot of hard work (from Hendrick Motorsports). It’s been putting in for a long time now. A few years ago, for their standards, they were struggling. They dug down deep and we continue to work hard, too.

“I hope this is just the beginning of a lot more wins now.”

Larson’s crew chief, Cliff Daniels, said the No. 5 team waivered from their strategy despite the rash of cautions in the final stage.

“We stuck to our strategy at the beginning of the race. The only thing we did different was not short (pitting) Stage 2,” he said. “We had a fast enough car we felt we could pass back up through there if we got Stage 2 points.

“It paid off, which was great, definitely glad it did.”

“We were solid, just needed a little bit,” Elliott said. “I felt like through the rights I could get through pretty good but struggled through the lefts more than I should.”

Martin Truex Jr. – who had won the last two races at Sonoma prior to the COVID-19 pandemic – finished third, Joey Logano was fourth and Kyle Busch rounded out the top-five.

Following the break between Stages 2 and 3, several lead-lap cars pit but Kurt Busch remained on the track and inherited the lead. Larson was the first off pit road among those who pit.

When the race resumed on Lap 45, Kurt Busch was followed by Elliott, William Byron, Kyle Busch and Brad Keselowski. Larson lined up 21st.

Elliott got around Kurt Busch in the final turn of the restart lap to take the lead for the first time in the race.

Kyle Busch got around his brother, Kurt, in Turn 11 to move into second on Lap 48 as Elliott continued to lead.

On Lap 53, Larson made his way to second, 4.3-seconds behind leader Elliott.

Several teams kicked off a round of green-flag pit stops on Lap 54 to take on new tires and fuel to make it to the finish of the race.

Larson successfully made a cross-over move on Elliott in Turn 7 on Lap 58 to reclaim the lead.

Elliott hit pit road for his final green-flag pit stop on Lap 63. Truex made his final stop on Lap 64. Larson did his on Lap 65 as Logano took over the lead.

With 25 laps to go, Logano remained out front while Larson ran sixth and Elliott seventh.

On Lap 67, Kyle Busch got around Logano to take the lead for the first time in the race as Larson moved back into the top-five. Larson moved into second on Lap 68.

With 22 laps remaining, Larson went to the inside and got around Kyle Busch to reclaim the lead in the race.

On Lap 71, Quin Houff ran off course and stalled on the track to bring out a caution. Keselowski, who had pit just before pit road close, was penalized for having a crew member of the wall too soon and had to restart from the rear of the field.

Most of the lead-lap cars pit but Logano stayed on the track and inherited the lead. Larson was the first off pit road among those who pit.

The race returned to green on Lap 75 with Logano out front followed by Tyler Reddick, Corey LaJoie, Anthony Alfredo and Larson.

After one lap, Larson had made his way up to second, less than a second behind Logano.

With 15 laps remaining, Larson passed Logano to move back into the lead.

On Lap 77, LaJoie got into Ross Chastain which left LaJoie stopped in the middle of Turn 11 and facing the wrong way.

Several other drivers were forced to check up and wrecked, including Kevin Harvick, Byron, Alex Bowman, Erik Jones and Christopher Bell.

“I didn’t see much. I was behind (Harvick) and tried to roll the outside of (Jones), (Harvick) checked and up and there was nowhere to go,” Byron said.

The race returned to green with 11 laps to go and Larson leading the way.

Elliott moved into second, 1.7-seconds behind Larson with 10 laps remaining.

On Lap 86, Ryan Preece went off course and when he returned to the track, it was right in front of the ongoing car of Cody Ware. The two collided with Ware ended up stuck in the tire barrier to bring out a caution.

Only a handful of cars pit and on the restart on Lap 87, Larson was followed by Elliott, Truex, Logano and Kyle Busch.

Bowman, Alfredo and Bell all wrecked in Turn 4 which left Alfredo’s No. 38 Ford stalled in the middle of the track and brought out the eighth caution of the race.

The incident sent the race into overtime with Larson in the lead followed by Elliott, Truex, Logano and Kyle Busch.

Larson maintained his domination, cruising to the Stage 2 win over Logano by 6.1 seconds.

Bowman was third, Kurt Busch fourth and Elliott rounded out the top-five.

Following the break between Stages 1 and 2, Most lead-lap cars pit but Kurt Busch remained on the track and inherited the lead. Larson was the first off pit road among those who pit.

When the race returned to green on Lap 25, Kurt Busch led the way followed by DiBenedetto and Keselowski. Larson lined up 15th.

On Lap 28, Byron got around Kurt Busch and took over the lead. Larson had made his way back to sixth and Elliott seventh.

With 10 laps remaining in the second stage, Larson has powered into the second spot, 3.5-seconds behind leader Byron. Kurt Busch ran third.

On Lap 32, Ricky Stenhouse Jr. slammed into the barriers near Turn 1 to bring out a caution. Stenhouse’s No. 47 received significant damage, as did the barrier, which required repairs by the track crew.

Most of the lead-lap cars pit but Larson stayed out to retake the lead. Kurt Busch was first off pit road among those who pit.

On the restart on Lap 35, Larson was followed by Truex and Chastain. Kurt Busch lined up 19th.

With five laps remaining in the stage, Larson held a 1.6-second lead over Truex with Logano now in third.

Bubba Wallace developed a flat tire with three laps to go in the stage and tried to limp his No. 23 Toyota around the track and back to pit road.

Larson easily held off his teammate Elliott by more than 3 seconds to claim the Stage 1 victory, his 10th stage win of the 2021 season.

Kyle Busch was third, Truex fourth and Bowman rounded out the top-five.

Larson, who started on the pole, took command of the race early, building up a 4-second lead over Elliott after four laps.

Bell was forced to pit under green on Lap 4 as his No. 20 Toyota was registering no fuel pressure.

On Lap 10, several drivers – including Larson – elected to make green-flag stops for new tires but were not allowed to take fuel since the competition caution had not been completed.

NASCAR displayed a competition caution on Lap 12 to allow teams to check tire wear. The remainder of the field pit under the caution but Larson remained on the track and inherited the lead back.

The race returned to green on Lap 14 with Larson out front, followed by Elliott, Byron, Kyle Busch and Blaney.

With five laps to go in the stage, Larson held a 1.9-second lead over Elliott as Kyle Busch moved into third.

With three to go, Wallace elected to pit but was penalized for speeding on pit road and had to serve a drive-through penalty.

Daniel Suarez was also penalized for pitting after pit road was closed prior to the stage break.

Prior to the start of the race, the No. 38 Front Row Racing Ford team was penalized for an inspection violation.

Alfredo had to start the race from the rear of the field and the team’s crew chief, Seth Barbour, was ejected from the track.