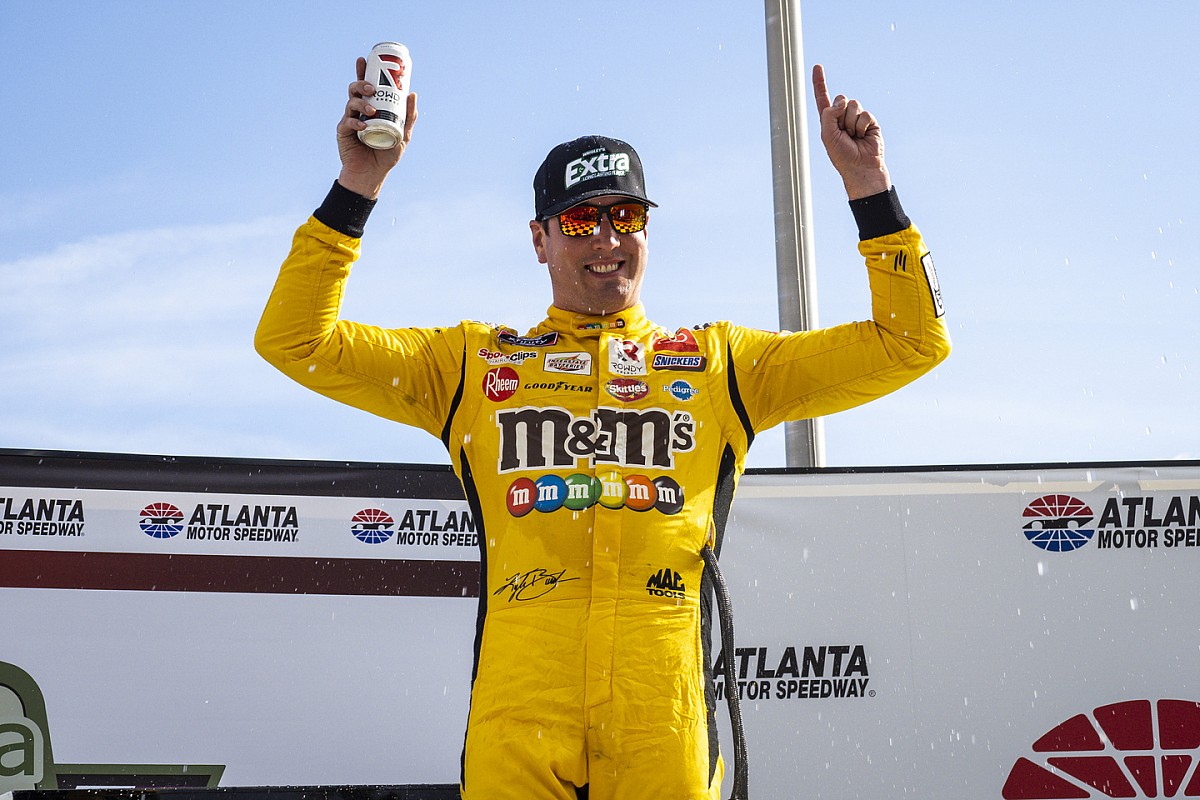 Busch held off a wild charge from Jeb Burton on the restart of a two-lap overtime but held on to win Saturday’s race at Atlanta Motor Speedway, winning all five of his series starts this season and claiming his 102nd career win.

The race is likely the last for Busch in the series, who said he would step away from the series after he hit win No. 100, which he did earlier this season. Saturday was the last of his scheduled five races for 2021.

Busch tried to push Hemric – who was the leader at the time – on the restart with six of 164 laps remaining. Instead, Busch turned Hemric’s No. 18 Toyota into the wall to bring out the caution that sent the race into overtime. Hemric is now winless in 105 career starts.

“I was trying to push him forward and he got squirrely and sideways and wrecked. I hate that for Daniel and his guys, they work so hard,” Busch said. “It didn’t work out for him but it worked out for us today and we’ll try to win again tomorrow.

“It’s been a fun ride. Thanks to everybody at Joe Gibbs Racing and all our sponsors over the years … It truly ended up being the ‘Busch Series’, which was pretty cool. But it’s kind of a somber day, a somber win. Hate (Hemric) got wrecked there.”

Asked winning all five series races he entered this year, Busch said, “Overall, a great accolade. I think I’ve led 20,000 laps in the series. I just want to thank Rowdy Nation, who’s been pulling for me.

“You’ll have to do something different on Saturdays and not watch Xfinity just focus on Cup.”

Following the break between Stages 2 and 3, the lead-lap cars all pit with Busch the first off pit road.

Harrison Burton had to pit twice to fix loose lug nuts and A.J. Allmendinger was penalized for speeding on pit road and had to restart from the rear of the field.

When the race returned to green on Lap 87, Busch was followed by Gragson, Hemric and Moffitt.

On Lap 96, Gray Gaulding slammed the wall off Turn 2 which brought out the sixth caution of the race.

Several drivers, including Busch, elected to pit but Gragson remained on the track and inherited the lead. On the restart on Lap 102, Gragson was followed by Allgaier, Haley, Clements and Jeb Burton. Busch lined up 13th.

Just before the green-flag, Gragson dove down to pit road with a punctured left-rear tire, which turned the lead over to Allgaier.

On Lap 105, Hemric – who had pit for new tires – went to the outside of Allgaier and grabbed the lead for the first time.

With 50 laps remaining, Hemric held about a 1-second lead over Busch as Allmendinger had worked his way back to third.

While running 10th, Brandon Jones hit the wall on Turn 3 on Lap 119 to bring out the seventh caution of the race.

Several lead-lap cars elected to pit including Hemric and Busch, but Ty Dillon remained on the track and inherited the lead. Hemric was the first driver off pit road among those who pit.

Allgaier had to restart from the rear of the field for driving over the choose box while choosing lanes before the start.

Hemric, on new tires, quickly powered back to the lead on the restart.

On Lap 147, Carson Ware spun off Turn 2 and came to stop on the track, which brought out a caution.

Most of the lead-lap cars pit with Hemric the first off pit road. On the restart on Lap 153, Kyle Weatherman stayed out and led the way. He was followed by Hemric, Busch, Allmendinger, Austin Dillon and Moffitt – all of whom had only scuff tires to use.

Haley (seventh), Allgaier (eighth) and Gragson (11th) all still had a new set of tires left to use.

Shortly after the restart, Weatherman fell back quickly on old tires and got hit by Harrison Burton to immediately bring the caution back out.

The race returned to green with six laps to go with Hemric out front followed by Busch, Allmendinger, Moffitt and Allgaier.

Busch attempted to give Hemric a push on the restart but instead ended up turning him and sent the No. 18 Toyota up and into the wall, bringing an end to his chase for his first series victory.

The race went into a two-lap overtime with Busch the leader followed by Moffitt, Jeb Burton, Haley and Allmendinger.

Gragson was third, Allgaier fourth and Hemric rounded out the top-five.

Following the break between Stages 1 and 2, all the lead-lap cars pit with Harrison Burton the first off pit road.

On the restart on Lap 47, Harrison Burton was followed by Hemric, Allmendinger, Gragson and Busch.

Gragson, who started on the outside, got a run around the outside and moved into the lead entering Turn 3.

On Lap 49, Busch went to the outside of Gragson and cleared him to return to the lead.

David Starr hit the wall on the frontstretch on Lap 51 after contact with Matt Mills to bring out a caution.

The race returned to green on Lap 56 with Busch still out front.

With 20 laps to go in the stage, Busch held about a half-second lead over Gragson with Harrison Burton in third.

On Lap 63, Josh Berry spun off Turn 4 to bring out a caution but didn’t hit the wall. The race went green on Lap 67 with Busch the leader.

Allmendinger went toe-to-toe with Busch on the restart but Busch was finally able to clear for the lead.

With five laps remaining, Busch had opened up a 1-second lead over Allmendinger with Gragson in third.

Busch dominated the first stage, leading all 40 laps and easily holding off Allmendinger for the Stage 1 win.

Harrison Burton was third, Hemric fourth and Gragson rounded out the top-five. Austin Dillon, who started from the rear of the field, made his way to 10th at the break.

Busch started on the pole and remained in the lead until NASCAR displayed a competition caution on Lap 21 to allow teams to check tire wear.

Most lead-lap cars remained on the track. The race returned to green on Lap 25 with Busch still out front followed by Allmendinger and Harrison Burton.

With 10 laps remaining in the stage, Busch held about a half-second lead over Allmendinger as Harrison Burton ran third and Hemric fourth.

Austin Dillon was a last-minute substitute for Michael Annett in JR Motorsports’ No. 1 Chevrolet and thus had to start the race from the rear of the field.

Annett skipped a planned Truck race Friday night hoping a leg injury he suffered would be better in time for today’s Xfinity race but he was not able to go.