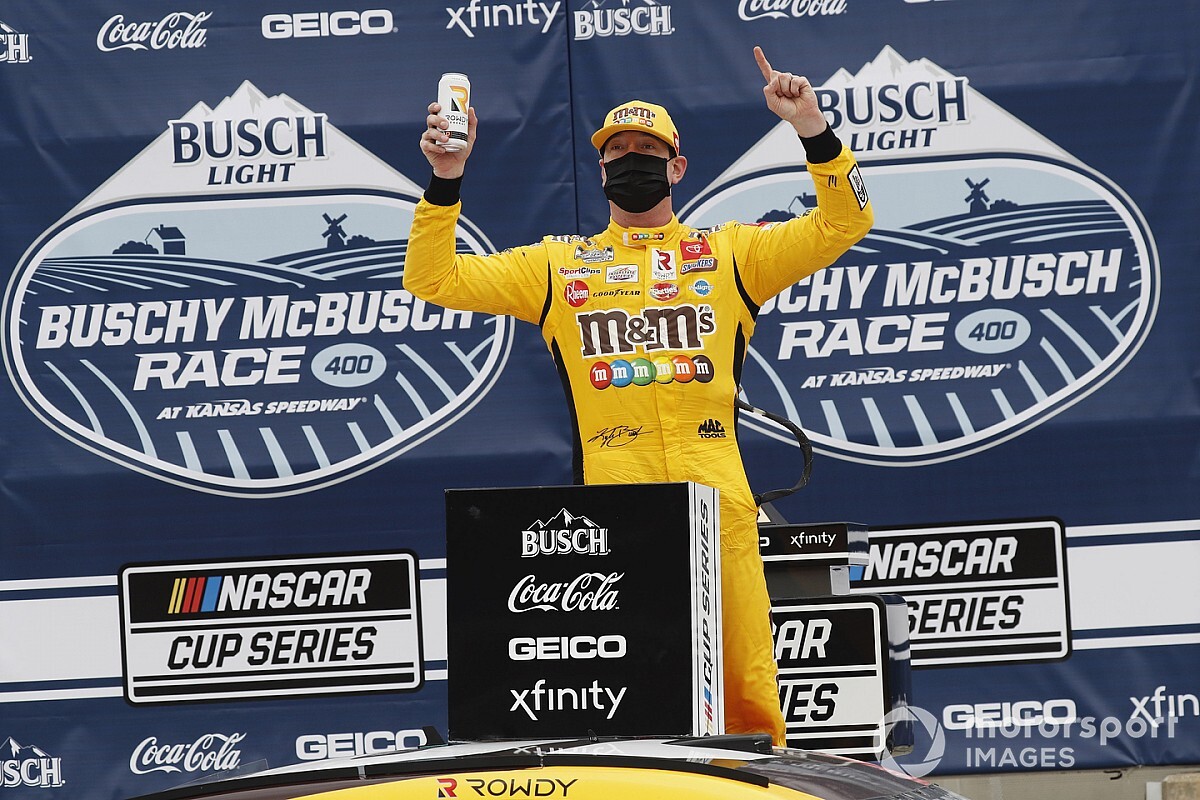 Busch, who celebrated his 36th birthday on Sunday, led the way on the final restart with two of 267 laps remaining. With the help of push from teammate Martin Truex Jr., Busch got clear of Ryan Blaney and Kyle Larson making contact on the restart.

The race remained green and Busch took the checkered flag at Kansas Speedway as Kevin Harvick rallied from a pit stop penalty to finish second.

“That’s a Kyle Busch win right there,” Busch said over his team radio as he crossed the finish line.

“You talk about ups and downs of racing – there’s been a lot of downs of life for us. I have a great opportunity and a great job, no doubt. But struggling with the infertility and stuff like that with Samantha (Busch’s wife),” Busch said. “Just a great day to be able to put this M&M’s Mix Camry up front. It’s cool to get everybody back to Victory Lane again this early in the season (and) to be able to get some of those points going our way now.

“When you go through the lows, you go through the disappointment, you go through the dejection and the non-understanding of just whether or not you can still do it. There’s a sense of doubt there for sure. You just have to keep persevering, keep digging and putting your focus forward to be able to come out here and win this thing. Thanks to all the fans here at Kansas Speedway, it’s awesome to have people back and you guys coming out and supporting us for what we can do with the rules right now.

“I have to thank my teammate, (Martin) Truex Jr. I just saw the replay and he was behind me, pushing me and gave me one hell of a run down the frontstretch to get me clear. That was the winning ticket for us.”

Busch is now the 10th different winner in 11 races this season and he is now ensured of his 17th straight season with at least one win (Richard Petty holds the all-time record with 18 seasons).

Following the break between Stages 2 and 3, the lead-lap cars all pit with Larson the first off pit road.

On the restart on Lap 168, Larson was followed by Kyle Busch, Denny Hamlin, Blaney and Keselowski.

Kyle Busch quickly powered to the inside of Larson and came away with the lead after the restart only to see Larson return the favor and reclaim the top spot on Lap 169.

With 75 laps to go, Larson held a 1.7-second lead over Hamlin as Kyle Busch ran third and Harvick fourth.

Several lead-lap cars hit pit road with 60 laps remaining to begin a final round of green-flag pit stops to pick up new tires and fuel to make it to the finish of the race.

Both Aric Almirola and Reddick were penalized for having uncontrolled tires during their stops and had to make pass-through penalties.

Once the cycle of stops was completed on Lap 226, Larson returned to the lead followed by Hamlin, Kyle Busch and Harvick.

NASCAR displayed a caution on Lap 231 to retrieve a loose tire from Reddick’s team that ended up in the infield grass.

The lead-lap cars all pit with Larson the first off pit road. During the stops, Harvick was penalized for an uncontrolled tire and had to restart the race from the rear of the field.

On the restart on Lap 237, Larson remained out front followed by Hamlin, Kyle Busch and Joey Logano (who took just two tires on his stop).

Hamlin muscled past Larson on the restart to take the lead for the first time in the race.

On Lap 243, Hamlin drifted up into the wall in Turn 4 as Larson regained the lead.

Hamlin ended up cutting a tire down and hit the Turn 2 wall which forced NASCAR to display a caution on Lap 246.

On the restart on Lap 250, Larson was followed by Kyle Busch, Blaney, Logano and Ross Chastain. DiBenedetto lined up seventh.

Ricky Stenhouse Jr. and Austin Cindric got together on Lap 253 on the backstretch while racing for 15th to bring out another caution.

When the race returned to green with 10 laps to go, Larson led followed by Kyle Busch, Keselowski, Blaney and Elliott.

Kyle Busch quickly moved into the lead on the restart and then Christopher Bell spun collecting Stenhouse and Ryan Preece in Turn 4 to bring the caution back out.

Kyle Busch led the way when the race returned to green with two laps to go followed by Blaney, Larson, Truex and Keselowski.

Larson dominated most of the second stage and cruised to a more than 5-second advantage over Kyle Busch for the Stage 2 victory.

Hamlin was third, Keselowski fourth and Elliott rounded out the top-five.

Following the break between Stages 1 and 2, all the lead-lap cars pit with Larson the first off pit road.

On the restart on Lap 88, Larson was followed by Reddick, Kyle Busch and Byron.

With 60 laps remaining in this stage, Larson moved out to a 1.3-second lead over Kyle Busch with Keselowski in third and Truex in fourth.

With 40 laps to go, the first group of lead-lap cars hit pit road for a green-flag to take on new tires and fuel to make it to the finish.

Once the cycle of stops was completed on Lap 145, Larson returned to the lead followed by Stenhouse, Kyle Bucsh and Keselowski.

With 10 laps remaining, Larson had built a more than 7-second lead over Kyle Busch followed by Hamlin, Keselowski and Elliott.

Kyle Busch got around Larson with three of 80 laps remaining and held on for the Stage 1 victory, his first of the 2021 season.

Reddick ended up third, Keselowski was fourth and Byron rounded out the top-five.

Keselowski started on the pole and led the first 25 laps until NASCAR displayed a competition caution on Lap 26 to allow teams to check tire wear.

All lead-lap cars elected to pit with Keselowski the first off pit road. Chase Briscoe was penalized for speeding on pit road and had to restart the race from the rear of the field.

On the restart on Lap 31, Keselowski was followed by Byron, Bell, Reddick and Harvick.

With about 40 laps remaining in the first stage, NASCAR black-flagged the No. 6 Ford of Ryan Newman and forced him to pit to repair illegal body modifications made by his team during their pit stop.

With 30 laps to go in the stage, Keselowski maintained a small but steady lead over Byron while Reddick ran third and Larson fourth.

On Lap 56, Larson got around Reddick and took over the third position. Larson moved into the runner-up spot with 20 to go.

On Lap 64, Larson was able to go to the inside of Keselowski and grab the lead for the first time. Keselowski, however, came right back and reclaimed the lead on Lap 65.

With six laps to go in the stage, Larson went to the inside of Keselowski and came away with the lead once again.

Kyle Busch went to the inside of Larson with three laps to go and grabbed the lead for the first time in the race.

Three drivers – Chastain, Erik Jones and Anthony Alfredo – had to start the race from the rear of the field, Chastain and Jones for two inspection failures each and Alfredo for unapproved adjustments.