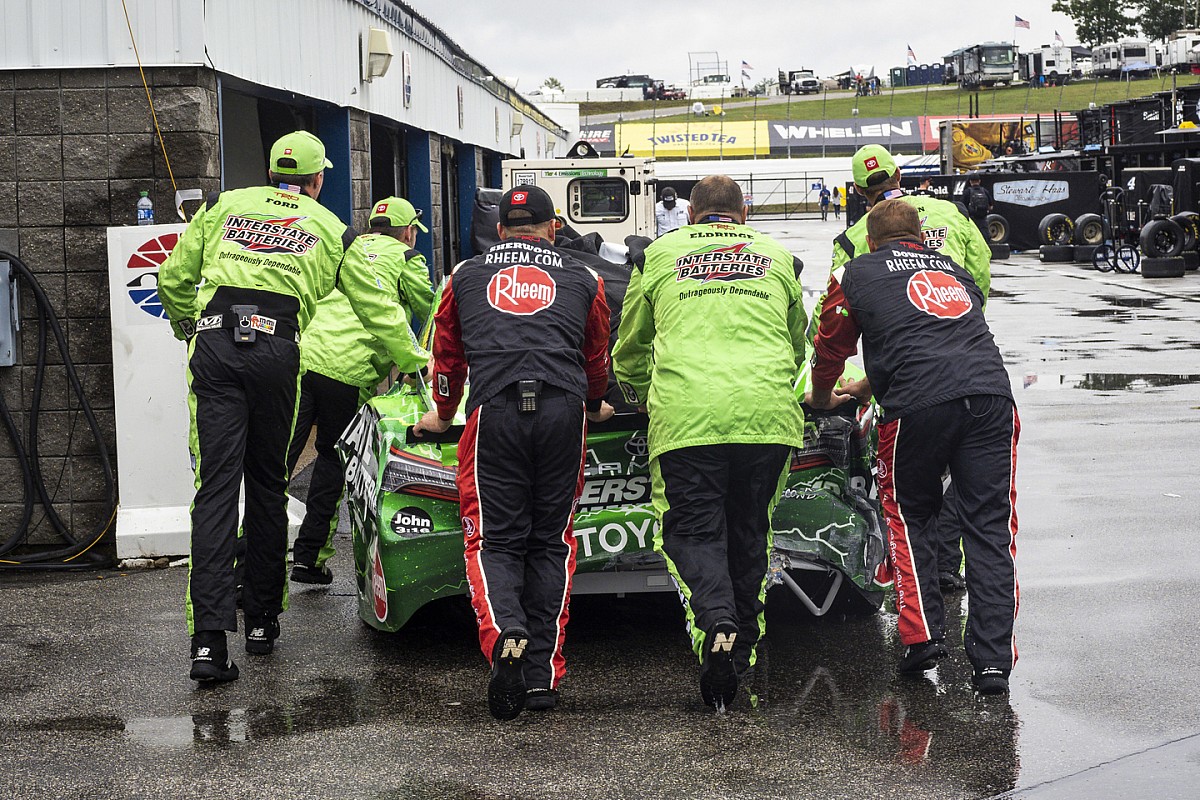 Despite drivers and a track official telling race control the track was wet in Turns 1 and 2 from “weepers” during pace laps the race went green as scheduled.

Heavy mist was already in the air and as the first handful of laps ticked off, it quickly got worse but before NASCAR could throw a caution, leader Kyle Busch, Martin Truex Jr. and Denny Hamlin all spun on the track on Lap 6.

The caution was finally displayed and almost immediately afterward, NASCAR put the race under the red flag as the entire track was soaked.

The damage to Busch’s No. 18 Toyota was extensive and his race was over.

“We started the race under a mist. It never should have gone green to begin with, but then it kept getting worse and worse lap over lap. The lap before I went into (Turn) 1 and it shoved the nose really bad and I was able to keep it under control,” Busch said.

“It wasn’t bad enough. The next time I went down there, hell, I lifted at the flag stand – maybe a little past the flag stand – and just backed it in. We’ve been talking about it for two laps that it was raining. There’s no sense in saying what I want to say, it doesn’t do you any good.”

Truex’s No. 19 Toyota appeared to suffer some serious damage but he said his team should be able to repair it enough to continue when the race resumed.

“It was wet the lap before. I was screaming it was wet,” Truex said. “The next time around, I lost it and it was done. There’s not much you can do on slicks in the rain.”

“I think we were just far enough up the field to be in the wreck, but far enough back to where I saw the leaders wrecking and were able to check up and brake 100 feet which kept us out of the wall. It was fortunate and unfortunate, but we’re going to be fine,” he said.

“That’s their job to tell NASCAR that it’s raining and we have to stop so we don’t have that situation. You always in these situations, you want them to air on the side of not looking bad and this is just a bad look.”

Steve O’Donnell, NASCAR’s executive vice president and chief racing development officier, joined the NBC broadcast booth to over NASCAR’s take on the start of the race.

“We can only go kind of off the pre-race discussions we have before the race with Kip Childress, who drives our pace car – constant communication with him before the race starts,” O’Donnell said. “‘Are we good to go?’ Even the lap before we start, we go green, Kip gave us the all clear to start that race.

“Then as the race started progressing, right before Kyle (Busch) got loose in Turn 2, obviously in wet track conditions, the communication to us was from the flag stand we’re seeing some mist. In any normal circumstance when we hear that, our next call is to the pace car, which is in Turn 1 here: ‘Are you seeing anything on your windshield?’ Drops started picking up. Kip communicated that.

“As Tim Bermann is about to put out the yellow, we look down and (Busch) is already getting loose. I’ve been here a number of years. That’s the first time I’ve seen that in terms of how quickly it came upon us. Certainly mist, we’ve raced in mist conditions before. The track got slick, obviously, in a hurry and it was unfortunate what took place.”