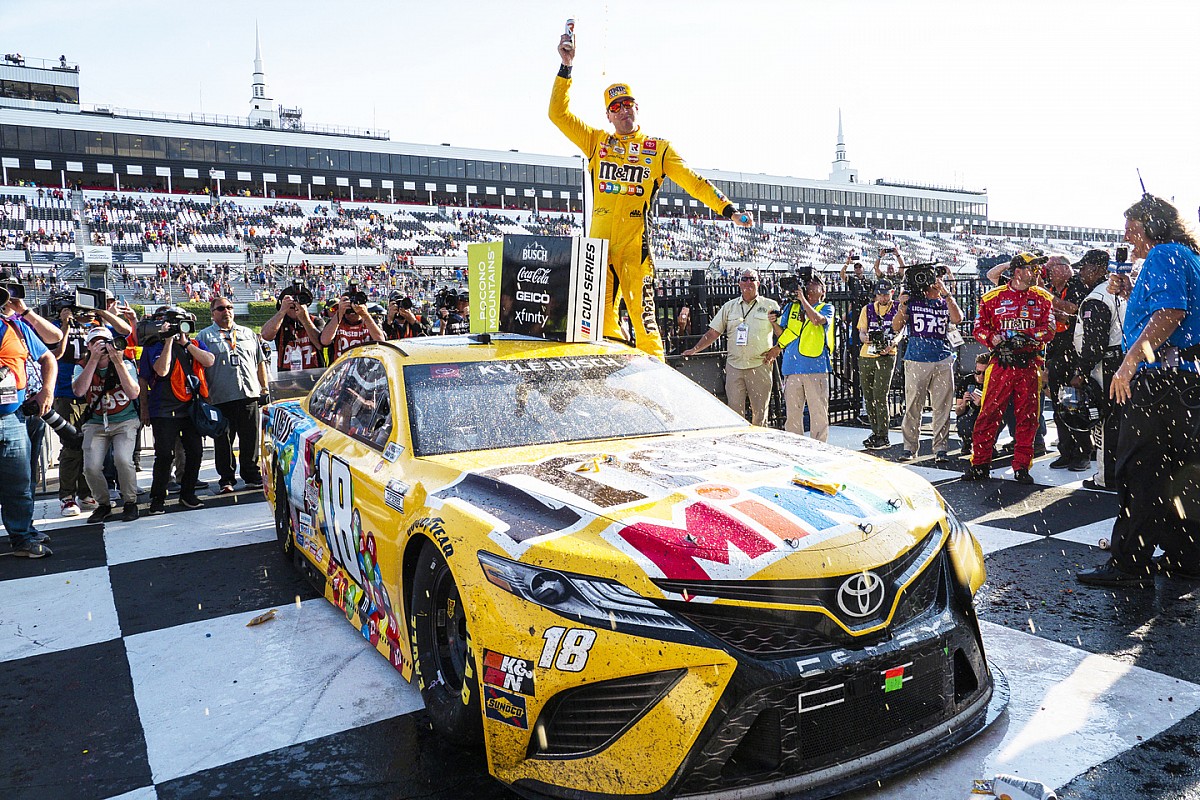 At one point in the race, Busch was dejected and ready to call it a day but he and his No. 18 Joe Gibbs Racing persevered, utilizing a fuel-mileage strategy that ultimately provided him his second win of the 2021 season.

“Yeah, stuck in fourth gear. About out of gas. Just saving, just riding, playing the strategy the best we could with what was given to us,” Busch said of his race. “Just can’t say enough about everybody on my team, everybody at Joe Gibbs Racing, Toyota, TRD, all the work they’re putting in.

“Sometimes these races aren’t always won by the fastest car, but I felt we had the fastest car. Even though we were in the back and behind and having to come through and persevere through being stuck in fourth gear, no clutch, all that stuff. It’s all burned out. Nothing left.

“It was awesome today. Feels good.”

With five of 140 laps remaining, William Byron was leading, Denny Hamlin was second and Busch third – but all close on fuel.

With two laps remaining, the picture began to change dramatically as first Byron was forced to pit for fuel and Hamlin had to do the same with just over one lap remaining.

Kyle Busch inherited the lead and was able to coast to the checkered flag with a more than 8-second lead over Kyle Larson.

“I don’t even know how we ended up second,” said Larson, who started from the rear of the field because of using a backup car. “I was pretty slow after (running into Hamlin early in the race) then are team clicked.

“We were able to stretch it out until the end. Great effort by our team.”

Brad Keselowski, who made a late stop for a splash of fuel, ended up third, Kevin Harvick was fourth and Bubba Wallace finished fifth – his first top-10 of the season.

Following the break between Stages 2 and 3, about half of the field elected to pit but Byron stayed out and remained in the lead. Once Kyle Busch pit, a crew member jumped in his No 18 Toyota to try to fix his shifter.

On the restart on Lap 91, Byron was followed by Hamlin, Christopher Bell and Chase Elliott.

On Lap 93, Erik Jones fell off the pace and dropped debris on the track after receiving damage from Corey LaJoie on the previous restart.

Several teams, including Byron, elected to pit but Bell stayed out and inherited the lead. The race resumed on Lap 97 with Bell followed by Elliott and Bowman.

Bowman powered into the lead in Turn 1 to take the lead for the first time in the race.

On the restart, Ross Chastain and Bell made contact with Chastain, who was forced to pit with a flat tire. Bell followed down pit road the following lap after making additional contact with Elliott.

Elliott was forced to pit under green on Lap 101 with a flat right-front tire. He had to pit a second time on Lap 107 for another flat tire.

With 30 laps remaining in the race, Bowman was working furiously to hold off a challenge from Harvick as Keselowski ran third.

Harvick hit pit road on Lap 113 for his final stop and took fuel-only to make it to the finish.

Bowman headed to pit road on Lap 115, handing the lead over to Keselowski.

With 20 laps to go, Keselowski remained out front followed by Byron, Kurt Busch, Hamlin and Larson. The top four were all going to be close on fuel if they didn’t make another pit stop.

Keselowski was forced to pit for fuel on Lap 133, handing the lead over to Byron, whose lead over Hamlin was about 5 seconds as both were saving fuel.

With five laps to go, Byron’s lead over Hamlin remained about 2 seconds over Hamlin with Kyle Busch in third.

Byron grabbed the lead after a round of green-flag pit stops and held off Hamlin to take the Stage 2 win.

Keselowski was third, Bell fourth and Elliott rounded out the top-five.

Following the break between Stages 1 and 2, much of the field pit but Keselowski stayed out and inherited the lead.

On the restart on Lap 36, Keselowski was followed by Blaney, Austin Dillon, Bell and Kyle Busch.

On Lap 46, Austin Dillon hit pit road and Keselowski and Blaney soon followed. They were all drivers that had stayed out during the stage break.

Kyle Busch inherited the lead on Lap 46 followed by Byron and Bell.

Blaney was forced to make a second pit stop under green for a loose wheel. He returned to the track in 34th and a lap down.

With 25 laps to go in the second stage, Kyle Busch held a small but steady lead over Byron. Bell ran third, 1.5 seconds behind the leader.

Byron, who was running second, hit pit road on Lap 65, among the first off a round of green-flag pit stops for tires and fuel to make it to the end of the stage.

Kyle Busch made his stop on Lap 74 but had a long stop as his No. 18 Toyota needed a push from his crew as his shifter got stuck in fourth gear.

Once the cycle of stops was completed, Byron moved into the lead on Lap 77.

With five laps to go, Byron had built up a 2.2-second lead over Keselowski while Hamlin had moved into third.

Keselowski was third, Blaney fourth and Wallace rounded out the top-five.

Chris Buescher started on the pole and led the way until Anthony Alfredo pounded the wall in Turn 3 on Lap 2 to place the race under caution.

The race resumed on Lap 7 with Buescher still in command followed by Michael McDowell and Bell.

McDowell moved quickly into the lead after the restart as Buescher washed up the track.

After several attempts, Truex finally got around McDowell to take the lead for the first time on Lap 14.

With five laps remaining in the first stage, Truex had built a 2.2-second lead over Bell with Almirola in third.

Hamlin decided to pit under green on Lap 26, leading a handful of drivers to make a stop prior to the end of the stage.

Cole Custer, Ryan Newman, Larson, Preece, Chastain, LaJoie and Alfredo all started from the rear of the field for moving to backup cars.