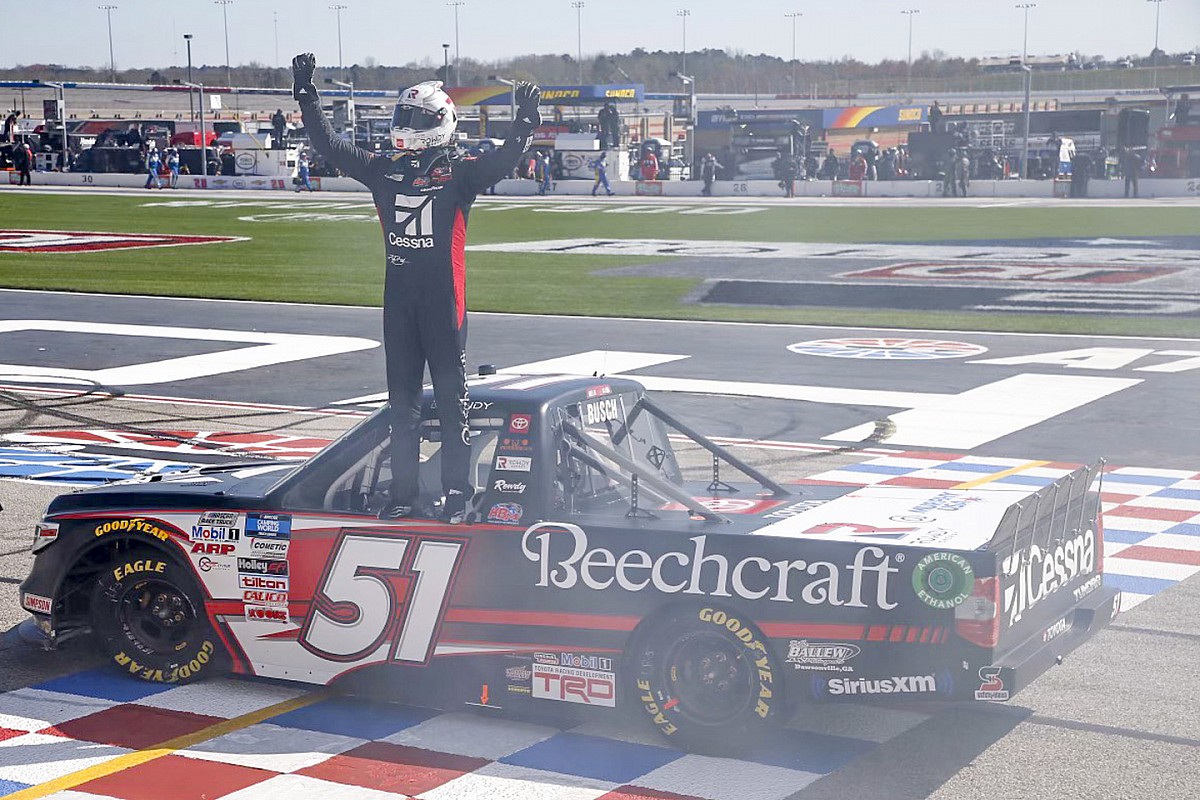 Busch dominated Saturday’s Fr8 Auctions 200, leading 102 of the 130 laps and cruised to victory over Austin Hill by more than 4 seconds to win the Truck Series race at Atlanta Motor Speedway.

The only thing Busch didn’t do was collect the stage wins – his teammate John Hunter Nemechek passed on the final lap of the first two stages to collect the wins and playoff points.

“It was just a great opportunity to race in some great stuff,” Busch said. “I can’t say enough about my guys – just everyone at Kyle Busch Motorsports. They do such a great job and a lot of hard work. Without their preparation and dedication we wouldn’t be as successful as we have been as an organization.

“It’s great to be back in Victory Lane.”

Following the break between Stages 2 and 3, all the lead-lap trucks elected to pit with Busch the first off pit road.

Austin Wayne Self and Tyler Ankrum were penalized for speeding on pit road; Derek Kraus was penalized for having a crew member over the wall too soon; and Friesen was assessed an uncontrolled tire penalty.

Busch led the way on the restart on Lap 68, followed by Nemechek and Hill.

With 50 laps to go in the race, Busch had built a more than 2-second lead over Nemechek as Hill ran third.

A round of green-flag pit stops kicked off on Lap 97 as teams took on new tires and fuel to make it to the finish of the race.

Once the cycle pit stops was completed on Lap 102, Busch returned to the lead. He was followed by Hill, Nemechek and Creed.

With 15 laps remaining in the race, Busch had expanded his lead to more than 3 seconds over Hill with Nemechek in third.

Once again, Nemechek passed Busch on the final lap to complete a sweep of wins in both Stages 1 and 2.

Friesen was third, Hill was fourth and Chastain completed the top-five.

Following the break between Stages 1 and 2, the lead-lap trucks all pit with Nemechek the first off pit road.

When the race resumed on Lap 38, Nemechek was followed by Jordan Anderson, Crafton, Busch and Friesen.

With 15 laps to go in the second stage, Nemechek maintained a small lead over Busch while Friesen moved up to third.

On Lap 46, Busch got back around Nemechek to reclaim the lead.

Raphael Lessard pit under green on Lap 51 due to what he believed was a flat tire.

With five laps remaining in the stage, Busch had built up almost a 1-second lead over Nemechek as Friesen remained in third.

Nemechek got around Busch with one lap remaining in the first stage and hung on for the Stage 1 victory.

Hill was third, Friesen was fourth and Chastain rounded out the top-five.

Nemechek started on the pole but passed him on the outside coming off Turn 4 to lead Lap 1.

On Lap 4, Busch got around Crafton in Turn 3 to take the lead for the first time in the race.

Chandler Smith pit under green on Lap 9 for what he thought was a flat tire.

On Lap 16, NASCAR displayed a competition caution to allow teams to check tires. The race turned to green on Lap 21.

With five laps remaining in the first stage, Busch had built up a 1.5-second lead over Nemechek.

Moffitt and Josh Berry both started from the rear of the field – Moffitt for an engine change and Berry for a driver change, as he was substituting for Kris Wright who was diagnosed with COVID-19.