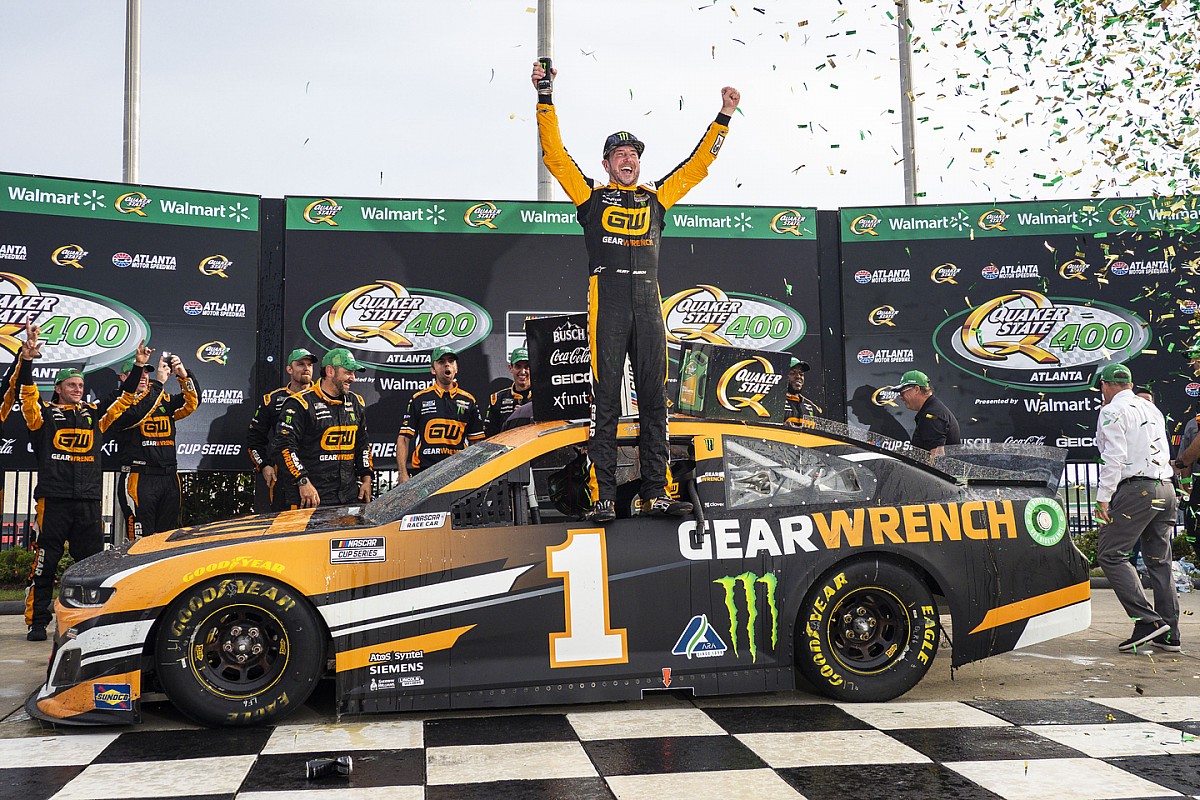 After spending much of the race swapping the lead, Kyle Busch emerged as the leader on Lap 213 of 260 following the final round of green-flag pit stops.

But Kurt did not go away and methodically began chasing Kyle back down. With the help of Kurt’s Chip Ganassi Racing teammate, Ross Chastain, slowing him up, Kurt passed Kyle with 25 laps remaining.

Although Kyle mounted several more challenges for the lead, Kurt was finally able to put some distance between the two after Kyle brushed the wall and claimed the win by 1.237 seconds.

“Hell yeah, we beat Kyle,” Kurt exclaimed after exiting his No. 1 Chevrolet. “I taught that kid everything I know. He should be grateful.”

“That’s the biggest thing, just trying to pull out all the tricks and beat little brother,” Kurt said. “He’s one of the best in our sport. It took a teammate, in Ross Chastain, but what an incredible car and execution all day.

“We’ve won a race, we’re in the playoffs, no sweat going into September.”

The race was the last on Atlanta Motor Speedway’s current surface and configuration, which is likely a good thing. The race was halted 20 minutes between Stages 2 and 3 to repair chunks of track that came up on the frontstretch.

The win is Kurt Busch’s first of the season and locks him into the series playoffs. Four spots in the 16-driver field remain open with five races left in the regular season.

“I just kept asking the track, ‘Hey I’ve been here a long time with you. I missed the race in 2000, then I came back and won in 2002.’ To win this, on the old asphalt, I’m very appreciative to win the last race on this asphalt at Atlanta,” Kurt said.

Kyle Busch was not nearly as pleased with Chastain as his brother.

“Would’ve been a hell of a lot better if it wasn’t for some butthead. But it is what it is,” Kyle said. “It was ours to lose and we lost it.”

Martin Truex Jr., who started the race from the rear of the field, finished third, Alex Bowman was fourth and Ryan Blaney rounded out the top-five.

Following the break between Stages 2 and 3, all drivers pit with Kurt Busch again the first off pit road. Denny Hamlin was penalized for speeding on pit road during his stop and had to restart from the rear of the field.

During the break, NASCAR displayed the red flag for nearly 20 minutes and dispatched a track repair team to the restart zone of the frontstretch as it was reported a “chunk of track” had come up.

On the restart on Lap 171, Kurt Busch was followed by Kyle Busch, Bowman, Kyle Larson and Reddick.

With 55 laps to go, Kyle Busch had closed to within a half-second of leader Kurt Busch as Bowman remained third.

On Lap 212, Joey Logano, Kurt and Kyle Busch were among the first group of drivers to hit pit road for a final round of green-flag pit stops to take on tires and fuel to make it to the end of the race.

Larson was penalized for speeding on pit road and had to serve a pass-through penalty.

Once the cycle of stops was completed on Lap 213, Kyle Busch emerged as the leader followed by Kurt Busch, Bowman, Truex and Reddick.

With 25 laps to go in the race, Kyle Busch maintained about a half-second lead over Kurt Busch. Bowman remained third, Truex fourth and Reddick fifth.

After closing in for several laps, Kurt Busch finally got around his brother, Kyle, on Lap 236 to reclaim the lead after Kyle was stymied by Chastain, Kurt Busch’s teammate.

With 10 laps remaining, Kurt Busch held a small but steady lead over Kyle Busch, with Kyle trying varying lines on the track to catch his brother. Truex had moved into third.

Kurt Busch dominated on his way to the Stage 2 victory over his brother Kyle. It’s Kurt’s third stage win of the season, all coming in the past five races.

Bowman was third, Larson fourth and Reddick rounded out the top-five.

Following the break between Stages 1 and 2, the lead-lap cars all pit with Kurt Busch the first off pit road. Elliott had a slow stop, nearly running into Cole Custer, and came out 20th. Truex and Kevin Harvick also made contact on pit road.

On the restart on Lap 87, Kurt Busch was followed by Kyle Busch, Hamlin and Bowman.

Bowman moved into the second spot on Lap 96 as Kurt Busch continued to lead the way.

On Lap 107, Logano was forced to pit under green to fix a left-rear loose wheel.

With 50 laps to go in the stage, Kurt Busch held a 1.8-second lead over his brother, Kyle, while Bowman ran third.

A round of green-flag stops got underway with 40 laps to go but light rain was also reported in the area as the race neared its halfway point.

Once the cycle of stops was completed on Lap 132, Kurt Busch returned to the lead followed by Kyle Busch and Bowman.

With 20 laps to go in the stage, Kurt Busch had built up a 4-second lead over Kyle Busch with Bowman third and Reddick fourth.

With five to go, Kurt Busch had pushed his lead to nearly 5 seconds over Kyle Busch.

Kyle Busch easily held off his brother, Kurt, by nearly 2 seconds to claim the Stage 1 win, his fourth stage victory of the 2021 season.

Hamlin was third, Bowman fourth and Reddick rounded out the top-five.

Elliott started on the pole and led early until Kyle Busch went to the inside in Turn 3 on Lap 14 to grab the top spot.

On Lap 26, NASCAR displayed a competition caution to allow teams to check tire wear as there was no practice or qualifying over the weekend.

All the lead-lap cars pit with Hamlin the first off pit road. On the restart on Lap 30, Hamlin was followed by Kyle Busch, Reddick and Larson. Busch powered into the lead on the restart.

On Lap 31, Ricky Stenhouse Jr., Daniel Suarez and Cody Ware wrecked on the backstretch to quickly bring out another caution.

The race returned to green on Lap 36 with Kyle Busch followed by Hamlin and Logano.

With 25 laps remaining in the stage, Kyle Busch held about a half-second lead over his brother, Kurt, as Bowman moved into third.

After 75 of 80 laps in the stage, Kyle Busch had expanded his lead over his brother, Kurt to 2 seconds with Hamlin back in third.

Truex had to start the race from the rear of the field after his No. 19 Toyota failed pre-race inspection twice.