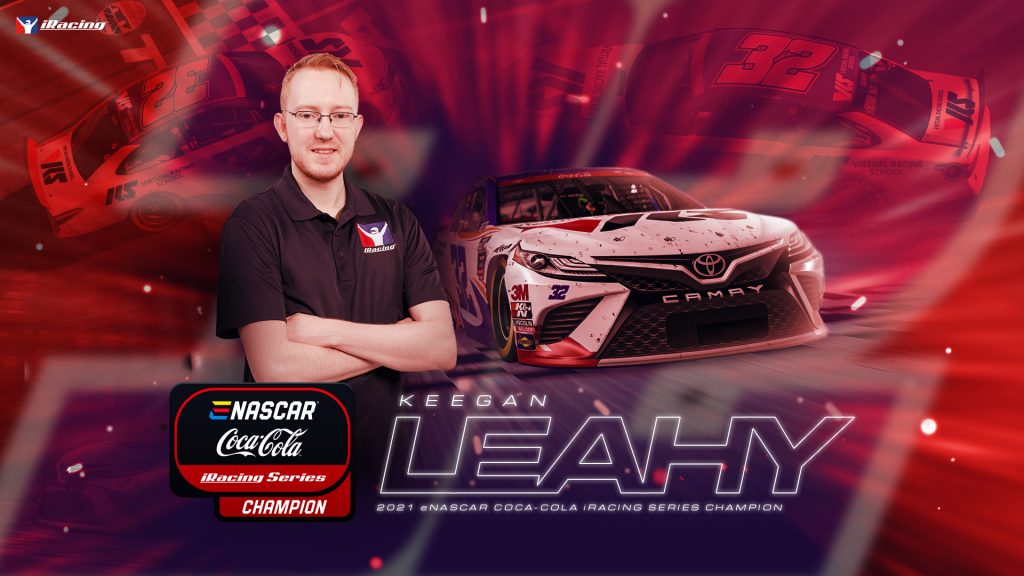 DAYTONA BEACH, Fla. (Oct. 13, 2021) – Keegan Leahy outlasted the Championship 4 field at virtual Texas Motor Speedway on Tuesday night, clinching his first eNASCAR Coca-Cola iRacing Series championship in a thrilling close to the 2021 season. With a total purse of more than $300,000 in play for the season, Leahy took home the champion’s share of $100,000 by taking the checkered flag.

“It’ll take me about a month to process this, I’m sure,” an elated Leahy said after taking his third win of the season. “My whole family is watching this. This is so huge to me, I’m sure it’s huge to 23XI, I don’t know where to start. My plan, which I think worked, was just to save tires until (Logan Clampitt) got to me, and hope we had even cars when he got to me. Thank you everybody, thank you to Denny Hamlin for believing me, I can’t name everybody, but thank you all so much!”

Alongside his 23XI Racing teammate Mitchell deJong, William Byron eSports’ Logan Clampitt, and Letarte Esports’ Bobby Zalenski, Leahy was one of four drivers looking to win his first series championship in a season that saw 14 different race winners this season. The premier sim racing series, the eNASCAR Coca-Cola iRacing Series concluded its 12th season and continues to be one of the longest running esports series.

“We’ve seen incredible growth in the eNASCAR Coca-Cola iRacing Series over the past couple of years and this year was no different,” said Nick Rend, Managing Director of Gaming and eSports, NASCAR. “With new teams and more intense racing from the top sim racers in the world, the 2021 season continued to build fan interest globally and is a testament to iRacing’s commitment and leadership in the eSports realm.”

In its first season as the championship event, Texas Motor Speedway turned up the competition among the Championship 4 competitors. With $100,000 on the line, deJong and Leahy qualified on the front row and held the top two spots through the first set of green flag pit stops. After waiting in second through the early stages, Leahy got a run on deJong down the backstretch and took over the lead for the first time on Lap 92.

Following a second set of green flag pit stops, Leahy returned to the top spot on Lap 127, cycling back into the lead as Clampitt climbed his way from the 16th row on the grid to second place in the closing stages. Clampitt tried to line up the field behind him to get a push to the lead, but Leahy’s advantage proved to be too much to overcome in the caution-free race.

“iRacing is proud to congratulate Keegan Leahy on winning this year’s eNASCAR Coca-Cola iRacing Series title,” said Anthony Gardner, President iRacing.com Motorsport Simulations. “In our biggest and most exciting eNASCAR season yet, and a year where 14 different drivers won races, this year’s championship was the hardest-fought yet. We’re grateful to NASCAR, Coca-Cola, and all of our partners for their support through a thrilling season, and can’t wait to do it all again next year!”