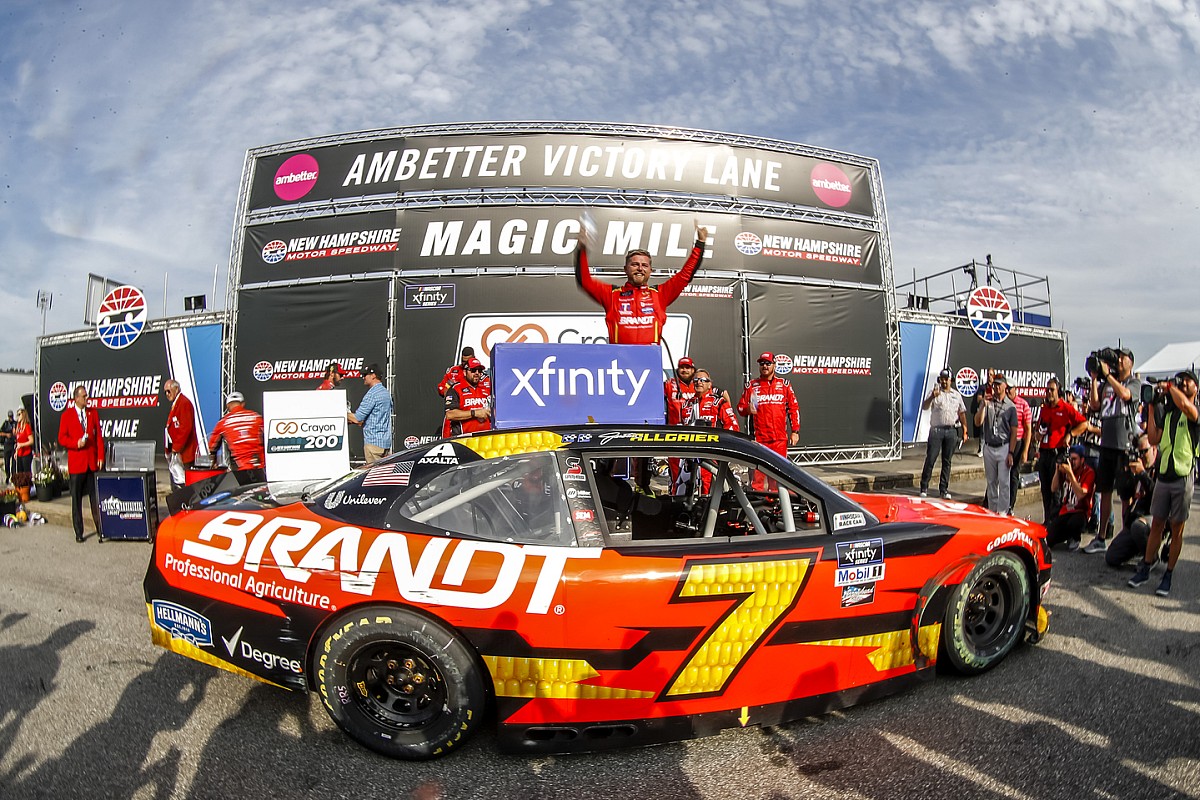 During the course of Saturday’s 200-lap event, three of the top contenders – including two of the top-three lap leaders – fell to the wayside.

Allgaier grabbed the lead for the first time on Lap 152, lost it to Landon Cassill and then regained it two laps later. He held off Trevor Bayne by 3.869 seconds to claim the victory.

The win is third this season for Allgaier and second in the past four races. It’s also the 19th of his career.

“I told these guys I really wanted to win here. This place has been so much fun over the years,” Allgaier said. “First of all, it’s wife’s birthday today (Ashley). If I can’t be with my wife on her birthday the best thing to do is take a trophy home to her.

“I didn’t do a good job early on in the race. I apologize to Julia (Landauer) and the No. 45 team. I got into her. I still don’t what happened. I still feel bad no matter what the case was. I just felt all day that I wasn’t doing a good job.

“The guys kept me calm. We had great pit stops all day. I’m just really proud of this team.”

Both Ty Gibbs and William Byron, who together led a combined 71 laps, fell out of contention. Gibbs suffered a broken bolt to the camber shaft at the end of Stage 2 and Byron blew an engine in the final stage.

The race was slowed nine times by caution and there was one red flag that lasted nearly eight minutes for a multi-car accident.

Following the break between Stages 2 and 3, all the lead-lap cars pit with Byron the first off pit road. Gibbs had an extended stop on pit road to check his brakes and had to make a second stop.

On the restart on Lap 98, Byron was followed by Cassill, A.J. Allmendinger and Josh Berry.

Matt Mills and Julia Landauer spun and wrecked in Turn 1 shortly after the restart to bring out the fourth caution of the race.

The race resumed on Lap 104. Byron was followed by Cassill, Allmendinger and Berry.

Byron immediately fell off the pace, which turned the lead over to Cassill. Byron was forced to pit under green for a flat tire.

On Lap 106, Daniel Hemric wrecked in Turn 3 after suffering a left-rear tire failure, which again brought out a caution. When the race returned to green on Lap 112, Cassill led the way followed by Berry, Allgaier and Allmendinger.

Berry went to the outside of Cassill on the restart and grabbed the lead for the first time in the race.

Derek Griffith spun coming off Turn 4 on Lap 116 to place the race back under caution. Only a handful of teams elected to pit. Berry was among those who stayed out and remained in the lead on the restart on Lap 120.

On Lap 123, Cassill got around Berry in Turn 3 to reclaim the lead.

Berry cut down the track in front of Creed in Turn 2 on Lap 116 and then spun in front of the rest of the field, which collected the cars of Ryan Sieg, Jeb Burton, Myatt Snider, Riley Herbst and Brandon Jones.

The race was red-flagged for nearly eight minutes to clear the track for debris. Most of the lead-lap cars elected to pit with Creed the first off pit road.

Brown, among those who stayed out, inherited the lead. Just before the race return to green, Berry’s No. 8 Chevrolet caught fire and was forced to stop on the track.

The race finally returned to green on Lap 138 with Brown out front followed by Anthony Alfredo, Weatherman and Jones. Creed lined up eighth.

On Lap 140, Creed went to the inside entering Turn 1 and cleared Brown for the lead.

Allmendinger went up the track on the frontstretch and into Alex Labbe as both hit the wall on Lap 143 to bring out the eighth caution of the race. Jones, Sam Mayer and J.J. Yeley were also caught up in the incident.

The race resumed on Lap 150 with Creed still out front, followed by Cassill, Brown, Hill and Gragson.

Cassill jumped to the lead on the restart only to see Allgaier get around him on the outside on Lap 152 to move out front.

NASCAR displayed a caution on Lap 174 for debris and fluid on the track from the No. 13 of Akinori Ogata, who appeared to blow an engine.

The race returned to green on Lap 178 with Allgaier out front followed by Cassill and Bayne.

Cassill quickly cleared Allgaier on the restart to return to the lead. Allgaier got a launch off Turn 2 and reclaimed the lead entering Turn 3 with 18 laps remaining.

With 16 laps remaining, Brown – who pit for new tires on the previous pit stop – moved into the top-five.

With 10 laps to go, Allgaier had expanded his lead over Cassill to more than 1-second with Bayne in third.

Hemric cruised to the Stage 2 win over Cassill while Hemric spun Gragson as the two battled for position on the last lap.

Gibbs was third, Bayne fourth and Allgaier rounded out the top-five.

Following the break between Stages 1 and 2, a handful of cars which did not pit in Stage 1 did so and Gibbs inherited the lead.

When the race restarted on Lap 53, Gibbs was followed by Allmendinger, Byron and Bayne.

With 25 laps remaining in the stage, Gibbs had expanded his lead over Byron to 1.4-seconds as Cassill moved into third.

With 10 laps to go, Byron had cut Gibbs’s lead to less than a second while Cassill remained in third.

On Lap 82, Byron finally ran down Gibbs and passed him on the outside in Turns 1 and 2 to move into the lead for the first time in the race.

Cassill got around Gibbs with two laps remaining to move into the runner-up position, 2.8 seconds behind Byron.

Sieg held off Gibbs on fresher tires in a four-lap dash to take the Stage 1 win, his first of the 2022 season.

Berry won the pole but had to restart the race from the rear of the field after his team worked on his car following qualifying on Saturday.

Allgaier moved up to the No. 1 starting position but Hemric led the first lap.

On Lap 6, Gibbs moved ahead of Hemric as both lid up the track and Bayne went below both to move into the lead.

Gibbs caught Bayne and went to his inside on Lap 23 to take the lead for the first time in the race.

With 20 laps remaining in the first stage, Gibbs held about a half-second lead over Bayne with Allgaier third and Byron fourth.

On Lap 35, Landauer – making her series debut – hit the wall on the frontstretch after contact with Allgaier to bring out the first caution of the race.

Most of the lead lap cars pit with Gibbs first off pit road. Sieg was among those who stayed out and inherited the lead.

The race resumed on Lap 42 with Sieg followed by Alfredo, Brown and Snider. Gibbs lined up eighth.