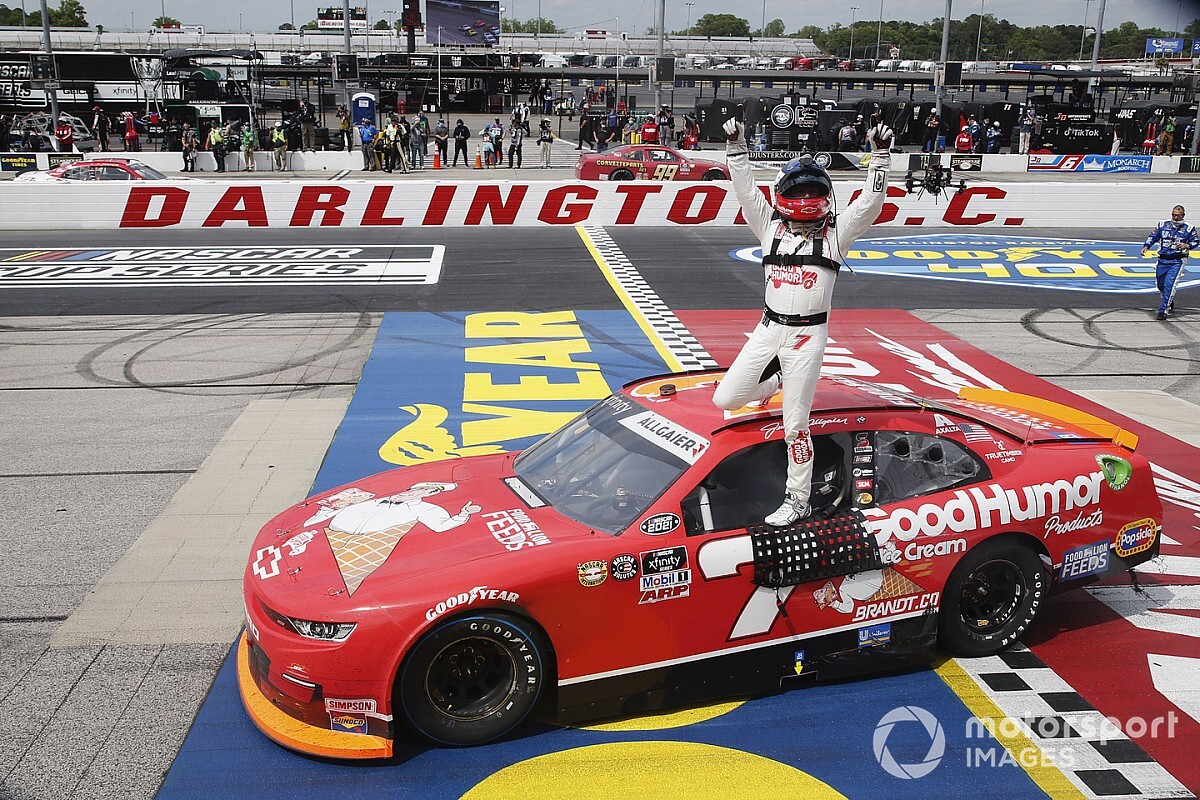 The final two starts of Saturday’s race proved the difference for Allgaier.

He grabbed the lead for the first time in the race on a restart on Lap 138 of the scheduled 147, then was able to hold off two of his JRM teammates – Josh Berry and Noah Gragson – in overtime to secure his second series win of the 2021 season.

The win is 16th of Allgaier’s career and he joins Austin Cindric as the only series drivers to win more than one race this season.

As it turned out, Allgaier said he got some special motivation from the fans in attendance.

“First of all, y’all are awesome,” Allgaier said toward the fans. “Fans being back in the grandstands, this is special. You don’t realize how much energy you feed into what we do.

“I’ll be honest with you, there’s a guy right over here with a navy-blue shirt and he gave me the middle finger with both hands on that last caution. That gave me a lot of motivation.

“My car wasn’t as good as we wanted it to be all day but we just kept fighting. It was special to have those JR Motorsports Chevys up front battling for the win. I know Josh would have wanted that one right there.

“To check off (wins) at Atlanta and Darlington – I couldn’t be more appreciative of this race team. Hats off to everybody on this team. Just everybody that is a part of this.”

As the highest finishing eligible driver, Gragson won the $100,000 Dash 4 Cash bonus for the third time this season. Gragson, Allgaier, Berry and Jones will all be eligible for the bonus next weekend at Dover, Del.

Following the break between Stages 2 and 3, several lead-lap cars pit but Harrison Burton remained on the track and in the lead. Jeb Burton was the first off pit road among those who pit.

On the restart on Lap 100, Harrison Burton was followed by Gragson, Berry and Myatt Snider.

Gragson quickly powered around Harrison Burton after the restart to move back into the lead.

With 30 laps to go in the race, Gragson maintained a small but steady lead over Harrison Burton as Berry moved into third and Ty Gibbs to fourth.

On Lap 122, Gibbs got around Berry to take over the third position.

Gray Gaulding spun off Turn 2 and wrecked on Lap 126 after contact from Joe Graf Jr. to bring out the seventh caution of the race.

All of the lead-lap cars pit with Harrison Burton the first off pit road. Gibbs was penalized by NASCAR for speeding on pit road – the second time in the race – and had to restart from the rear of the field.

When the race returned to green on Lap 132, Harrison Burton led the way followed by Berry, Gragson and Allgaier.

Berry grabbed the lead on the restart and the race returned to caution on Lap 133 when Graf wrecked in Turn 4.

The leaders remained on the track and Berry led the way on the restart with 10 laps to go. He was followed by Allgaier, Harrison Burton and Gragson.

On Lap 142, Ryan Vargas spun between Turns 1 and 2 to bring out a caution and send the race into overtime. Several lead-lap cars pit during the caution but Allgaier remained on the track and in the lead.

When the race returned to green, Allgaier was followed by Berry, Gragson, Hemric and Jones. Harrison Burton, the first driver with new tires, lined up 20th.

Harrison Burton passed A.J. Allmendinger in Turn 4 on the final lap and claimed the Stage 2 victory, his first of the 2021 season.

Following the break between Stages 1 and 2, all the lead-lap cars elected to pit with Hemric the first off pit road.

Gibbs was penalized by NASCAR for speeding on pit road and had to restart from the rear of the field.

When the race returned to green on Lap 53, Hemric led the way followed by Gragson, Snider, Austin Cindric and Allmendinger.

With 30 laps remaining in the second stage, Hemric maintained a small but steady lead over Gragson as Allmendinger ran third and Cindric fourth.

Tommy Joe Martins was forced to pit under green with 20 laps to go in the stage after he hit the wall and cut a tire.

With 10 laps to go in the stage, Hemric had built a 3.5-second lead over Allmendinger while Gragson dropped to third.

On Lap 83, Jesse Little spun in Turns 1 and 2 to bring out the fifth caution of the race. Hemric was forced to pit before the race returned to green with a flat tire and turned the race lead over to Allmendinger.

Allmendinger led the way on the restart with three laps to go in the second stage.

Cindric’s Stage 1 win was secured when Matt Mills spun off Turn 4 on the final lap to bring out the caution.

Allmendinger, who started on the pole, led the first three laps until Cindric got around him for the top spot on Lap 4.

Just after Cindric took the lead, Brandon Gdovic and J.J. Yeley wrecked on the backstretch to bring out a caution on Lap 5.

The race returned to green on Lap 8 with Cindric still out front.

On Lap 13, Gdovic hit the wall in Turn 3 to bring the caution back out. The race returned to green on Lap 17 with Cindric leading Allmendinger.

Gragson powered around Cindric after the restart to move into the lead for the first time in the race.

NASCAR displayed a competition caution on Lap 21 to allow teams to check tire wear. Most cars did not pit and Gragson remained the lead when the race returned to green on Lap 26.

Cindric got around Gragson on the restart in Turns 1 and 2 to reclaim the lead.

With 10 laps remaining in the first stage, Cindric opened up a 1-second lead over Gragson as Allmendinger ran third.