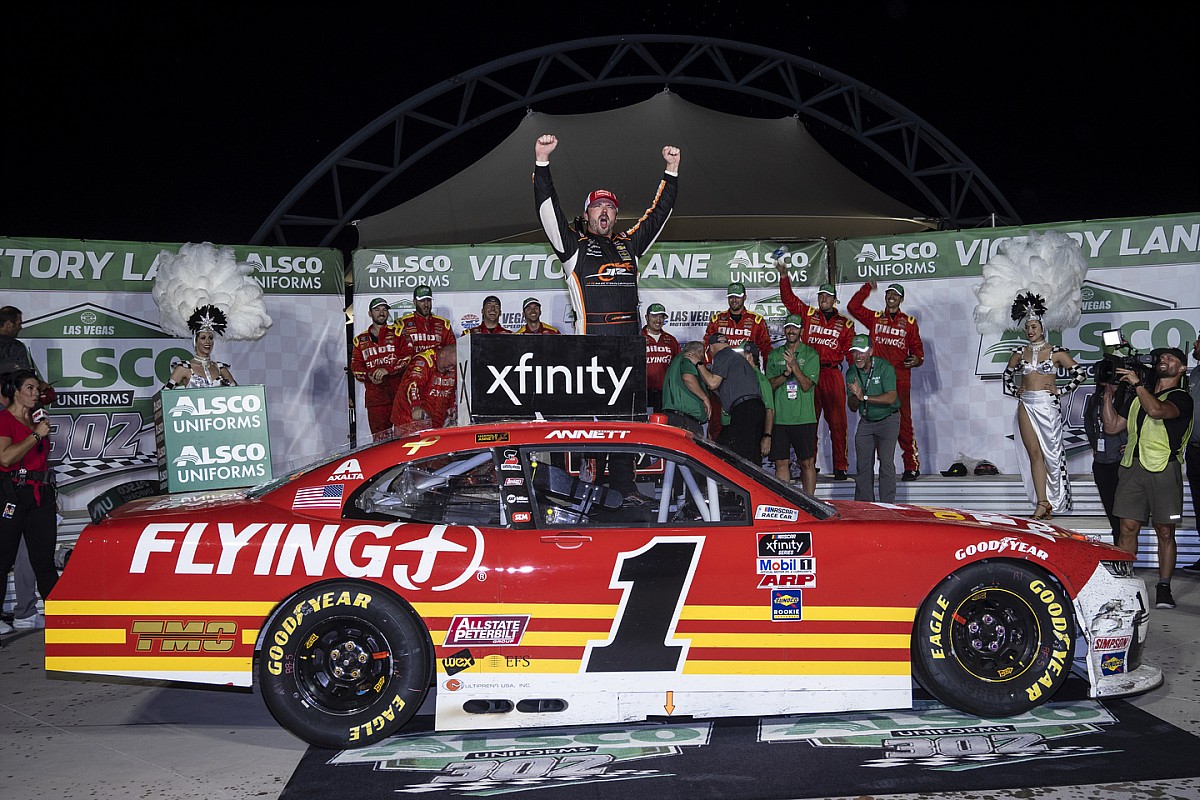 Berry, filling in for the injured Michael Annett in JRM’s No. 1 Chevrolet, powered past teammate Justin Allgaier with 16 of 201 laps remaining and cruised to a 4.398-second victory in the Alsco 302.

The win is the second of the season for Berry, who ran a partial schedule for JRM as well as serving as a substitute for Annett. His first win came in the No. 8 at Martinsville, Va., earlier this season.

“Oh my gosh, this thing was so fast,” Berry said. “It just took me a while to figure it out. I knew the race would go down to the bottom (lane) at the end I felt like. I just wanted to work hard and make sure my car was good on the bottom.

“I just had stay disciplined and keep working on it and these guys made the right adjustments. It was fast. Just finally got a long run, put everything together and was able to do it.”

Asked about racing his teammate Allgaier, who is competing for the series driver’s title, Berry said: “It was tough. Me and Justin have raced together a lot this year and most of them he’s gotten the better of me.

“Today we were able to get one. This is cool. I wanted to say hi to Michael at home and thank him and his group for trusting me to drive his race car.”

Three playoff drivers – Jeremy Clements, Jeb Burton and Riley Herbst – wrecked out of the race early and Berry’s win denied any of the others from earning an automatic berth in the second round.

Cindric leads the playoff standings by seven points over Allmendinger with two races remaining in Round 1 – next weekend at Talladega, Ala., and the Charlotte Roval.

Following the break between Stages 2 and 3, the lead-lap cars all pit with Allgaier the first off pit road. Gragson was penalized again on his stop, this time for speeding on pit road, and had to restart from the rear of the field.

On the restart on Lap 97, Allgaier was followed by Cindric, Hemric, Ty Gibbs and Haley.

Haley spun on Lap 121 after contact with Brett Moffitt in Turn 3 to bring out the sixth caution of the race.

All the lead-lap cars pit with Allgaier just ending Cindric off pit road. When the race returned to green on Lap 126, Allgaier was followed by Cindric, Gibbs, Allmendinger and Gragson.

Cindric was able to run down Allgaier in Turn 2 and reclaim the lead on Lap 134 as Allmendinger moved into third.

On Lap 138, Allgaier ran Cindric back down to retake the lead, passing him on the apron.

With 50 laps remaining in the race, Allgaier’s lead over Berry had grown to a second while Cindric remained third and Gragson fourth.

Berry got a strong run on Allgaier coming off Turn 4 and moved around Allgaier entering Turn 1 on Lap 160 to take the lead for the first time in the race.

A final round of green-flag pit stops kicked off with 25 laps remaining as teams needed additional fuel to make it to the finish of the race.

Allgaier and Gibbs stopped on Lap 179 with Gibbs picking up a speeding penalty and had to make a pass-through penalty. Berry made his stop on Lap 182.

Once the cycle of stops was completed on Lap 183, Allgaier emerged as the leader of the race once again.

Berry, however, was able to pass Allgaier on the outside and clear him to reclaim the lead with 16 laps to go.

With five laps remaining in the race, Berry had increased his lead over Allgaier to 4 seconds as Gragson ran third, 8.8 seconds behind the leader.

Allgaier cruised to the Stage 2 win by 3.7 seconds ahead of Dillon.

Cindric was third, Gragson fourth and Hemric rounded out the top-five.

Following the break between Stages 1 and 2, most of the lead-lap cars elected to pit with Hemric the first off pit road.

Both Ryan Sieg and Gragson had to restart from the rear of the field – Sieg for a safety violation during his stop and Gragson for driving through too many pit stalls on entry.

On the restart on Lap 52, Dillon – who stayed out – led the way followed by Brandon Brown and Hemric.

On Lap 54, Sieg spun off Turn 2 to bring out a caution. The race returned to green on Lap 60 with Dillon out front, followed by Hemric and Harrison Burton.

On Lap 66, Allgaier powered around Dillon to take the lead for the first time in the race as Harrison Burton ran third.

With 10 laps remaining in the stage, Allgaier had run out to a 1.1-second lead over Dillon as Cindric ran third.

Allmendinger held off a fast-approaching Hemric following a late restart to take the Stage 1 victory, his 10th of the 2021 season.

Cindric was third, Gibbs fourth and Gragson rounded out the top-five.

Cindric started on the pole and led every lap until NASCAR displayed a competition caution on Lap 27 to allow teams to check tire wear.

Most lead-lap cars remained on the track but Allgaier elected to pit to have his team check for a possible oil leak.

On the restart on Lap 31, Cindric was followed by Allmendinger, Hemric, Gibbs and Gragson.

“I know that the restarts are wild here. We kind of spun the tires. There was just not enough room for everybody,” Herbst said.

A total of 12 cars were involved in the wreck with eight knocked out of the race. On the restart on Lap 41, Allmendinger led the way followed by Cindric and Gibbs.