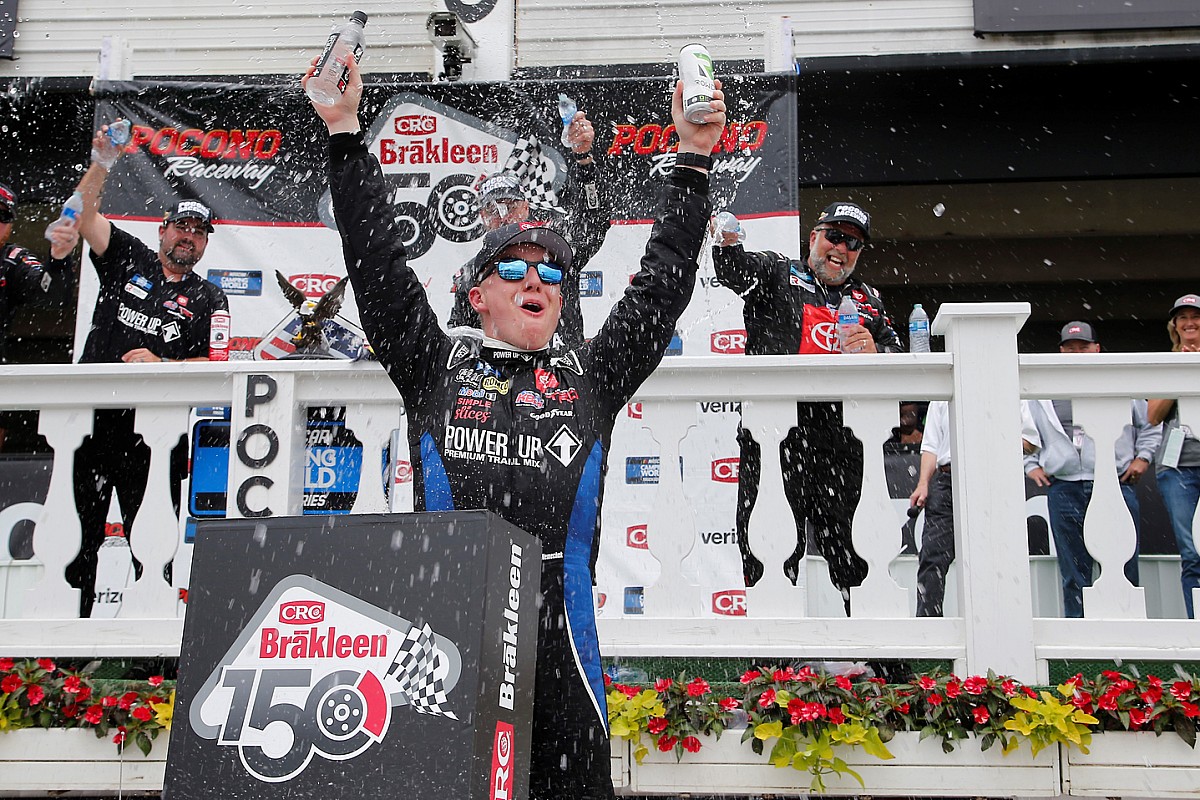 The win is Nemechek’s fifth in the 2021 season driving for Kyle Busch Motorsports and in the five races in which Busch has competed, Nemechek has finished better than Busch in three of them.

“How about that, baby? 3-2 we beat Kyle,” Nemechek said over his team radio as he claimed the 11th victory of his Truck career.

As a fulltime competitor in the Cup Series, Busch is only allowed to make a maximum of five starts each season.

“It just means a lot. This whole group just works so hard. These guys never gave up,” Nemechek said. “We weren’t very good the first stage. We were off. We were only planning to do one (pit) stop but we ended up with way more.

On Nemechek’s pass for the lead, Busch said, “We were all even going into (Turn) 1 and John Hunter just slid me and got into the lead. I was trying to figure out what I could do to get the lead back and them I got drilled in the left-rear. We were just fighting for second from there on out.”

Following the break between Stages 2 and 3, several lead-lap trucks pit but Busch stayed out and inherited the lead.

Ben Rhodes was penalized for speeding on pit road and had to restart from the rear of the field. The race returned to green on Lap 36.

With 20 laps remaining in the race, Busch had not been able to shake Creed, who remained glued to his rear bumper while Carson Hocevar ran third.

On Lap 48, Chandler Smith was forced to pit under green for a flat right-front tire.

On Lap 51, Stewart Friesen wrecked and in Turn 1 and did significant damage to his No. 52 truck, which brought out a caution.

Several lead-lap trucks pit but Busch remained on the track and in the lead. The race returned to green on Lap 55 with Busch out front followed by Creed and Nemechek.

Nemechek cleared Busch in Turn 1 on the restart to take the lead.

Nemechek held off Rhodes to claim the Stage 2 win, his ninth stage victory of the year.

Friesen was third, Austin Hill fourth and Crafton rounded out the top-five.

Following the break between Stages 1 and 2, several lead-lap trucks elected to pit with Nemechek the first off pit road.

Zane Smith stayed out and remained in the lead when the race returned to green on Lap 20. Busch and Creed were second and third, respectively.

On Lap 22, Busch tagged the wall off Turn 1 but didn’t appear to suffer any serious damage.

On Lap 25, Creed got around Zane Smith to take the lead for the first time in the race.

With five laps remaining in the stage, Creed held a less than a second lead over Nemechek with Zane Smith in third.

Several drivers elected to pit before the stage break but Zane Smith entered pit road after it was closed and was penalized.

Nemechek inherited the lead during the pit stops.

Zane Smith held off a fast-approaching Busch to claim the Stage 1 win, his third of the 2021 season.

Creed was third, Gilliland fourth and Chandler Smith rounded out the top-five.

Gilliland started on the pole but the race was immediately placed under caution when Chandler Smith got into the back of Jack Wood and turned him into the frontstretch wall. Johnny Sauter was also caught up in the incident.

On the restart on Lap 5, Gilliland remained the leader followed by Zane Smith and Austin Hill.

Zane Smith quickly powered to the lead on the restart. One lap later, Rhodes got around Smith to grab the lead for the first time. Smith returned the favor and reclaimed the lead on Lap 8.

With five laps remaining in the stage, Zane Smith held a small lead over Creed with Gilliland in third.