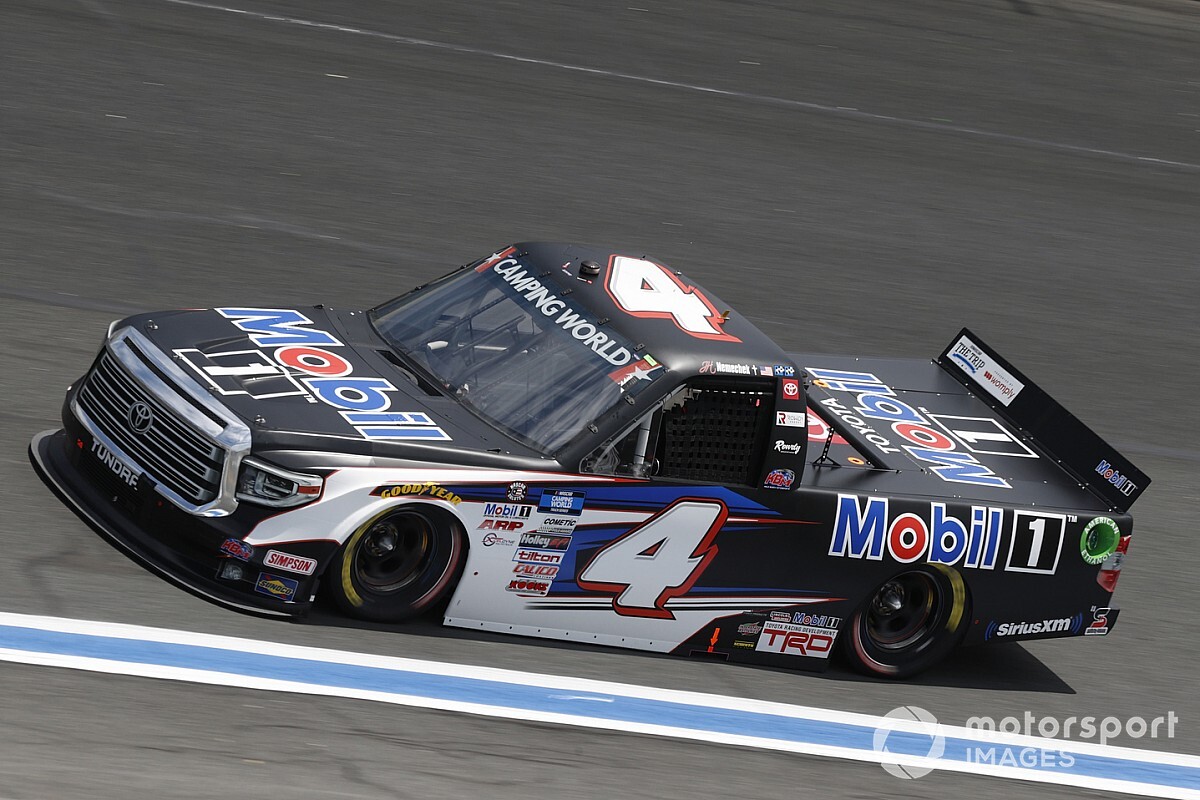 Nemechek was comfortably in command late in Friday night’s N.C. Education Lottery 200 at Charlotte Motor Speedway when his No. 4 Toyota was hit by debris from a nasty wreck between Johnny Sauter and Trey Hutchens III on Lap 115 of 134.

Despite the damage to the roof of his truck, Nemechek was able to hold off Carson Hocevar over the final 10 laps and held on for his ninth career victory.

With the win, Nemechek also collected the final $50,000 bonus this season from the Triple Truck Challenge.

It was an eventful day for Nemechek, who tagged the wall and damaged his truck in the first two laps of Friday morning’s practice session.

“We only ran about 10 laps total in practice,” Nemechek, 23, said. “Hats off to all my guys that work on this thing. I’m just so thankful and blessed to be in this spot.

“How about this crowd? It’s awesome to have all you guys back. It’s so cool to have the crowd here.”

Hocevar’s runner-up finish was a career-best in 19 races.

“I’ve never been in that position too many times, I just let it slip away,” he said. “I finally caught (Nemechek) in the last few laps, but it was one or two too late. I don’t know if I could have cleared him, but I could have put up a fight.

Ben Rhodes was third, Stewart Friesen fourth and last weekend’s winner at Circuit of the Americas, Todd Gilliland, rounded out the top-five.

Following the break between Stages 2 and 3, most of the lead-lap trucks pit with Austin Hill the first off pit road.

The race returned to green on Lap 69 with Hocevar out front followed by Friesen and Grant Enfinger. Austin Hill, the first off pit road, lined up 12th.

Friesen powered to the lead through Turns 1 and 2 on the restart to grab the lead only to see Nemechek use a three-wide move on the backstretch on Lap 70 to return to the top spot.

With 50 laps remaining in the race, Nemechek had built up a 1.6-second lead over Hocevar while Friesen ran third.

Several lead-lap trucks kicked off a round of green-flag pit stops on Lap 101 to take on tires and fuel to make it to the end of the race.

Once the cycle of stops was completed on Lap 114, Nemechek remained in the lead but Austin Hill had made his way up to second.

On Lap 115, Trey Hutchens III slowed dramatically coming off Turn 4 after hitting the wall and Johnny Sauter slammed into him nearly at full speed. The impact destroyed the right-side of Sauter’s truck and did significant damage to Hutchens’ No. 14. Both drivers were unhurt.

Drew Dollar and Nemechek also appeared to receive some damage from debris scattered in the incident.

A handful of trucks elected to pit under the caution. When the race returned to green on Lap 125, Nemechek remained in the lead followed by Austin Hill and Hocevar.

Hocevar moved back into second on the restart as Austin Hill struggled to keep pace. Rhodes moved into third.

With five laps remaining, Tanner Gray tagged the wall but the race remained green with Nemechek out front with a half-second lead over Hocevar.

Zane Smith held off Austin Hill in a one-lap dash to claim the Stage 2 win.

Majeski was third, Kraus was fourth and Ryan Truex rounded out the top-five.

Sheldon Creed easily bested Gilliland to take the Stage 1 win, his first of the 2021 season.

Nemechek was third, Austin Hill fourth and Zane Smith rounded out the top-five.