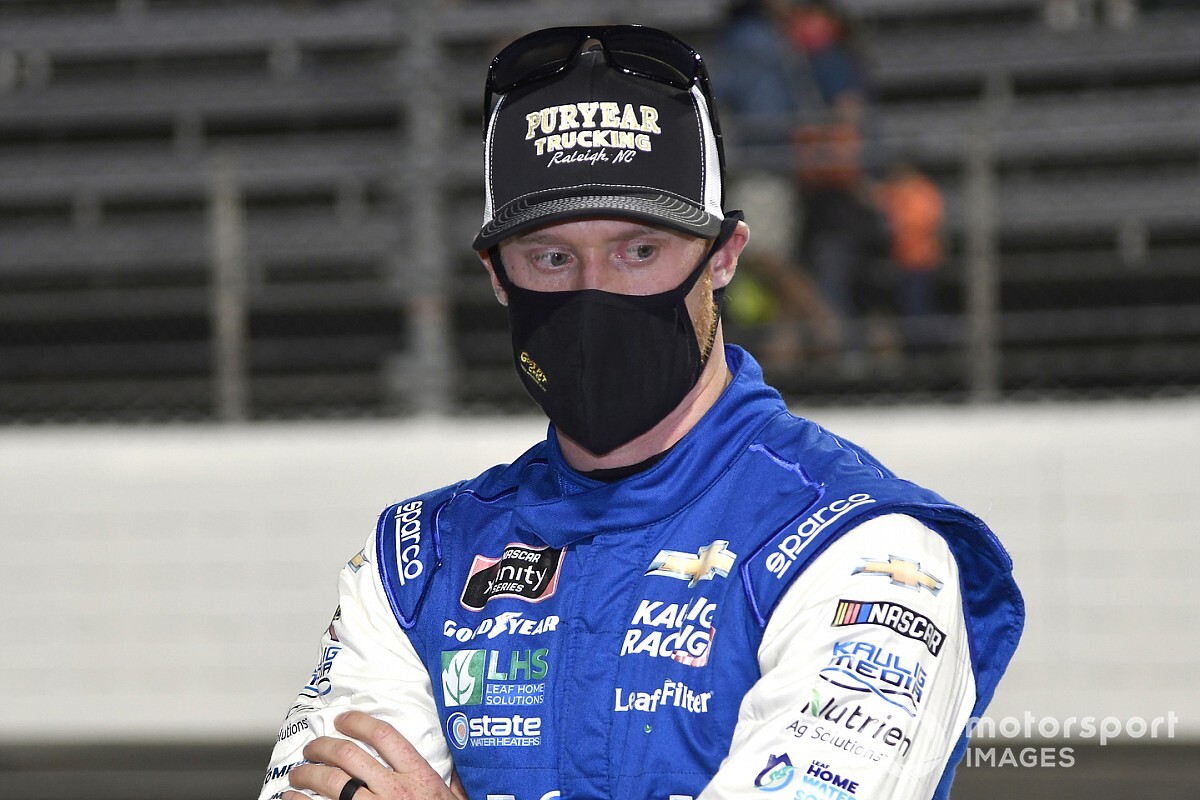 Jeb Burton had spent much of Saturday’s race swapping the lead with Austin Cindric and he remained out front during a caution on Lap 85 for a multi-car wreck on the backstretch.

Just as the race was set to resume on Lap 90 of the scheduled 113 laps, heavy rain erupted all over the track. With no lights, there was no time to dry the track even if the rain stopped, so Burton was declared the winner at Talladega (Ala.) Superspeedway.

The win is the first of his Xfinity Series career. While Saturday was his 51st career start, this is his first season running fulltime in the series, driving the No. 10 Chevrolet for Kaulig Racing.

“I’m trying not to cry. These guys, they deserve to win … Matt Kaulig, Chris Rice, just unbelievable,” an emotional Burton said in the makeshift Victory Lane. “They won all year last year and I came close.“

Cindric ended up second, A.J. Allmendinger was third, Riley Herbst was fourth and Ryan Sieg rounded out the top-five.

Gragson was the highest finisher among the four drivers eligible and collected the $100,000 Dash 4 Cash bonus for the second consecutive race. Jeb Burton, Cindric, Allmendinger and Herbst will be eligible for the next bonus.

Following the break between Stages 2 and 3, the lead-lap cars all pit with Gragson the first off pit road.

On the restart on Lap 56, Gragson was followed by Snider, Cindric, Brandon Jones and Josh Berry.

Working the outside lane, Snider got past Gragson on the restart and moved into the lead for the first time in the race.

Cindric reclaimed the lead on Lap 58 as Gragson got shuffled back in the field and Berry moved to second.

Several lead-lap cars hit pit road on Lap 70 to make a green-flag pit with most taking on just fuel to make it to the finish of the race.

On Lap 76, Berry suffered a flat tire and spun to bring out a caution.

The race returned to green on Lap 80 with Harrison Burton leading the way followed by Cindric and Jones.

With 30 laps to go, Jeb Burton returned to the lead with Allmendinger close behind in second and Snider in third.

On Lap 85, Joe Graf Jr. fell off the pace with a flat tire on the backstretch and drifted up and into Michael Annett, which triggered a multi-car wreck that also collected Jones and Ty Dillon. Several other cars also suffered superficial damage.

Just as the race was set to return to green, heavy rain – which had been threatening for hours – engulfed the track and NASCAR called the race and Jeb Burton the winner.

Gragson powered around Cindric off Turn 4 and grabbed the lead on the final lap to win Stage 2.

Following the break between Stages 1 and 2, all the lead-lap cars pit with Jeb Burton the first off pit road. Brett Moffitt was penalized for an uncontrolled tire and had to restart the race from the rear of the field.

On the restart on Lap 30, Jeb Burton was followed by Haley, Hemric, Cindric and Jones.

Cindric powered ahead to reclaim the lead on Lap 38 as Jeb Burton dropped to second and Ty Dillon moved to third.

With 10 laps to go in the stage, Dillon moved into the second position and looked to challenge the leader.

A three-wide battle erupted for the lead on Lap 41 with Jeb Burton ahead at the line. Cindric came back on the following lap to get the nose of his No. 22 Ford back out front.

With two laps remaining, Cindric remained in command with Gragson having moved back up to second.

Haley worked his way around Gragson on the final lap to come away with the Stage 1 victory.

Cindric started on the pole but Daniel Hemric wasted little time grabbing the lead on Lap 1 with a shove from Harrison Burton.

With 10 laps remaining in the first stage, Hemric continued to lead the way with a small advantage over Cindric. Gragson ran third, Harrison Burton fourth and Jones fifth.

On Lap 16, Gragson got around Hemric to lead the race for the first time. Hemric reclaimed the lead on the next lap with a move on the outside.

Cindric used a slingshot move to grab the lead for the first time on Lap 20 as Gragson moved into second. Gragson retook the lead on Lap 21.