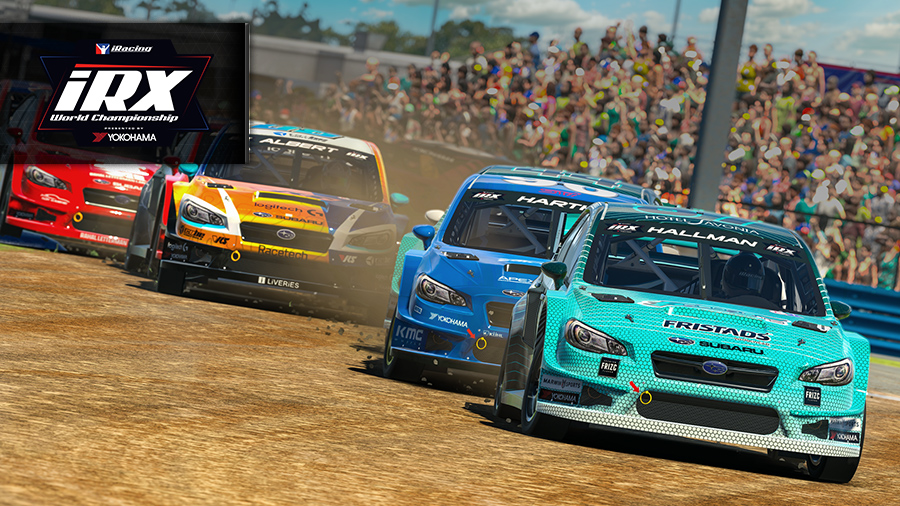 After four spring invitational races to help set the stage, the 2021 iRacing Rallycross season proper begins on Wednesday with a visit to Daytona International Speedway. The first of nine rounds for both the World Championship and All-Star Invitational divisions, one of iRacing’s first rallycross circuits launches both divisions into an exciting season. Races will begin at 4PM ET/1PM PT at iRacing.com/live and across a large slate of Facebook, Twitch, and YouTube channels.

Check out the preseason show above and read on for even more information!

With four powerful new franchises—Rahal Letterman Lanigan Racing, Logitech G Altus Esports, Vermont SportsCar, and Elliott Sadler eSports—the iRX WCS field has a slightly different look for 2021, but that look changes even more when you look at the new driver roster. A double-digit rookie class should add plenty of intrigue to what was already an enthralling championship, as do a set of contingency awards including the Yokohama Pole Award, DirtFish Rookie of the Year, Hard Charger, and Most Improved Driver, each of which comes with a $100 cash bonus at the end of the season.

The full driver roster with teams is below:

The first All-Star round of the year will look quite different from past events. Real-world racing stars like NHRA champion Ron Capps and ARX2 champion Conner Martell will be joined by popular streamers like Quirkitized and GoProLopez, as well as top iRacing pros from other disciplines who are completely new to rallycross. A list of this week’s invitees is below; entries are subject to changes and additions:

New for 2021, iRX will be broadcast in four languages from the start of the season. Here’s where to tune in!