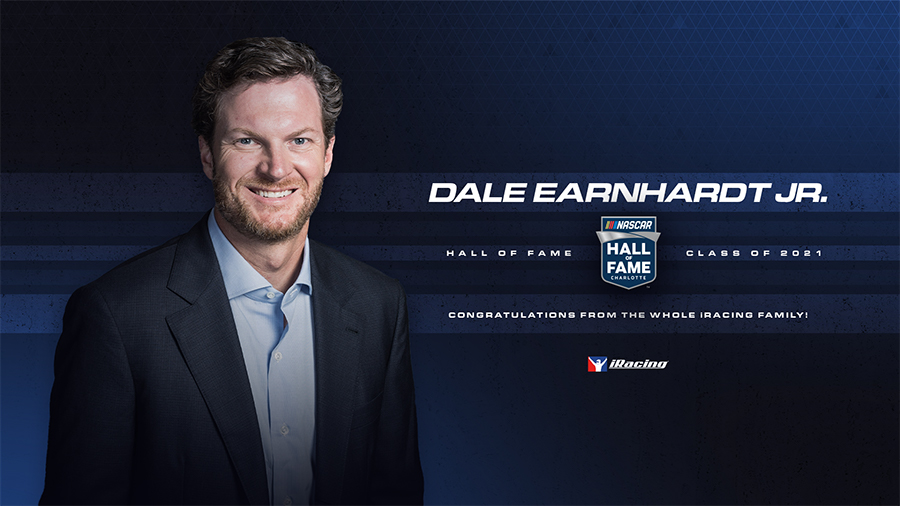 iRacing would like to congratulate executive director Dale Earnhardt Jr. on his induction into the NASCAR Hall of Fame tonight as part of the Class of 2021. The induction ceremony from Charlotte can be streamed live at 8PM ET on Peacock.

Following in the footsteps of his grandfather and father before him, Earnhardt Jr. was one of the most beloved NASCAR drivers of the 21st century. Ascending to the Cup Series in 2000 after back-to-back titles in what is now known as the NASCAR Xfinity Series, he won his first career Cup race in just his 12th start in the series, and later that year became the first rookie to win the sport’s All-Star Race.

In a full-time career that extended through 2017, Earnhardt Jr. won 26 Cup races, including two Daytona 500 victories in 2004 and 2014, and a dominant run of superspeedway victories in the early 2000s. He finished in the top five in Cup Series standings four times, with a best finish of third in 2004. He also earned 15 straight Most Popular Driver awards thanks to an approachable personality and appreciation for the fans that transcended the racetrack.

After his driving career, Earnhardt Jr. has worked tirelessly to continue promoting the sport. As an analyst with NBC Sports, he is an integral part of that network’s NASCAR coverage throughout the year. His podcast The Dale Jr. Download is an auto racing industry standard, while television series like Back in the Day and Lost Speedways have helped to preserve the history of stock car racing.

With iRacing, Earnhardt Jr. has been instrumental to many of the company’s greatest stock car achievements, from winning the first race in the history of the eNASCAR Coca-Cola iRacing Series to helping bring vintage content like 1987 NASCAR Cup Series cars and North Wilkesboro Speedway into the sim. He brokered iRacing’s first meetings with NASCAR within his race shop, and has on multiple occasions been single-handedly responsible for securing NASCAR vehicles to scan. JR Motorsports, Earnhardt Jr.’s real-world NASCAR Xfinity Series team, has held an eNASCAR franchise since their introduction in 2019, and Earnhardt Jr. himself can often be found sampling a wide array of vehicles on the service.

From all of us at iRacing, congratulations, Dale!