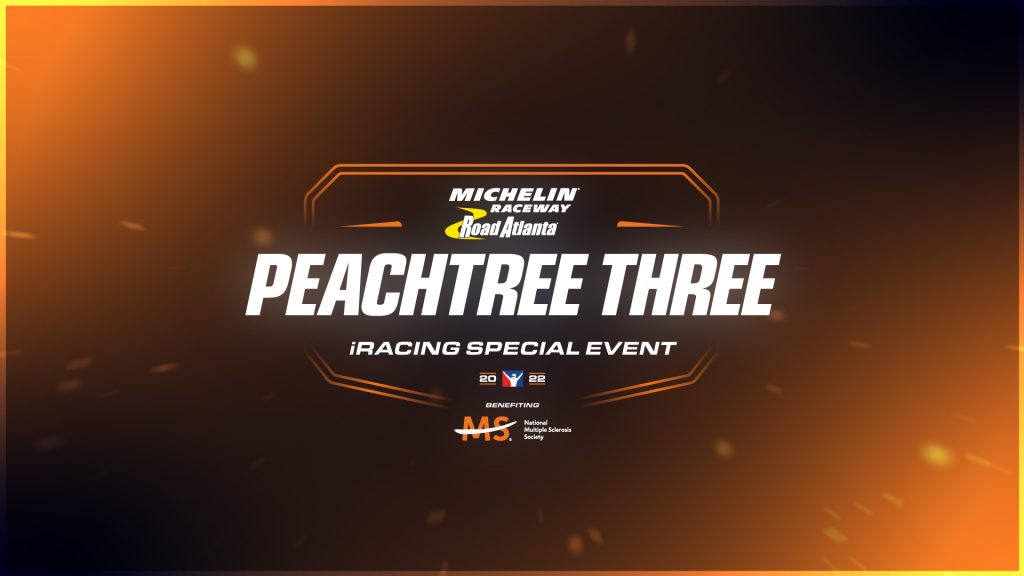 On Thursday, July 14, iRacing will partner with the National MS Society to put on a unique special event to raise money for charity for the second consecutive year. This year’s event, the Peachtree Three Benefitting the National MS Society, will send teams to Michelin Raceway Road Atlanta for three hours of racing in the Chevrolet Corvette C8R GTE, Global Mazda MX-5 Cup car, and iRacing’s fleet of GT4 vehicles.

The Peachtree Three Benefitting the National MS Society will run in four time splits. The first and broadcast split will run on July 14 at 8PM ET (midnight GMT on July 15), followed by 11PM ET (3:00 GMT), 6AM ET Friday (10:00 GMT), and 2PM ET Friday (18:00 GMT). Be sure to tune in to the broadcast split, as other behind the scenes info may appear from time to time with special appearances by iRacing President Tony Gardner and Executive Producer Greg Hill.

Last year, iRacing and the National MS Society teamed up to put on a three-hour event for charity at Charlotte Motor Speedway, raising more than $57,000 for the organization when all was said and done. iRacing executive vice president Steve Myers, seven-time NASCAR Cup Series championship-winning crew chief Chad Knaus, and 2020 eNASCAR Coca-Cola iRacing Series champion Nick Ottinger teamed up for the first time last year, and will return to compete together again this year; whichever split the trio ends up in will be the broadcast split across iRacing channels.

New for 2022 will be multiple purchasable advantages made available to any team that runs in the same split as Myers, Knaus, and Ottinger. From cautions and wave arounds to keep yourself in contention to black flags to level the playing field, these options will be made available only in exchange for donations to the National MS Society. Teams from that split will also have the opportunity to make a larger donation to add their driver names to the iRacing AI roster.