Harvick: Fontana will be “trial by fire” for NASCAR Next Gen tires

Harvick, who got wrecked out of last Sunday’s Daytona 500 and finished 30th, believes the two-mile track will prove an “aggressive” test for the new-sized tires, which feature a much lower-profiled sidewall.

He believes that no amount of pre-race simulation can prepare for the demands that lie ahead in this Sunday’s 400-miler in California.

“When you go to Fontana, a two-mile racetrack where you have the most aggressive tire falloff of all the racetracks we go to, it’ll be trial by fire,” said Harvick. “It’s just not like anything else, and not knowing about the car, that’s where I go back to practice and make sure that you’re involved in everything that’s going on, because making sure that you take care of the tires, and making sure you can make them last, is going to be extremely important.”

Harvick thinks that tire management will be the key to success at Fontana, as the track hasn’t been resurfaced since it was built in 1997.

“It’s always tire management, it’s always moving around the racetrack – being able to run the top and the bottom – but this car is so different in the way that it uses the tires, and the way it uses the right-rear tire, especially,” said Harvick. “I think as you look at that, it could turn into a tire conservation type of situation to where just have to pick a speed and run the speed so you can make it through a whole fuel run. You just don’t know those things until you go do it, so being able to adapt and adjust is going to be important.” 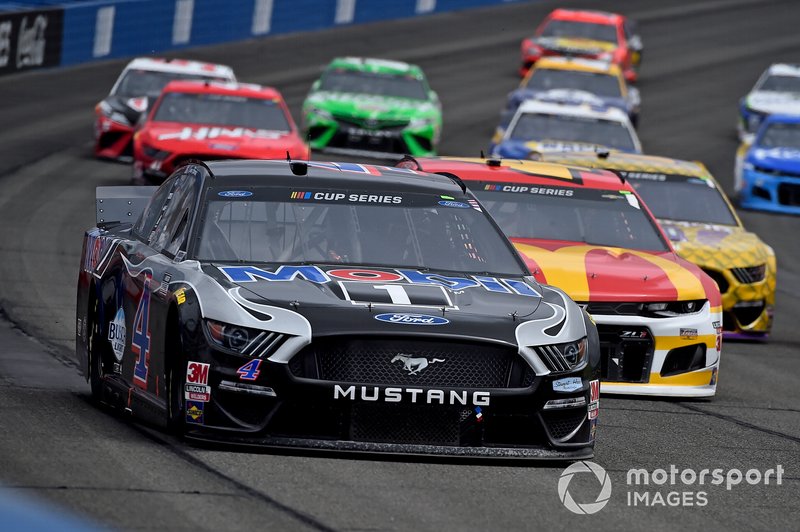 Harvick said he has no concerns over the spares supply chain issues that teams have faced in the off season with the new car going into Fontana. However, accidents there or at the other two events in NASCAR’s early-season West Coast swing – Las Vegas and Phoenix – could create headaches if cars get torn up and valuable development time is lost to repair work.

“I think for Fontana, because it’s the first one, you’ll be prepared from the shop,” said Harvick. “When you go from the first race to the second race to the third race, you’re probably going to spend some time in one of those two racetracks’ garages working on the vehicle, preparing it for the next week.

“So our trailers and things are prepared well, but it’s not like working in your shop. There’s going to be a lot of racetrack garage and parking lot work that will go on.

“Between the Daytona 500 and the West Coast swing, you can put a huge damper on the first half of your year if you’re not careful, just because of the fact that the progression with the car has to be there. If everything’s torn up, the progression of the car slows down because our sport is all about details, and you can’t detail the car to the point that it needs to be detailed in order to make it run as fast as it needs to run.

“Not having torn-up racecars is as important as anything in coming home from the West Coast swing.”