Hamlin said his new-found interest in F1 has come from several of his friends paying attention to it and by watching “Drive to Survive,” a popular documentary series produced in a collaboration between Netflix and Formula One to give a behind-the-scenes look at the sport.

“I think this year I’ve probably watched more (F1) races than I have my whole life, for sure. Some of that is driven by social media. My friends are tuning into it. You see that the American press is giving it more attention this year,” Hamlin said.

“Obviously, when you see a buzz or see something on social media about it, you want to kind of tune in and see what’s going on. That’s kind of driven my interest in it, more so than anything.”

Hamlin said his involvement with Netflix in a documentary on driver Bubba Wallace and his first season with 23XI Racing, which Hamlin co-owns with NBA legend Michael Jordan, also encouraged him to check out “Drive to Survive.”

“It certainly made me tune into that to see how they did the production on that and certainly it came across with some good storylines,” he said. “Certainly, I’m a person that will turn into that series as it continues.”

Hamlin, who remains in contention to win his first series championship this year, said NASCAR needs to find a way to make its race weekends more of a “show,” and capitalize on the more competitive racing found in NASCAR.

“It’s crazy because you know – you’ve got probably a 90 percent chance of picking which two guys are going to win (each F1 race). This year has been a little bit different with craziness going on, but there is two people that can win, two teams that can win,” Hamlin said. “There is not much side-by-side racing, as compared to NASCAR, but yet fans and media love it.

“When you talk about how critical fans or media or whoever might be of our racing in NASCAR, it’s head and shoulders above anything going right now. The show is good. Why can’t we get people to turnout?

“Texas was just a big disappointment seeing what was up in the stands there, and yet we are talking about the biggest crowd in history showing up for the COTA F1 race next week. So, there is some kind of disconnect that’s going on that’s not making this deal work.” 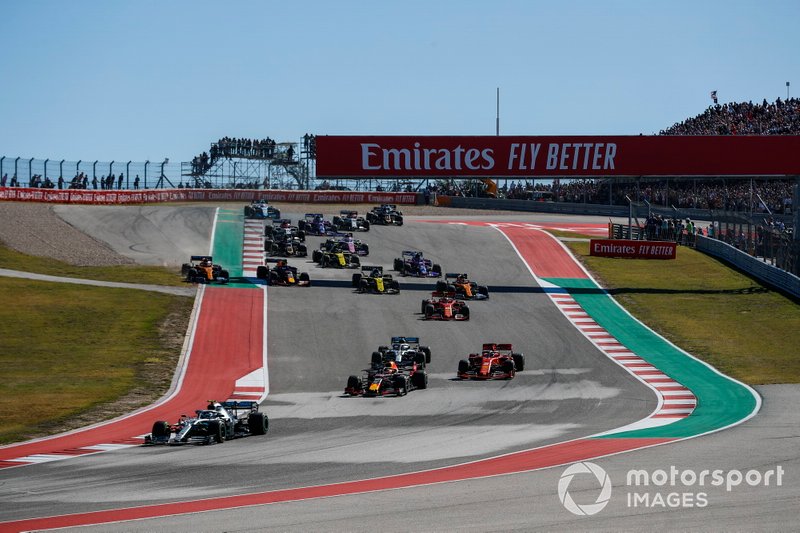 There have, of course, been several sold-out and highly attended NASCAR Cup races in the 2021 season but the atmosphere generated around each weekend varies from track to track.

There remain several protocols in place from the COVID-19 pandemic that limit the number of people in garages and on pit road before races. All but eight race weekends in the Cup series did not have practice or qualifying this year.

In addition, many sponsors cut their at-track activation during the height of the pandemic and not all have returned to former levels.

Hamlin, 40, believes NASCAR can learn something from how F1 is able to maintain the “hype” surrounding its events, even if the racing on the track isn’t as competitive.

“I would love to see us have more of an F1-style approach to a race weekend and how we host hospitalities, parties, just all of those things,” Hamlin said.

“There’s just got to be more to it than us showing up and racing like we are doing right now.”