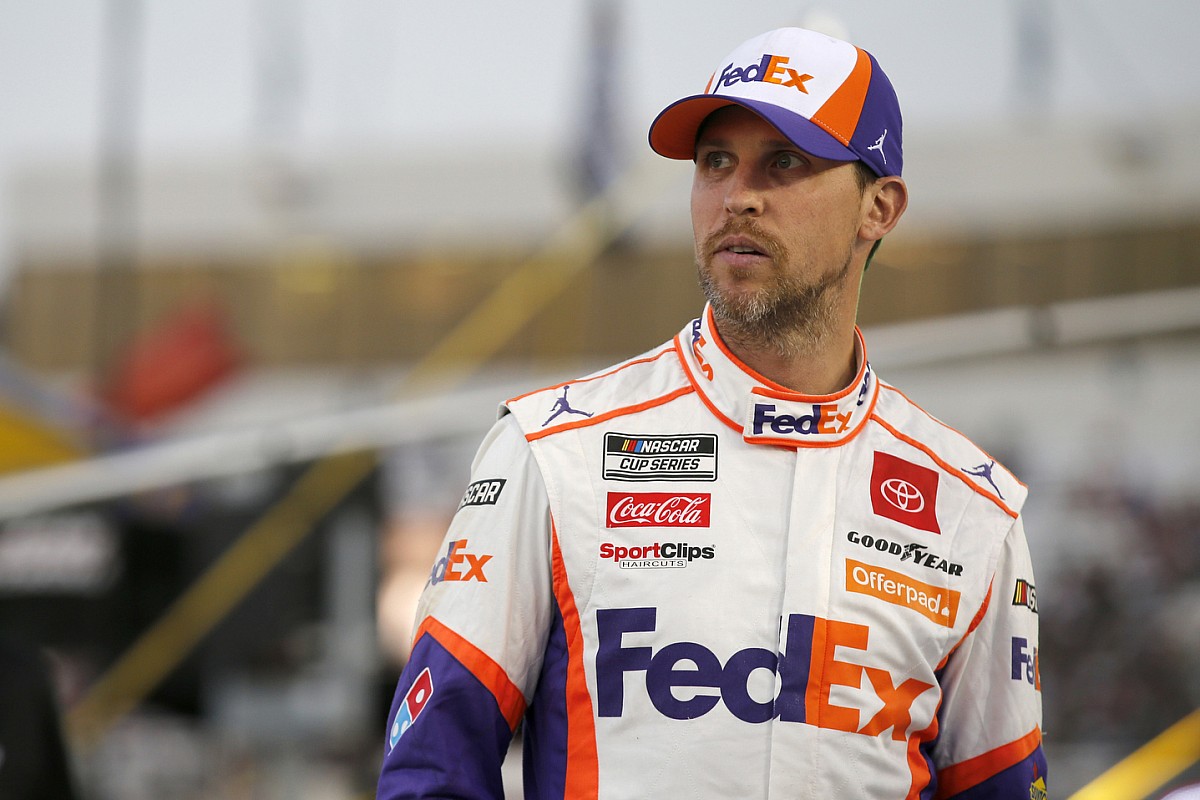 Hamlin went winless in the 2021 regular season but with a dominating victory in Sunday night’s South Point 400 at Las Vegas Motor Speedway, he has now opened the first two rounds of the series playoffs with victories.

Sunday’s win means Hamlin advances to the semifinal round of the Cup playoffs regardless of how he finishes in the next two races – at Talladega, Ala., and the Charlotte Roval.

With the final stage going caution-free, Hamlin successfully navigated a round of green-flag pit stops and cycled back to the lead on Lap 229 of 267.

Elliott was able to cut Hamlin’s lead to about half-a-second in the final laps but never got close enough to challenge for the top spot.

“Yeah, so happy for our team. The Toyota team, Joe Gibbs Racing, just gives us great race cars. That’s what I’m so proud of, is to drive for those guys,” Hamlin said. “Can’t thank them enough for everything they do.

“Vegas, it feels so good to win in Vegas. Last couple times I’ve been so close, just didn’t have the right breaks. They dialed the car in great. Great to hold those guys off.”

Asked about being locked into the semifinal round of the playoffs, Hamlin said, “I’m so happy. So happy to not have to worry about the next two weeks. I’m a professional so I’m going to work just as hard each and every week to win.”

The win is the 46th of Hamlin’s career and first at Las Vegas.

Larson continues to lead the playoff standings by 14 over Hamlin. The current last four in danger of elimination following the Charlotte Roval race are William Byron, Harvick, Alex Bowman and Christopher Bell.

Following the break between Stages 2 and 3, the lead-lap cars pit with Hamlin the first off pit road. On Lap 167, Hamlin was followed by Truex, Reddick and Kyle Busch.

Truex quickly went to the inside on the restart and came away with the lead. Hamlin returned to the front the next lap.

With 80 laps remaining in the race, Hamlin led Reddick by about half-a-second as Truex ran third and Elliott fourth.

On Lap 210, several cars had begun a final round of green-flag pit stops to take on tires and fuel to make it to the end of the race.

Elliott, Byron and Blaney all pit on Lap 213 while Hamlin hit pit road on Lap 214. Bowman was forced to pit a second time under green for broken valve stem on his left-rear tire. He returned to the track two laps down and in 28th.

Byron was forced to pit under green on Lap 225 for a flat tire. Once he returned to the track, he was running 22nd and two laps down.

Once the cycle of stops was completed on Lap 229, Hamlin returned to the lead followed by Elliott, Truex, Kyle Busch and Reddick.

With 30 laps remaining, Hamlin remained out front but Elliott had cut his lead to under a second and was quickly gaining ground.

With 20 laps to go, Hamlin had expanded his lead over Elliott again to more than 1.7 seconds while finally re-entered the top-10.

Elliott had cut the lead to about a half-second with five laps remaining but didn’t appear he would able to challenge Hamlin for the lead.

Hamlin held on while many others were forced to pit under green for fuel and took the Stage 2 win over Kyle Busch.

Following the break between Stages 1 and 2, all the lead-lap cars pit with Hamlin the first off pit road.

The race resumed on Lap 88 with Hamlin out front followed by Larson, Elliott and Blaney.

Larson went high off Turn 2 on Lap 89 and managed to get around Hamlin for the lead despite Hamlin’s efforts to block his advance.

Byron took the field three-wide, diving to track’s apron on Lap 92 and came away with the lead for the first time in the race.

Right after that, Joey Gase spun in Turn 1 after having a left-rear tire come off his No. 15 car and smashed into the Turn 2 wall, destroying the car and bringing out a caution.

A handful of cars pit but Byron remained in the lead on the restart on Lap 99 followed by Larson and Blaney.

Larson reclaimed the lead quickly on the restart as Elliott moved to second. Elliott got side-by-side with Larson and took the lead on Lap 102 only to see Larson take it back on Lap 103.

With 30 laps remaining in the second stage, Larson had built a 2.2-second lead over Byron as Kyle Busch ran third and Hamlin fourth.

On Lap 133, Elliott and Byron kicked off a round of green-flag pit stops as teams took on new tires and fuel to make it to the finish of the stage.

With 20 laps left in the stage, Larson remained out front with a more than 2-second advantage over Hamlin as several more drivers pit for tires and fuel under green.

On Lap 154, Larson, Blaney and Matt DiBenedetto made their respective green-flag stops.

Once Larson got the lead, he took command and easily held off Kyle Busch by 1.165 seconds to take the Stage 1 win.

Hamlin was third, Blaney fourth and Byron rounded out the top-five.

Larson started on the pole but Blaney quickly powered to the lead on Lap 1 and Hamlin moved into second behind him.

On Lap 8, Hamlin got around Blaney to take the lead as Kyle Busch ran third.

Byron, who started from the rear of the field, entered the top-10 on Lap 19.

NASCAR displayed a competition caution on Lap 26 to allow teams to check tire wear. All the lead-lap cars pit with Kyle Busch the first off pit road.

The race returned to green on Lap 31 with Kyle Busch followed by Hamlin and Larson. Hamlin quickly reclaimed the lead on the restart.

After hounding him for several laps, Larson passed Hamlin on Lap 45 to grab the lead for the first time since starting the race on the pole.

With 25 laps remaining in the race, Larson had built almost a 1-second lead over Kyle Busch with Hamlin in third.

With laps to go, Larson’s lead over Kyle Busch had grown to 2 seconds as Hamlin remained in third.

Byron, Truex, Aric Almirola and J.J. Yeley all had to start the race from the rear of the field for multiple pre-race inspection failures. Yeley also had to serve a pass-through penalty at the start of the race and his car chief was ejected from the track.