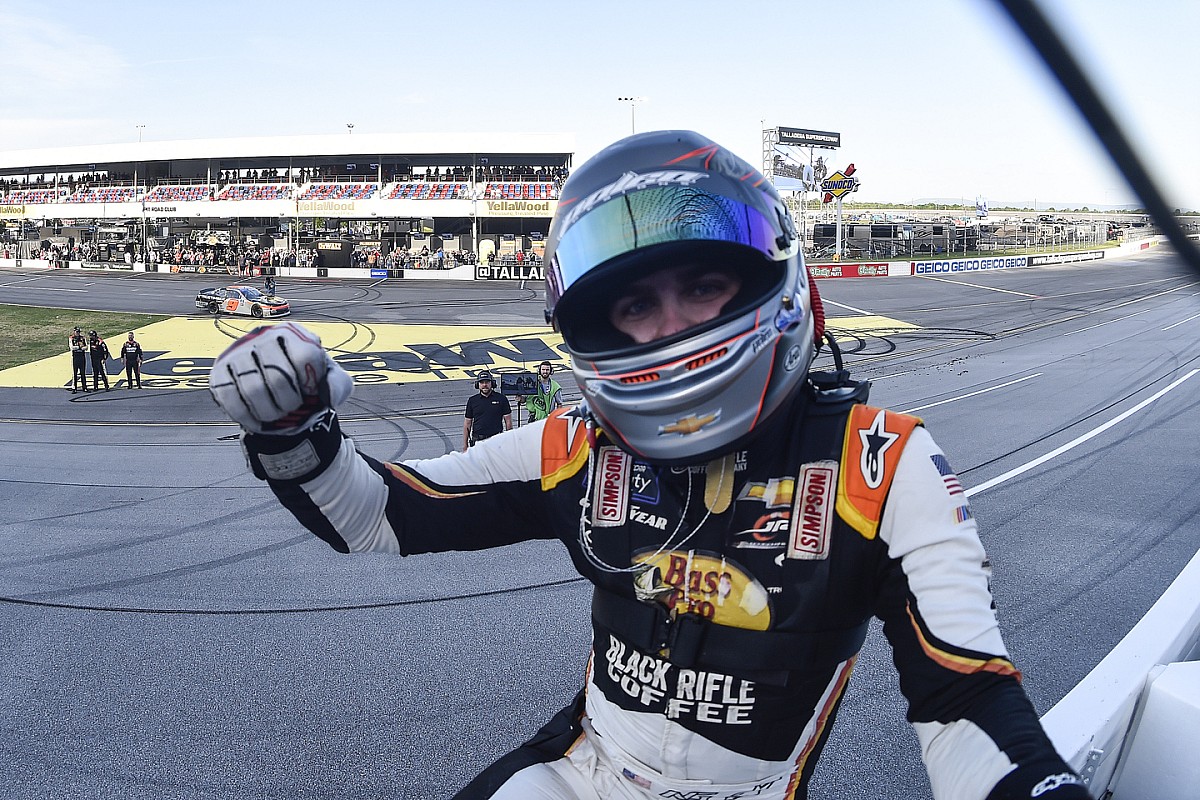 Entering the third, two-lap overtime, Justin Allgaier led the way with Gragson in fourth and Jeffrey Earnhardt lined up eighth.

As the field came to green, Allgaier ran out of fuel and Gragson powered into the lead. With one lap remaining, Earnhardt had made his way to second began chasing down Gragson for the win.

With no one to push Earnhardt, Gragson nipped him at the checkered flag by 0.131 seconds for his first win at Talladega (Ala.) Superspeedway and second of the season.

After doing a celebratory burnout, Gragson and his No. 9 JR Motorsports team dashed to climb the frontstretech climb.

“This (car) was awesome. This JR Motorsports team, they never quit,” Gragson said. “We had four really fast cars. Luke Lambert (crew chief) called a hell of a race. It came down to fuel strategy.

“There was one point where I said, ‘I can’t get up there. We just don’t have the car fast enough.’ But we never quit. That’s the most important thing.

“I’m so grateful for all these race fans out there. We’re at Talladega baby! Listen to them! I’m supposed to race tomorrow in the Cup race but Talladega Boulevard sounds a lot better right now to celebrate.”

For Earnhardt, the runner-up finish – his career-best – was bitter sweet. Earnhardt was making his first start in Richard Childress Racing’s No. 3 – a number made famous by his grandfather, the late seven-time Cup champion Dale Earnhardt Sr.

“I just needed a push there at the end. Everyone got spread apart and it’s really hard to build a run by yourself without someone in the back,” he said.

“Unfortunately, our teammates got wiped out early. But man, I’m living a dream here. I was so thankful for this opportunity.”

A.J. Allmendinger finished third and collected the $100,000 Dash4Cash bonus, Landon Cassill was fourth and Anthony Alfredo rounded out the top-five.

Gragson, Allmendinger, Cassill and Sieg will be eligible for the final $100,000 Dash4 Cash bonus of the season next weekend at Dover, Del.

Following the break between Stages 2 and 3, all of drivers pit with Austin Hill the first off pit road. Jones had to restart from the rear of the field for a pit road entry violation.

On the restart on Lap 55, Hill was followed by Sam Mayer and Ty Gibbs.

NASCAR was forced to display a caution on Lap 68 after the bumper cover came off from Josh Berry’s No. 8 and landed on the backstretch.

All the lead-lap cars elected to pit with Gibbs the first off pit road. The race resumed on Lap 72 with Gibbs out front followed by Hill, Sheldon Creed, Gragson and Herbst.

Coming off Turn 4 on the restart, Hill – after a push from Gragson – dropped down in front of Gibbs to reclaim the lead.

On Lap 77, after a push from Ryan Sieg, Gibbs got into the back of Daniel Hemric and turned him into the wall which triggered a multi-car accident that also collected Brandon Jones, Ryan Ellis, David Starr and Drew Dollar.

The race resumed on Lap 82 with Hill out front followed by Creed and Gragson.

Matt Mills hit the wall in Turns 1 and 2 on Lap 97 to bring out the sixth caution of the race. When the race returned to green on Lap 102, Hill remained the leader followed by Allmendinger, Allgaier, Mayer and Jeb Burton.

Dollar got into the back of Jones on Lap 104 which triggered a seven-car wreck to bring out another caution.

Hill continued to lead when the race resumed with four laps to go. He was followed by Allgaier, Burton, Mayer and Herbst.

Coming off Turn 2 on the restart, Allmendinger got into the back of Mayer, which sent him spinning down the track and into Hill, bringing out a caution and an end to both contenders’ races.

Allgaier inherited the lead as the race went into a two-lap overtime. He was followed by Allmendinger, Creed, Burton and Cassill.

As Allmendinger moved into the lead on the restart, Sheldon Creed and Caesar Bacarella wrecked in Turn 3 to bring out a caution and send the race into a second overtime. Allmendinger was followed by Allgaier, Burton, Sieg and Cassill on the restart.

Allgaier jumped to the lead on the restart but Jeremy Clements ran out of fuel and stalled on the track to bring yet another caution and send the race into a third overtime. Allgaier was followed by Allmendinger, Sieg, Gragson and Burton on the restart.

Allgaier claimed the Stage 2 win under caution as a multi-car wrecked erupted with two laps to go.

Mayer was second, Hill third, Jones fourth and Gibbs rounded out the top-five.

Following the break between Stages 1 and 2, most drivers pit but several stayed out and Alfredo led the way when the race restarted on Lap 31.

A shove by Hill put Alfredo back into the lead on Lap 38.

With 10 laps remaining in the stage, Hill led the way followed by Alfredo and Yeley.

As the field raced three-wide, Mayer edged into the lead on Lap 45 as Allgaier moved into second and Jones third.

On Lap 48, Mason Massey got loose and ran into Berry, which triggered a multi-car wreck that collected several contenders, including Chandler Smith and Moffitt.

There was not enough time restart the race before the conclusion of the stage.

Berry held off Gibbs by 0.125 seconds to take the Stage 1 win, his second stage victory of the 2022 season.

Allmendinger was third, Cassill fourth and Hill rounded out the top-five.

Earnhardt started on the pole but Gibbs quickly powered around him to grab the lead on Lap 1.

With help from his RCR teammates, Earnhardt returned to the lead on Lap 5.

On Lap 11, Ellis spun off Turn 2 to bring out the first caution of the race. Several drivers elected to pit but Earnhardt stayed out and remained the leader when the race resumed on Lap 15.

After the restart, Earnhardt failed to up in front of Hill and Hill moved into the lead.

With five laps remaining in the stage, Creed led the way followed by Hill and Allgaier. Hill pulled back into the lead on Lap 21.