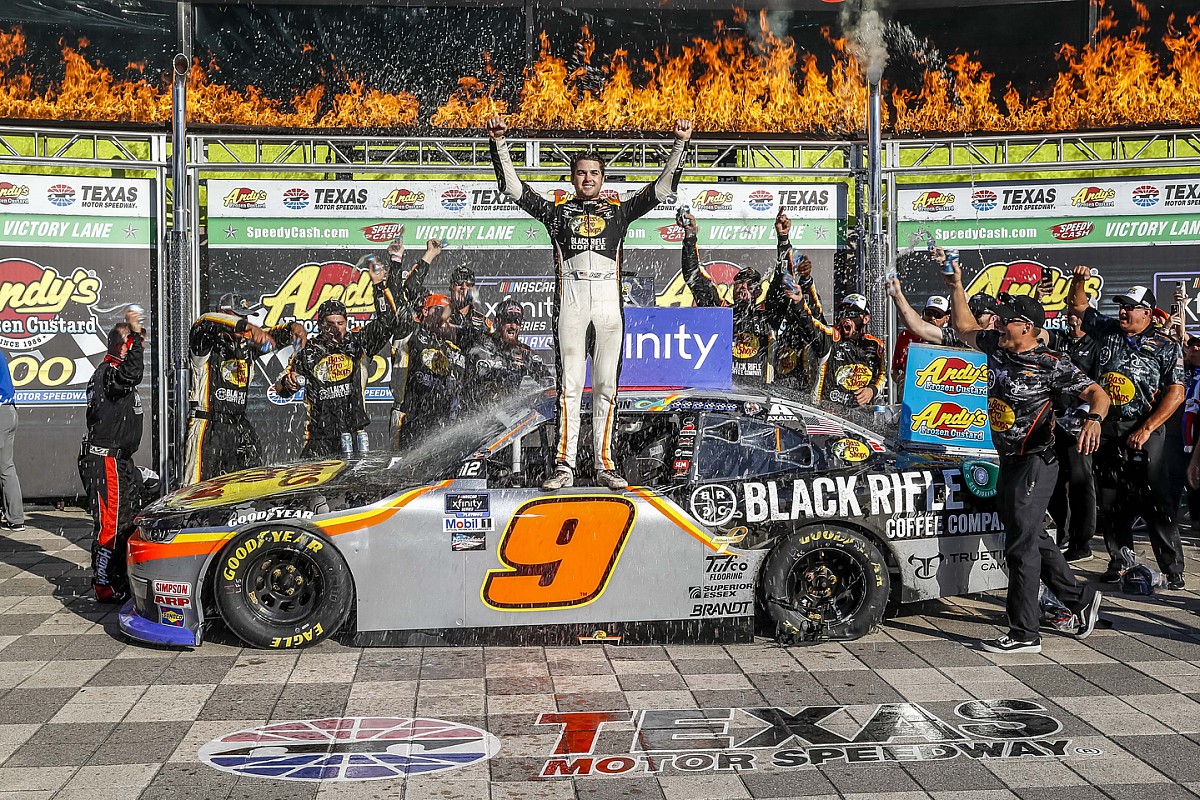 Gragson‘s incredible win streak continues, now having won four consecutive NASCAR Xfinity Series races. It’s a feat none have accomplished since Sam Ard did it back in 1983.

For Gragson, he’s now won a career-high seven races during the 2022 season, locking himself into the Round of 8 with this victory at Texas.

“We just got a badass Bass Pro Shop team,” an elated Gragson after post-race. “This No. 9 team — man they’re on fire. You fans, you keep us motivated to come back and win more races. You guys are awesome. We appreciate you. Thanks for coming out! This pit crew has done awesome, my car was as fast as Xfinity internet all day and just so thankful for the opportunity.”

He later added: “Just really, really fun. Just very grateful. Everybody back at JR Motorsports — we’re working really hard. (Grateful to) everybody back at the fab shop. Just really, really solid effort by really all four teams today. Sucks that the No. 7 got wrecked on that one restart but we had some strong cars. We’re on fire as a team … man, I’m driving my ass off but I’m having fun while we’re doing it. It’s fun when you get to do burnouts and go get some waffles after. Let’s go baby!”

Pole-sitter Brandon Jones led the field to the green flag at the start of the race, but almost immediately, it all went wrong. Jones got turned sideways off the nose of Daniel Hemric, who was trying to push.

Jones was able to gather it up without incident, but rejoined the field back in 20th place. In the stack-up, Parker Retzclaff sustained nose damage.

It was now Gragson leading John-Hunter Nemechek, but Nemechek was able to take the lead for himself on Lap 12.

The first caution of the day came as a result of Jeffrey Earhardt, who lost control while battling for position and slammed the inside wall.

Sam Mayer restarted in the fifth position, but slid up the track and hit the outside wall soon after.

A spin by McLaughlin then set up a three-lap dash to end the stage. Nemechek, Gragson, Gibbs, and several others sacrificed stage points in favor of pitting.

About a dozen drivers stayed out, led by Hemric. He held on to take the stage win ahead of Justin Allgaier, A. Hill, Gragson, Allmendinger, Berry, Nemechek, Sieg, Gibbs, and Kyle Weatherman.

Although he was about to cycle into the lead following the stage break, Gragson instead had to pit again in order to tighten some lug nuts.

It was now Nemechek and Gibbs left to go back-and-forth for the race lead, with Nemechek ultimately gaining the upper-hand.

Gragson was charging back through the field, but continued to complain about a vibration.

A cut right-front tire for David Starr set up yet another sprint to end the stage. Gragson led the contingent of drivers who pitted while Hemric once again led about eight drivers who opted to stay out.

During the caution, playoff surprise Jeremy Clements lost power and was forced to go behind the wall.

“No idea (what happened,” said Clements. “I was just riding under caution and our Chevy cut off. And then that was it. Don’t really know what’s wrong with it. What a shame. That really sucks. It hurts bad. Had the same problem in the beginning of last year’s playoffs but it was a wreck, so not where we want to be. Have to go to Talladega and win somehow … that really stings.”

On the ensuing restart, Hemric lost the lead to his Kaulig Racing teammate Allmendinger, who went on to take the stage win. Akinori Ogata also spun just after the restart, but the race remained green.

He was followed by Gragson, Nemechek, Hemric, Gibbs, A. Hill, Allgaier, Sieg, Jones, and Mayer.

Gragson was back in control of the race, leading Nemechek and Gibbs. Another spin by Ogata put the race back under yellow.

Brandon Brown tried to move up on the restart, but wasn’t quite clear of A.J. Allmendinger. They collided on the backstretch, igniting a multi-car accident that collected several other drivers. Among those involved beyond Brown and Allmendinger were Landon Cassill, Ryan Sieg, Stefan Parsons, and Joey Gase.

The race went back green with 84 laps to go, only for absolute chaos to erupt. The leaders battled three-wide for the lead, and Nemechek got loose. Allgaier was close to making it four-wide for the lead and could not avoid Nemechek, which was the beginning of a massive crash that collected fellow playoff drivers Jones and Hemric.

“The No. 7 (Allgaier) chose the top behind me,” explained Nemechek. “He started pushing, the 21 (Austin Hill) made it three wide. I was in the resin, I think we ended up four-wide at one point, which doesn’t really work, the aero was packed, the track was slick up there. I don’t know, it sucks.”

The following run did not last long either, as Garrett Smithley wrecked in the back after getting turned by Weatherman, Myatt Snider also got a piece of it.

Eventually, the race got back into the rhythm of green-flag running. Gibbs was in pursuit of Gragson, but slid up the track and lost several seconds.

The leaders kicked off green-flag pit stops with 45 laps to go. Allmendinger and Berry ran long, finally pitting with 18 laps to go. Both went for a fuel-only call.

Gragson didn’t cycle back into the lead until 11 laps to go, passing Jeb Burton who still needed to pit.

Hill gave chase, but was unable to catch Gragson as he cruised to the checkered flag, securing his seventh win of the 2022 season.